NASA Deputy Administrator: UArizona a 'Crown Jewel' for the US 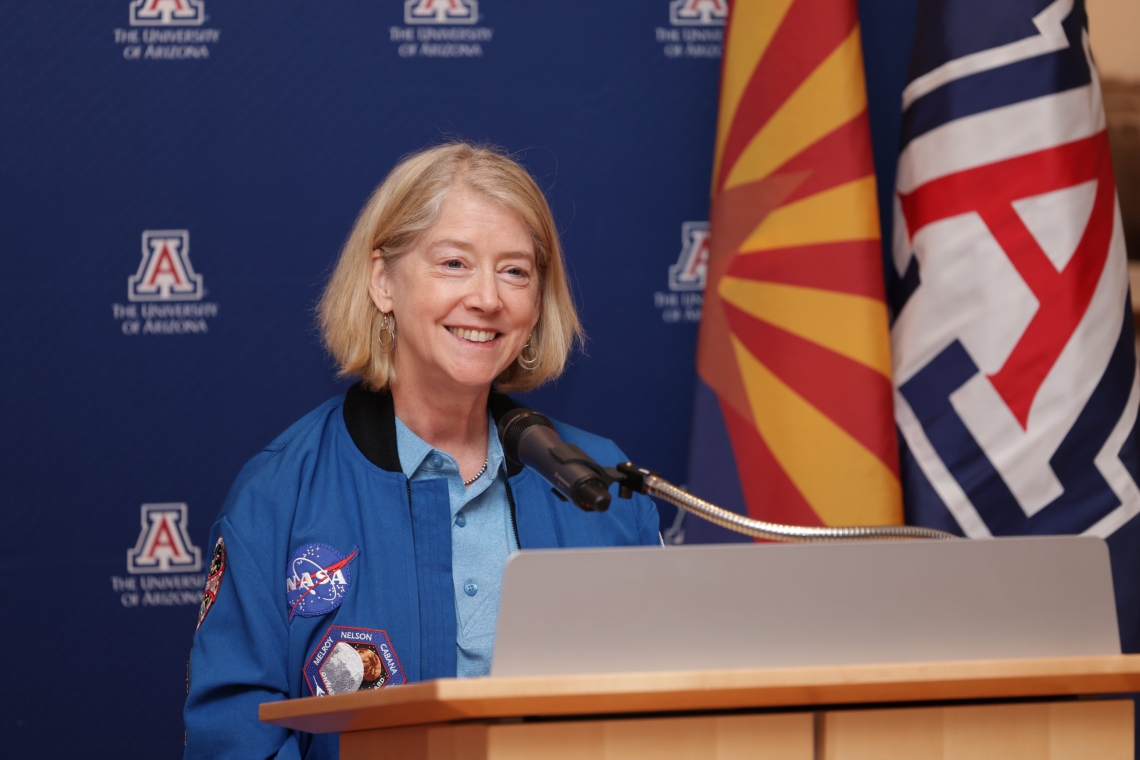 By Daniel Stolte, University Communications - May 6, 2022

NASA Deputy Administrator Pam Melroy visited the University of Arizona Friday to meet with Senior Vice President for Research and Innovation Elizabeth "Betsy" Cantwell and eight campus researchers involved in some of the space agency's largest and most impactful missions. During a press conference immediately following the meeting, Melroy discussed the university's critical role in NASA projects.

Melroy recognized UArizona as "a huge and important partner for NASA, with a towering reputation in astronomy, planetary science and astrophysics, and world-ranked across all disciplines" and as a "crown jewel for the United States."

"As the world has become more competitive, and we are competing for technological capability around the world, our university system is still the envy of the rest of the world, and the University of Arizona is a critical piece of that," Melroy said.

She pointed out the numerous partnerships between NASA and the state of Arizona, which is ranked in the top 10 states for pursuing activities funded by the space agency, amounting to just over $900 million in economic impact and more than 5,000 jobs.

"Some of the most inspiring things and pictures that we have seen over the last couple of years have very strong roots right here," Melroy said, pointing to the James Webb Telescope, or JWST, as the most recent example. UArizona Regents Professor Marcia Rieke is the principal investigator for NIRCam, one of the space observatory's most important instruments.

JWST will provide glimpses into the early universe, during a time when the first stars and galaxies formed, potentially unlocking some of the rules of how the universe works, Melroy said.

The former astronaut, who helped assemble the International Space Station, also shared her excitement about the UArizona-led asteroid sample return mission OSIRIS-REx, and said she looks forward to getting the samples back to Earth next year.

The return of extraterrestrial samples, including moon samples, "are very much on NASA's mind right now," she said, fueled by ambitions to send astronauts back to the moon and, eventually, to Mars.

One of only two women to command a space shuttle, Melroy hinted at future scenarios in which "science is front and center" as humans and machines explore other worlds side by side, and she emphasized the critical mission that institutions like UArizona play in paving the way for such endeavors, particularly with regard to developing technology and educating the highly skilled workforce that will be up to such challenges.

Melroy said she was particularly impressed to hear that current students express an interest in studying the climate on other planets, driven by a desire to glean insights into better understanding our own planet and its potential transformations under the effects of a changing climate.

"The first person to set foot on Mars will be a scientist, and they're alive and in school today," she said.

NASA announced in April that Dani DellaGiustina, a UArizona alumna, would lead the OSIRIS-APEX mission – an extension of OSIRIS-REx mission that will visit near-Earth asteroid Apophis and, like OSIRIS-REx, yield fundamental knowledge about the origin of terrestrial planets and strategies to avoid potential asteroid impacts on Earth.

"The same thing that makes NASA unique," Melroy said, "is what makes UArizona unique: its people."

"The university has been dedicated to the highest-quality scientists, and it has been at the leading edge for a long time," she added. "Even when I was applying to grad schools, this was the place that you wanted to get into."

While on campus, Melroy also expressed her gratitude to U.S. Sen. Mark Kelly's office for helping the university's Alfie Norville Gem & Mineral Museum obtain a lunar rock sample that was picked up by astronaut Jim Irwin during the Apollo 15 mission.

The rock, which is on loan to the university, is currently on display at the museum. "I think NASA can afford to give away a slice of that rock. because we're going back to get more," Melroy said.

During her visit, Melroy heard presentations from the following UArizona researchers: