Surveyor III successfully landed, touching down in the eastern part of Oceanus Procellarum. This spacecraft, like it predecessors, carried a survey television camera and other instrumentation for determining various properties of the lunar-surface material.  In addition, it carried a surface sampler instrument for digging trenches, making bearing tests, and other wise manipulating the lunar material in the view of the television system.

During its mission, completed on May 4, 1967, Surveyor III acquired a large volume of new data and took 6,326 pictures. In addition, the surface sampler accumulated 18 hours of operation, which yielded significant new information on the strength, texture, and structure of the lunar material to a depth of 17.5 cm. 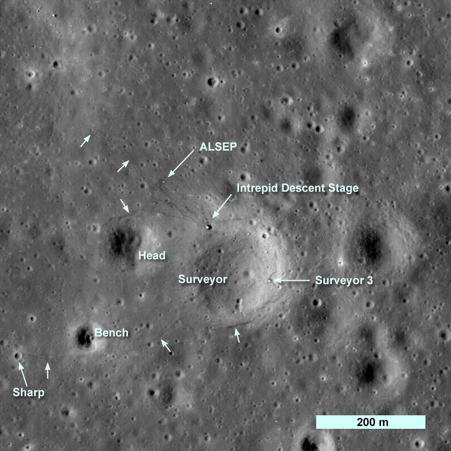 Resources
Surveyor Crater, Before and After
Surveyor 3