Surveyor V landed in Mare Tranquillitatis. This spacecraft was basically similar to its predecessor, except that the surface ampler was replaced by an alpha­ back scatter instrument, a device for determining the relative abundance of the chemical elements in the lunar material. In addition, a small bar magnet was attached to one of the footpads to indicate the presence of magnetic material in the lunar soil.

Because of a critical helium regulator leak in flight, a radically new descent profile was engineered in real time, and Surveyor V performed a flawless descent and soft landing within the rimless edge of a small crater, Mare Tranquillitatis, on a slope of about 20°.

During its first lunar day, which ended at sunset on September 24, 1967, Surveyor V took 18,006 television pictures. The alpha-backscatter instrument provided data from which the first in situ chemical analysis of an extraterrestrial body has been derived.  This analysis showed that the lunar sample was similar to terrestrial basalt. Results of the bar-magnet test were compatible with this  finding. Surveyor V also performed a rocket-erosion experiment on the Moon, firing its engines for 0.55 second to determine the effects of high-velocity exhaust gases impinging on  the  lunar  surface.

On October 15, 1967, after having been exposed  to  the  two-week  deep  freeze of the lunar night, Surveyor V responded immediately to the first turn-on command and operated until sunset of the second lunar day, October 4, 1967, during which   time it transmitted over 1,000 additional pictures. 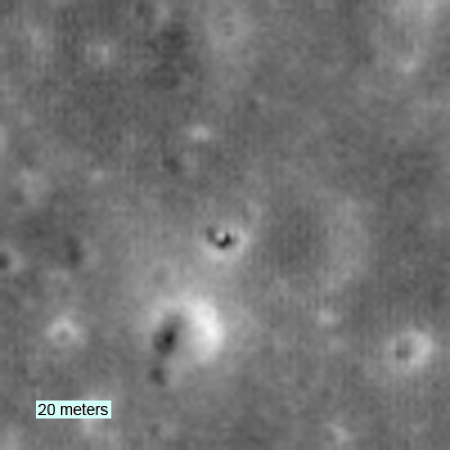