Surveyor VI landed in Sinus Medii, essentially in the center of the Moon's visible hemisphere, the last of four potential Apollo landing areas designated for investigation by the Surveyor program.

The performance of Surveyor VI on the lunar surface was virtually flawless. From touchdown until a few hours after sunset on November 24, 1967, the spacecraft transmitted 29,952 television pictures and the alpha scattering instrument acquired 30 hours of data on the chemical composition of the lunar material. On November 17, 1967, the vernier rocket engines of Surveyor VI were fired for 2.5 seconds and the spacecraft lifted off the lunar surface and translated laterally about 8 feet to a new location, the  first such  known excursion on the Moon. This “lunar hop” provided excellent views of the surface disturbances produced by the initial landing and furnished significant new information on the effects of firing rocket engines close to the lunar surface. The displacement provided a baseline for stereoscopic viewing and photogrammetric mapping of the surrounding terrain and surface features.

Other data provided by Surveyor VI included pictures of a bar magnet installed on a footpad to determine the concentration of magnetic material in the lunar surface; views of the stars, Earth, and the solar corona; lunar-surface temperatures up to 41  hours after  sunset; radar reflectivity data during landing; touchdown ­dynamics data during the initial landing and the lunar  hop which provided additional information on the mechanical properties of the lunar surface material; and on-surface doppler tracking data for refining existing information on the motions of the Moon.

On November 26, 1967, Surveyor VI was placed in hibernation for the two-week lunar night. Contact with the spacecraft was resumed for a short period on December 14, 1967. The successful completion of  the Surveyor VI mission not only satisfied all Surveyor obligations to Apollo,  but  completed the scientific investigation of four widely separated mare regions in the Moon's  equatorial  belt, spaced roughly uniformly across a longitude range be­tween 43° W and  23° E, from which important generalizations regarding the lunar maria have been derived. 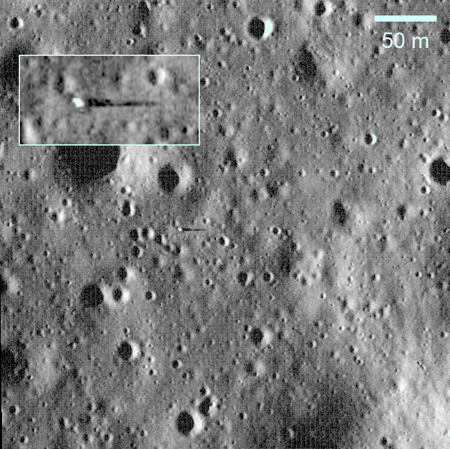