The objective of this project is to digitize and archive in a PDS-compliant fashion the imaging data from the Surveyor lunar landers. Currently, surviving copies of the data are stored on 70mm film in three Regional Planetary Imaging Facilities and at NSSDC. Data are practically inaccessible to planetary scientists and the public because they may not be checked out.

Within a remarkable 1.5-year period (May 1966 to January 1968), NASA’s Surveyor Program successfully landed no fewer than five spacecraft (Surveyor 1,3,5,6,7) on the surface of the Moon (Table 1). The Surveyor Program was primarily intended as safety and technology tests for Apollo, including assessment of soil mechanical properties and suitability for landing. However, these spacecraft also carried vidicon imaging systems with color filters (polarizing filters replaced the color filters on Surveyor VI and VII), which were used to document their surroundings; they returned over 87,000 images at resolutions of up to 1mm, increasing our understanding of the lunar surface. Other investigations included alpha-particle scattering detectors to characterize surface chemistry (on Surveyors V, VI and VII) and soil mechanics experiments (on Surveyors III and VII) to evaluate surface bearing, shear strength and cohesion, etc. The Surveyor imaging data documented for the first time surface conditions on the Moon and over time have provided invaluable information for lunar exploration on local lunar landing site properties, including soil particle size, density and strength, presence and distribution of pebbles, cobbles and boulders, characteristics of impact craters and their ejecta, local and regional slopes and their frequency and distribution (e.g., Jaffe et al., 1969, 1970; Shoemaker et al., 1969). In part because of the relatively few landing sites across the lunar near side, these image data and derived information are still being used to support lunar science and exploration (e.g., Wagner, 2006). The Surveyor Program imaging data therefore represent an invaluable lunar science and engineering resource that warrant restoration so that they are both preserved and made available for future generations of researchers.

This ‘data restoration’ proposal to the NASA LASER Program directly addresses that need.

Table 1. Locations and times of Surveyor missions (Jaffe and Steinbacher, 1969).

Surveyor II and IV were lost during a mid-course correction and a landing sequence respectively. Impressively, Surveyor I landed safely despite the absence of orbital imagery of the landing site. 1.1.2 Overview of Surveyor Program Imaging Data Several types of imaging sequences (Table 2) were performed by the Surveyor Cameras. Narrow and wide field settings supported completion of full panoramic Digitization and Public Archiving of the Surveyor Imaging Dataset 2 imaging sequences of the landing sites (e.g., Fig. 1). Images of some scenes at multiple phase angles over the lunar day allowed for photometric studies and detailed characterization of soil properties. The nature of lunar soil was uncertain prior to Surveyor (Gold, 1962), and the imaging and geophysical data collected during these missions helped to determine whether the lunar surface could sustain landing of spacecraft. The camera supported the other instruments by photographing the surface excavations and the site of the alpha-particle scattering detector. The Surveyor team devoted smaller numbers of images to observe the Earth, star-fields, and a solar eclipse. Table 2 is reproduced from Shoemaker et al. (1969) and lists numbers of images devoted to each of these categories for each of the missions.

Surveyors I, V and VII were reactivated and operated in a second lunar day (albeit after a lengthy warmup period) and Surveyor V lasted into a third lunar day. Surveyor VI is unusual in that the descent engines were fired during the landed mission allowing the spacecraft to ‘hop’ laterally 2.4m (potentially allowing stereo topography to be generated from the pre- and post-hop images). In total, Shoemaker et al. (1969) notes that 87,396 lunar images were acquired over all stages of the Surveyor Program. Images are denoted by mission number (sometimes lettered A-G) and by day of year and GMT time of acquisition. 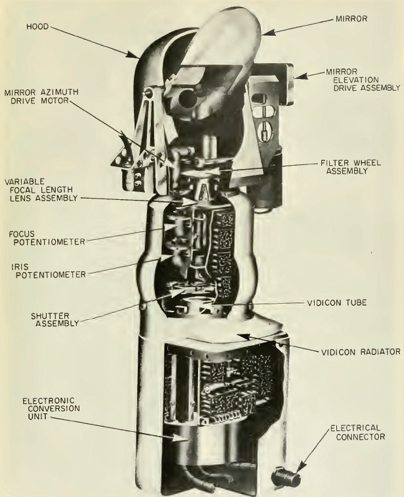 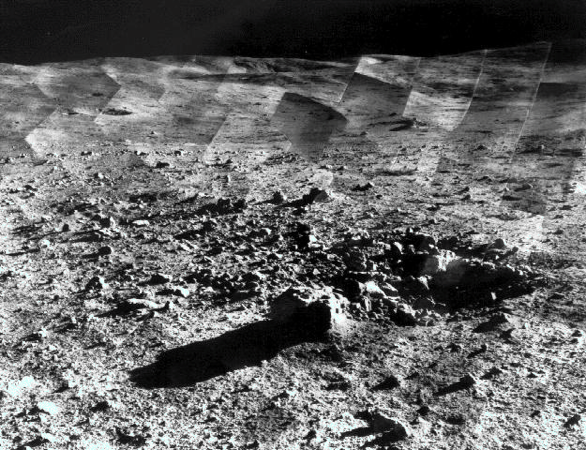 The cameras were designed (Fig. 1) to allow imaging in a wide range of illumination conditions. The focal length of the camera could be varied from 25 to 100mm, resulting in optical fields of view of about 25.3° to 6.43°; however, the camera was always operated at either the 25- or 100-mm focal length. An adjustable iris allowed the aperture to vary from f4 to f22 in response to varying scene brightness.  Images were acquired in either 200- or 600-line mode for transmission to Earth. Camera orientation was controlled by elevation and azimuth stops, which resulted in coverage from 65° below the camera horizontal to the horizon and over azimuths of 132° counterclockwise and 225° clockwise, i.e., only 3° of azimuth was unobservable although concerns about the camera mechanism sticking to the stops meant this full range was not utilized on every mission.