The planetary materials research group  is focused on understanding the chemical and physical origins of our solar system and ancient stars. Clues to such origins are stored in the atoms contained within meteorites and related planetary materials (e.g., interplanetary dust particles, as well as cometary, asteroidal, and lunar samples returned from space missions) which are the condensed matter leftover from the time that our solar system formed. We use high-resolution ion-, X-ray-, and electron-beam analytical techniques to extract detailed information on the chemical composition and structure of such samples to decipher the chemical and physical processes that occurred during and prior to the evolution of our solar system. We investigate naturally occuring components in meteorites (and related planetary samples) as well as synthetic analogs. Below are selected representative images from some recent work. Detailed information on this research can be found in the publications.

As the original building blocks of the solar system, presolar grains (also called as stardust) constitute remnants of stars that existed before the solar system and thus provide information on the materials from which our solar system formed. They are nanometer- to micrometer-size carbonaceous and oxygen-rich crystalline and/or amorphous condensates (including nanodiamonds, SiC, graphite, oxides, and silicates) that formed in the outflows of evolved stars and in the ejecta of stellar explosions (e.g., supernovae and novae), survived the formation of the Solar System, and can be found today in primitive unequilibrated extraterrestrial materials (e.g., meteorites, interplanetary dust particles and micrometeorites). They are identified in primitive extraterrestrial materials by their highly anomalous isotopic compositions in major (e.g., C, O) and minor elements compared to the average isotopic composition of Solar System materials.

The analysis of isotopic and chemical compositions and microstructure of individual presolar grains using ultrahigh-resolution ion mass spectrometry and electron microscopy techniques provide us with a snapshot of the thermodynamic conditions (e.g., pressure and temperature) and nuclear processes happening in their parent star at the time of their condensation, as well as galactic chemical evolution. Moreover, presolar grains were affected by both pre-accretionary and parent-body processing (e.g., aqueous alteration, thermal metamorphism) during their journey from their formation to the laboratory; they can thus provide constraints on the alteration processes acting in the early stages of Solar System history. 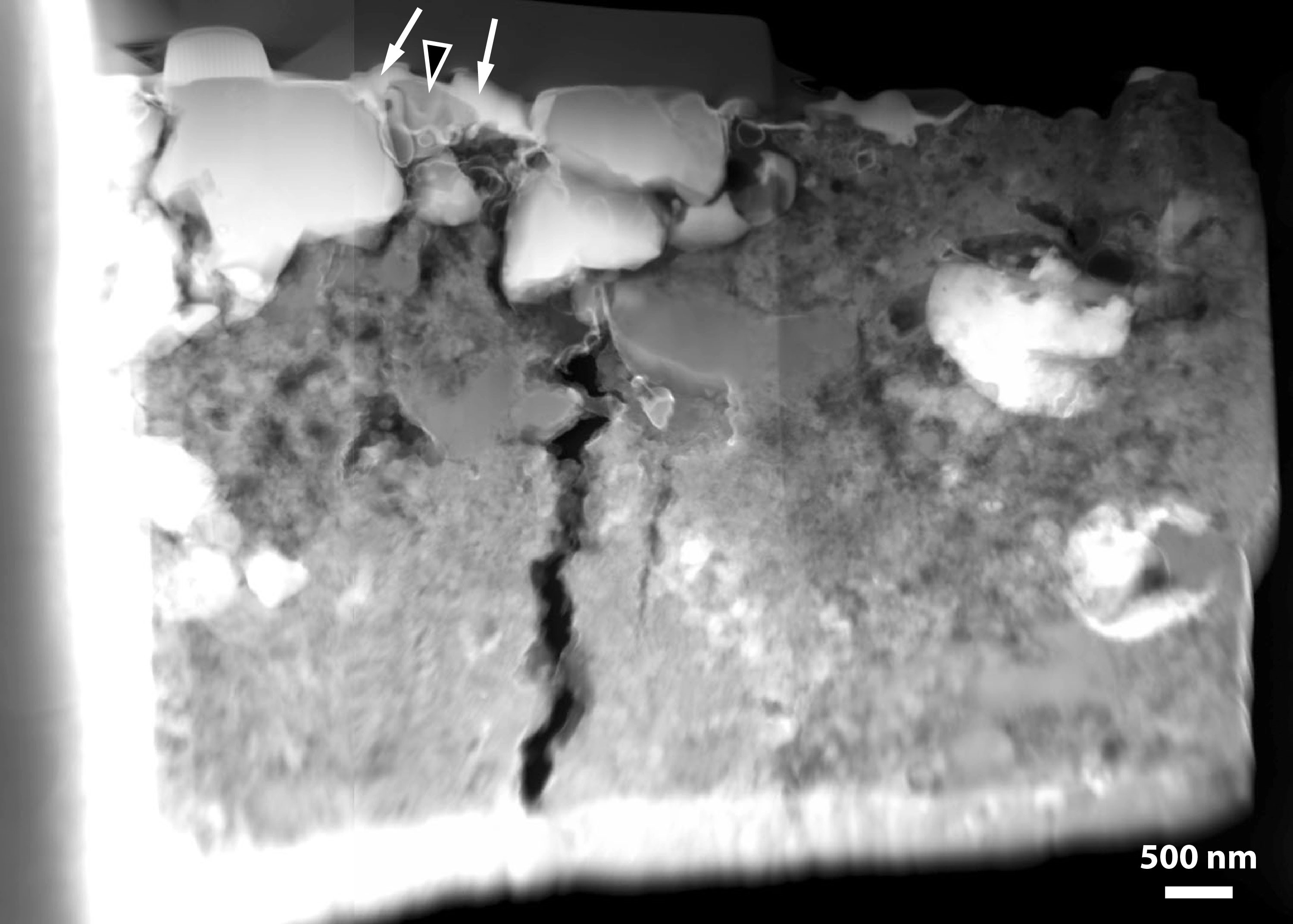 Presolar magnetite grain. In-situ search for presolar grains in the LaPaz Icefield 031117 CO3.0 chondrite led to the identification of a new presolar grain phase, magnetite (Fe3O4). The oxygen isotopic of the grain indicate an origin in the envelop of a low-mass red/asymptotic giant branch (RGB/AGB) star. From Zega et al. (2015), The Astrophysical Journal, 808, 55 (9pp). 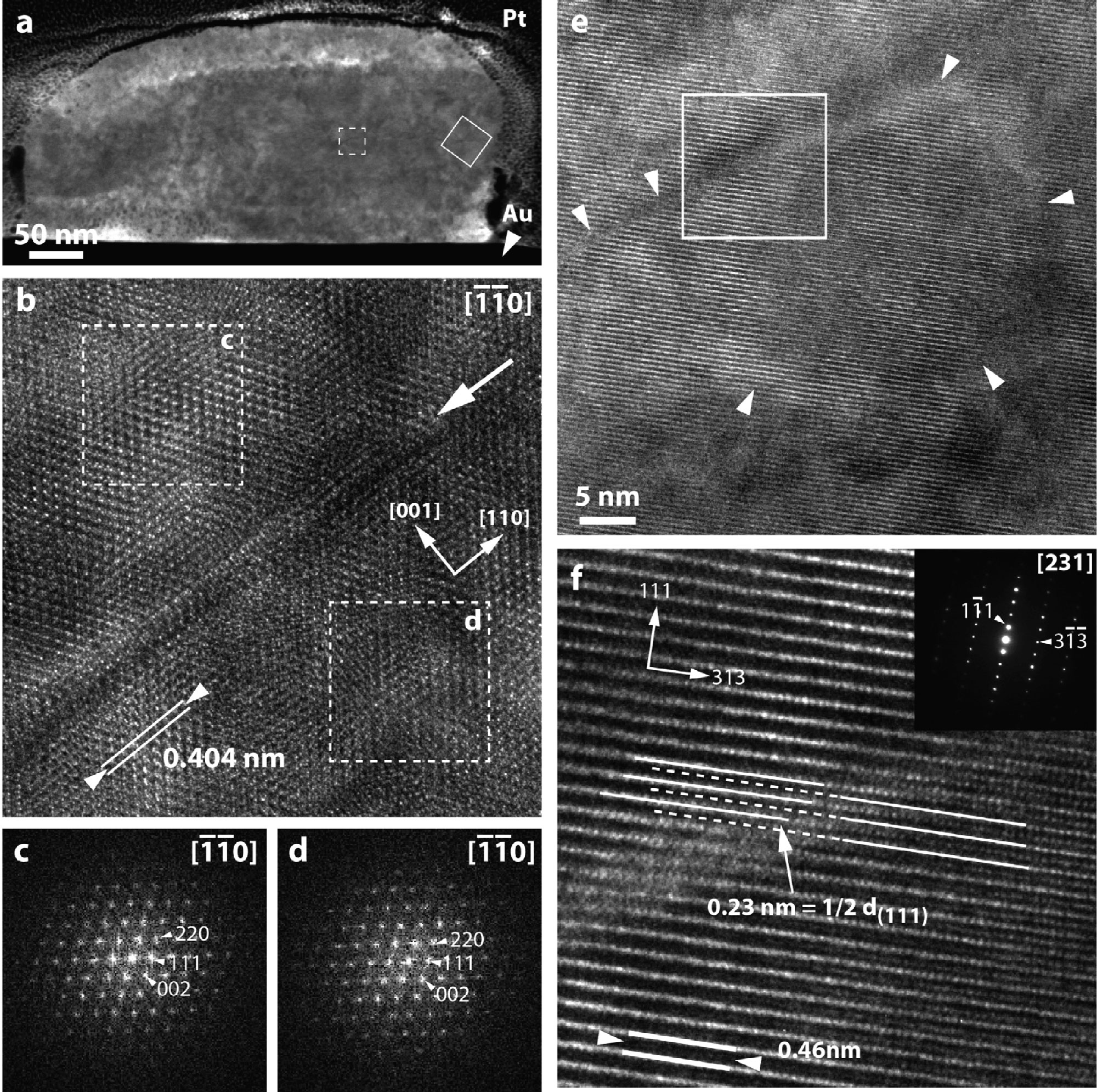 Atomic-scale structure of presolar spinel grains. Investigating the atomic-scale structure of a spinel (MgAl2O4) grain formed in the circumstellar shell around an Asymptotic Giant Branch (AGB) star that existed before the formation of our solar system. The grain (shown in cross section in panel 'a') formed by condensing in a gaseous environment around its host star more than 4.6 billion years ago. The images in panels 'b' through 'f' tell us about the atomic-scale order of the grain and can provide information on the conditions under which it formed. From Zega et al. (2014), Geochimica et Cosmochima Acta 124, 152-169. 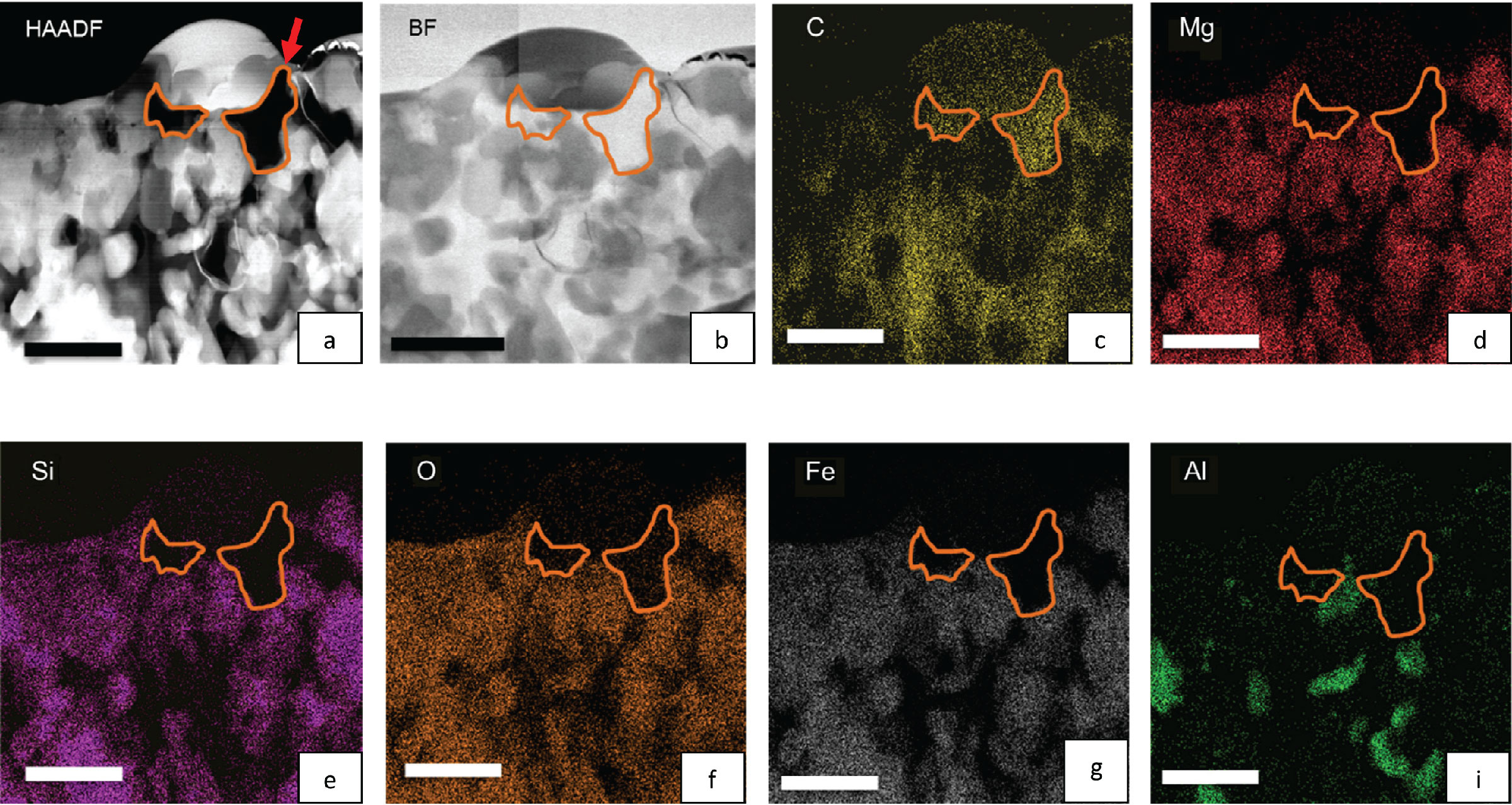 Investigating the chemistry of C-based compounds in primitive meteorites. Panels 'a' and 'b' are TEM images of a small region (scale bars measure 1000 nm) from a carbonaceous-type chondritic meteorite (QUE 97416). Its surface was previously measured using secondary ion mass spectrometry (SIMS), which indicated that the local area of interest shown here contains anomalies in the isotopes of C and H. Using TEM, we located the sub-surface distribution of carbon using X-ray mapping (compare panel 'c' with 'a' and 'b') as well as other elements (panels 'd' through 'i'). Combining these kinds of measurements with X-ray absorption spectroscopy provided information on the molecular chemistry of the C-based material. From Bose, Zega, and Williams (2014) Earth and Planetary Science Letters 399, 128-138.

We use microanalytical techniques to investigate the petrology, geochemistry, space weathering, and volatile history of the Moon using lunar samples returned by the Apollo and Luna Missions as well as lunar meteorites. We investigate the textures and mineralogy of samples using a combination of backscattered electron imaging and energy dispersive spectroscopy, which can be done using a scanning electron microscope or electron probe microanalyzer (EPMA). With EPMA we can also determine the stoichiometry of mineral phases and the chemistry of glasses within samples down to the micrometer scale. To determine the isotopic composition and abundances of volatile elements in lunar samples we utilize nanoscale secondary ion mass spectrometry (NanoSIMS). With this technique we have shown, for example, that water in the Moon shares as common heritage with water in the Earth’s interior and asteroids like Vesta (e.g., Barnes et al., 2014 Earth and Planetary Sciences 390, 244-252). 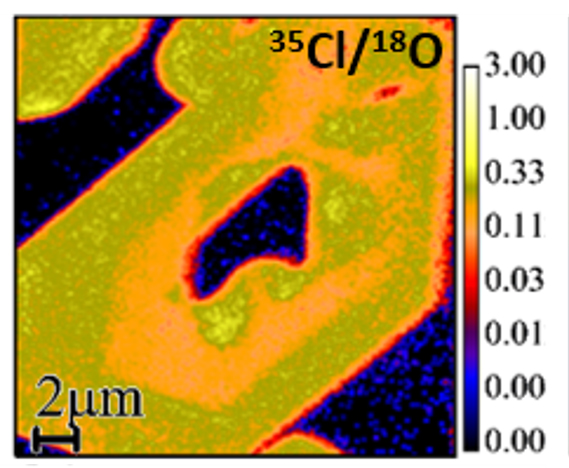 The isotope ratio image shows an apatite crystal (chemical formula: Ca5(PO4)3[F,Cl,OH]) in a sea of residual glass in an Apollo 12 basalt. The image shows that the apatite contains more chlorine (yellow) relative to the glass (dark blue), and that the distribution of chlorine within the apatite is heterogeneous at sub-micrometer scale. The 35Cl/18O isotope image was collected using a NanoSIMS 50L instrument.

Members of the group are also engaged in a project under the umbrella of Apollo Next-Generation Sample Analysis (ANGSA). The release of sample 71036 presents a unique opportunity to study volatiles in a basalt that has been frozen and specially preserved since its return, and to compare those results with basalts of similar bulk chemistries that have been stored at room temperature. This exceptional suite of basalts also offers a chance to unravel the history of volatile loss on the Moon, from the onset of mineral crystallization through vesicle formation, sampling, and subsequent curation. We are carrying out a detailed study of the major, minor, and volatile element chemistry (including H isotopes) of H-bearing minerals and melt inclusions in four Apollo 17 basalts, and will determine the U-Pb and Ar ages of the basalts.

OSIRIS-REx launched from Cape Canaveral, Florida, on an Atlas V 411 rocket on Sept. 8, 2016 at 7:05 pm EDT. OSIRIS-REx orbited the sun for a year, and then on Sept. 22, 2017, it used Earth’s gravitational field to change its trajectory to match that of Bennu’s. In August 2018, OSIRIS-REx’s approach to Bennu began. The spacecraft used an array of small rocket thrusters to match Bennu’s velocity and rendezvoused with the asteroid on Dec. 3, 2018.

After arrival, the spacecraft began a detailed survey of Bennu. The process lasted over a year, and included identifying and mapping potential sample collection sites. The final primary and backup sites were selected in December 2019 and, in October 2020, the spacecraft will briefly touch the surface of Bennu to retrieve a sample. The sampling arm will make contact with the surface of Bennu for about five seconds, during which it will release a burst of nitrogen gas. The procedure will cause rocks and surface material to be stirred up and captured in the sampler head. The spacecraft has enough nitrogen to allow three sampling attempts, to collect between 60 and 2000 grams (2–70 ounces).

In March 2021, the window for departure from the asteroid will open, and OSIRIS-REx will begin its return journey to Earth, arriving two and a half years later on Sept. 24, 2023. The sample return capsule will separate from the spacecraft and enter the Earth’s atmosphere. The capsule containing the sample will be collected at the Utah Test and Training Range. For two years after the sample return (from late 2023-2025) the science team will catalog the sample and conduct the analysis needed to meet the mission science goals. NASA will preserve at least 75% of the sample at NASA’s Johnson Space Flight Center in Houston for further research by scientists worldwide, including future generations of scientists. 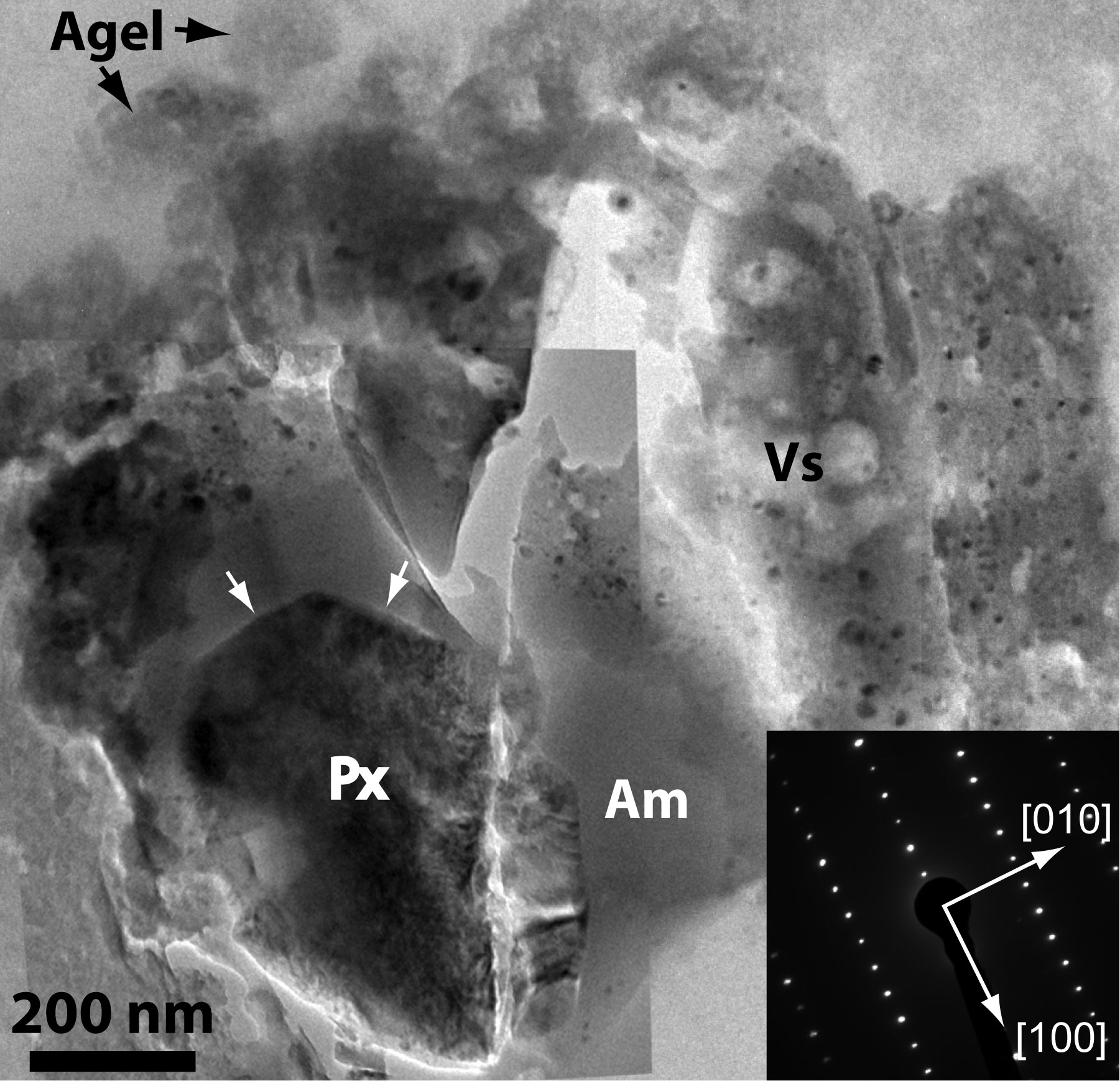 Shown above is a bright-field transmission electron microscope image of an ultrathin slice of the silicate material returned by the NASA Stardust Mission. A pyroxene grain (Px) occurs adjacent to amorphous material (Am) in one of the samples. The aerogel capture medium (Agel) occurs at the top of the image. A vesicular silica-rich glass (Vs) containing sulfides appears on the right side. The electron diffraction pattern (inset) comes from the pyroxene grain. Measurements such as these helped us understand the what Comet 81P is composed of and provided insight into how material was transported throughout the early solar system. For more information, see Leroux et al. (2008) in Tom Zega's publications. For moore information on Comet 81P/Wild 2, see Zolensky et al. (2006; 2008) and Brownlee et al. (2006) in the publication list. 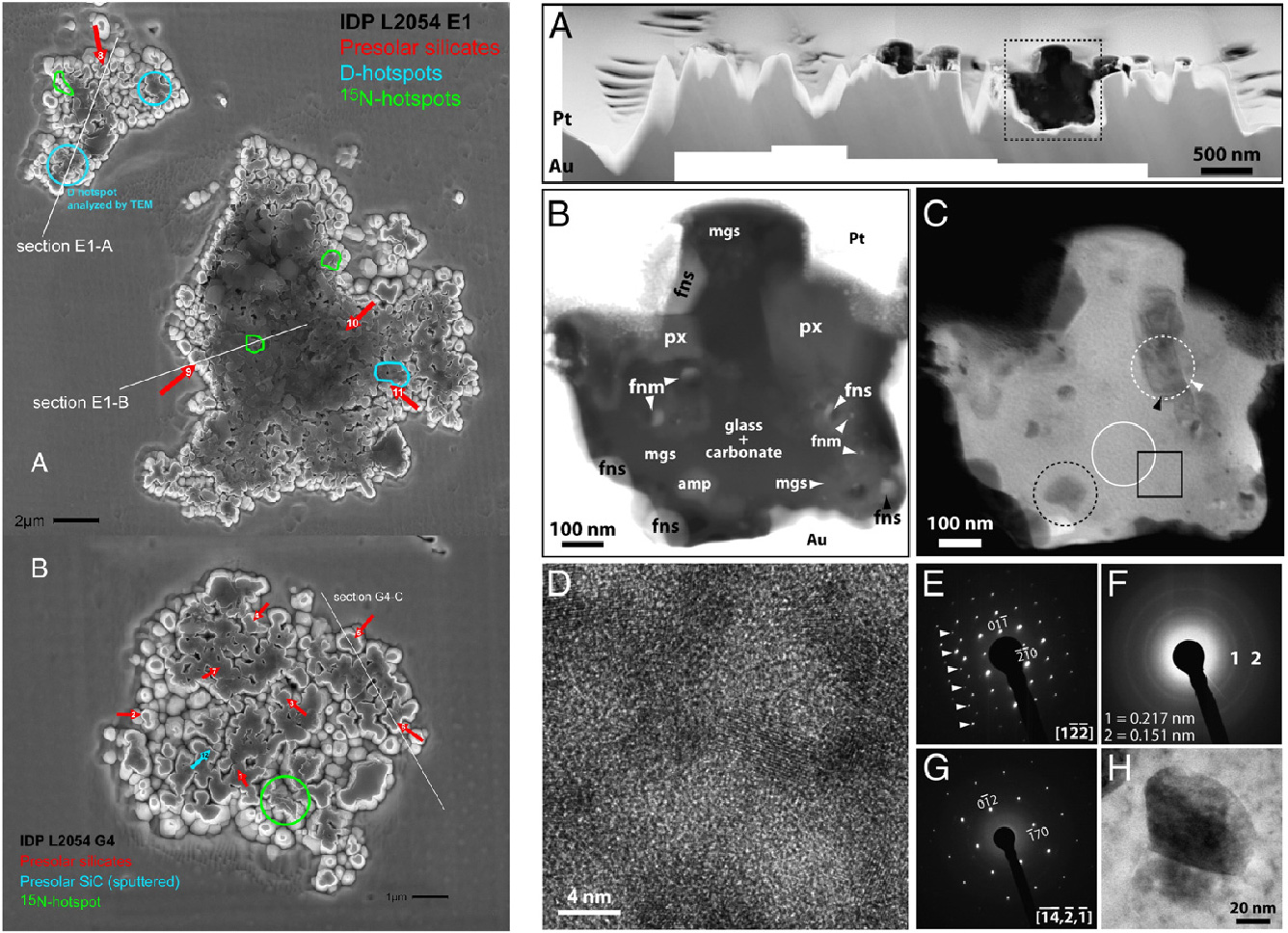 Analysis of the nanoscale structure of an interplanetary dust particle (IDP) from Comet 26P/Grigg-Skjellerup.

The left figure contains secondary electron images of images of two IDPs labeled ‘E1-A’ and ‘G4-B’. The IDPs were analyzed for their isotopic composition using secondary ion mass spectrometry. Some of the isotopically anomalous areas were extracted for detailed analysis using transmission electron microscopy (TEM) and are indicated by the white lines. One such region from the deuterium(D)-rich part of the IDP is revealed by TEM in the right figure. Panel (A) shows the overall section with the IDP sandwiched between Pt and Au (used for sample preparation). Panel (B) shows an image of the D hotspot visible in the left figure and reveals the fine-grained character of this aggregate material. Silicate materials occur together with metal, sulfides, and carbonates. Understanding these details help us piece together the origins of these IDPs and the comets in which they occur. Information on the other parts of both figures and details on this study can be found in Busemann et al. (2009) Earth and Planetary Science Letters 288, 44-57.

In order to study the complex phase assemblages in meteorites and related planetary materials we also develop new analytical methodologies using a variety of techniques.

Carbonaceous chondrites are heterogeneous in terms of composition, density, and grain size from the micro to nanoscale. To better constrain the nature of these fine-grained materials, a new method coupling phase mapping in low-voltage SEM-EDS and quantification by electron microprobe can be used. The aim is to quantify simultaneously the composition and the abundance of sub-micrometer phases, determine the geometry of the grains, and obtain the global composition of the area analyzed at higher spatial resolution.

Fig 1. Left Graphical representation of the Mg and Si element maps combined with the intensity of Fe (colorbar). Each point corresponds to a pixel. Identical composition form clusters of pixels. Right Phase map of the matrix of the Paris meteorite. The pixel size is 250 nm.

At 6 keV in the SEM, a minimum spatial resolution of 250 nm is attained. The element maps obtained by EDS are analyzed by clustering (Fig. 1 right) to generate a phase map (Fig. 1, left). For pixels still showing a contribution of different phases, a linear combination fit (MLLS fitting) is performed to retrieve the mixing ratio of the different phases (Fig. 2). Once the phases are identified, the chemical compositions of the largest grains are obtained using the electron microprobe (point analyses). Then the global composition is calculated from the modal abundances, the density, and the composition of each phase.

Fig 2. Left Multiple reference spectra fitted to raw data. Each spectrum is adjusted using a coefficient. Right Map of the chrysotile coefficient. The colorbar indicate the proportion of this phase in each pixel.