History of the Space Imagery Center 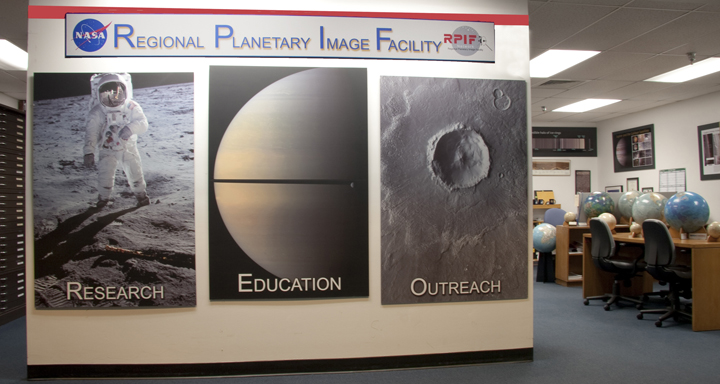 A Brief History of the Space Imagery Center

At the end of the Apollo and Mariner 10 programs (about 1974), it became apparent that the quantity of imaging data we acquired by LPL participation in NASA missions was so great that it was no longer accessible for research purposes under the then present storage conditions.

Conversations with Dr. Charles P. Sonett, then Director of Lunar and Planetary Laboratory, led to the conclusion that it was both feasible and desirable to set aside an area in this building to store and make accessible the lunar and planetary images we currently possessed and would acquire in the future.

Initially, NASA agreed to provide the salary for a full-time librarian to oversee the daily operation of the Center. These funds were provided by NASA from April 1976 to July 1979. The initial NASA funding was through a separate grant with Professor Robert Strom acting as principal investigator. Subsequent NASA funding was provided through a NASA Planetary Geology grant.

When the Space Imagery Center was officially opened in July 1977, Dwornik was so impressed that he decided other facilities should be established at strategic locations throughout the country. He negotiated with Tom Young, then head of the Office of Space Science at NASA, to fund six other regional centers. NASA then formed a committee, the Regional Planetary Image Facilities Advisory Group, to advise NASA on the operation and equipment needs of the Centers and to coordinate their activities. This committee consists of the directors of each facility and the head of the NASA Planetary Geology and Geophysics program.

At the first meeting of this group (May 30, 1978), the responsibilities of NASA and the Institutions were established in the form of a memorandum of agreement. Part of the host institution’s responsibility was to provide at least 1000 square feet of space and funding for a full-time librarian. Therefore, at this time it became necessary to acquire other funds to support the librarian’s position. This was subsequently accomplished by negotiations with the university administration that led to establishing a new state-funded position to oversee the daily operations of the SIC.

At the present time there are 9 domestic and 8 foreign RPIFs. The RPIFs serve a number of functions: 1) they are repositories for lunar and planetary images, the products derived from these images, and the ancillary engineering data required to analyze the images, 2) they serve as research facilities for researchers who use imaging data and products in their research, 3) they are open to the public for tours and for assistance in ordering images, 4) they assist the media with information and pictures to accompany news and magazine articles and books, and 5) they serve an educational function by conducting tours for school children, providing materials for teaching at the elementary, middle and high school level, providing research projects for high school and university students, and providing teaching materials for university classes.

The benefits of the Space Imagery Center to LPL and the University are (1) it serves as an attraction to potential students interested in planetary surfaces, rings or atmospheric dynamics, (2) it fosters recognition of LPL and the University of Arizona by providing services to Arizona residents, the media and U.S. and foreign principal investigators, and (3) it is a valuable teaching tool used by many faculty members across the university. The Space Imagery Center is an indispensable tool for our research programs in planetary geology and geophysics. In this regard it is a research laboratory in every sense of the word, and just as important to these research programs as the spectroscopy and geochemistry labs are to other programs.