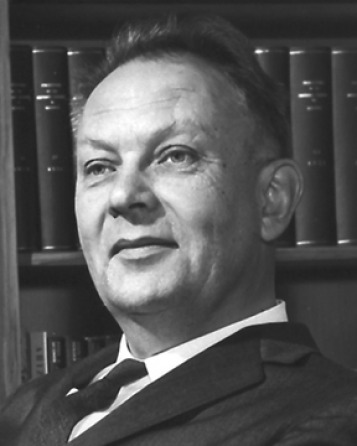 Gerard P. Kuiper (1905-1973) is considered by many as the father of modern planetary science. Kuiper was born in The Netherlands. He entered Leiden University in 1924 and received his Bachelor of Science in 1927 and a Ph.D. in Astronomy in 1933. While completing his advanced studies, he worked as an assistant observer at the Leiden Observatory (1928-1933). From 1933-1935, he was a Kellogg Fellow under American astronomer Robert Grant Aiken at Lick Observatory. In 1935, Kuiper visited Harvard College Observatory as lecturer in Astronomy. He accepted a job at Yerkes Observatory (University of Chicago) in 1936 and was named Director of the Yerkes and McDonald Observatories in 1947. He studied the atmosphere of Saturn’s moon Titan in 1944, the carbon dioxide atmosphere of Mars in 1948, Uranus’s satellite Miranda in 1948, and Neptune’s satellite Nereid in 1949.

In 1955, Gerard P. Kuiper posted a notice on the message board at the International Astronomical Union conference in Dublin; he was looking for assistance in creating a lunar atlas. The only person to reply to his inquiry was Ewen Whitaker. This was the beginning of a long, successful collaboration that ultimately produced four lunar atlases (see details below) and led the duo to work on NASA’s Ranger and Apollo missions. The work on the atlases was begun at Yerkes Observatory in the 1950s. In 1960, Kuiper resigned from Yerkes Observatory and moved to Tucson and founded the Lunar and Planetary Laboratory (LPL), where he and Whitaker continued their work.

In the 1960s, Kuiper served as Principal Investigator for the NASA Ranger program and as an experimenter on the NASA Surveyor program. He helped identify landing sites on the Moon for the Apollo program. Kuiper established a group of telescopes in the Santa Catalina Mountains above Tucson; made balloon spectroscopic observations of the Earth’s atmosphere; and conducted observatory site surveys in Hawaii, Mexico, and California. Kuiper served on numerous NASA committees and panels and briefed high government officials on features of the space program. Kuiper discovered several binary stars which received "Kuiper numbers" to identify them, such as KUI 79. Besides the minor planet 1776 Kuiper, three craters (Mercurian, lunar and Martian), Kuiper Scarp in Antarctica, and the now-decommissioned Kuiper Airborne Observatory was also named after him. Astronomers refer to a region of minor planets beyond Neptune as the "Kuiper belt" because Kuiper had suggested that such small planets or comets may have formed there. The Kuiper Prize, named in his honor, is the most distinguished award given by the American Astronomical Society's Division for Planetary Sciences, an international society of professional planetary scientists. The prize recognizes outstanding contributors to planetary science, and is awarded annually to scientists whose lifetime achievements have most advanced our understanding of planetary systems. Winners of this award include Carl Sagan, James Van Allen, and Eugene Shoemaker.

Audio recordings of and about Gerard P. Kuiper

PHOTOGRAPHIC LUNAR ATLAS / D. W. G. Arthur, E. Moore, J. W. Tapscott, and E. A. Whitaker ; Edited by G. P. Kuiper. – Chicago : University of Chicago Press, 1960. This atlas was the first of four atlases produced by Kuiper. The Photographic Lunar Atlas was compiled from the best existing telescopic images taken by five observatories: Mount Wilson (California), Yerkes (Wisconsin), Lick (California), McDonald (Texas), and Pic du Midi (France). The images show the same area in different illuminations to highlight various details. The Photographic Lunar Atlas was arranged so it could easily be used at the telescope. The images are oriented so that the Moon’s south pole is at the top, which is how observer’s see it while looking through a telescope. The atlas was printed on paper that allowed observers to write notes directly on the image while they were at the telescope.

ORTHOGRAPHIC ATLAS OF THE MOON : SUPPLEMENT NO. 1 TO THE PHOTOGRAPHIC LUNAR ATLAS / D. W. G. Arthur and E. A. Whitaker ; Edited by G. P. Kuiper. – Tucson : University of Arizona Press, 1960. This atlas was based on the images contained in the Photographic Lunar Atlas with the addition of a coordinate system defined by ~5,000 position points.

RECTIFIED LUNAR ATLAS : SUPPLEMENT NO. 2 TO THE PHOTOGRAPHIC LUNAR ATLAS / E. A Whitaker, G. P. Kuiper, W. K. Hartmann, and L. H. Spradley. – Tucson : University of Arizona Press, 1963. The Rectified Lunar Atlas was created from the negatives that were used to make the Photographic Lunar Atlas, with additional images from the Yerkes and McDonald observatories. Positive transparencies were made from the negatives and then projected onto a three-foot diameter white globe. The projected image was photographed to make the images for the RLA. This technique was employed in order remove the effects of foreshortening (distortion) on the lunar limb. The images are oriented so that north is at the top.

CONSOLIDATED LUNAR ATLAS : SUPPLEMENT NO. 3 and 4 to the PHOTOGRAPHIC LUNAR ATLAS / G. P. Kuiper, E. A. Whitaker, R. G. Strom, J. W. Fountain, and S. M. Larson. – Tucson : University of Arizona Press, 1967. The Consolidated Lunar Atlas is divided into two sections. Part one includes images taken under low-oblique lighting, which brings out features such as low domes, lava beds, and other objects of low vertical relief. Part two includes full-moon photography, which presents photometric information unavailable from even higher resolution images. The CLA images were taken at two facilities: the 61-inch NASA Telescope at Catalina Observatory on Mt. Bigelow, and the 61-inch U.S. Naval Observatory telescope in Flagstaff. Kuiper personally chose Mt. Bigelow as the site for construction of the 61-inch NASA Telescope, preferring Mt. Bigelow rather than Kitt Peak because it was higher in elevation and more easily accessible from the UA campus via the Catalina Highway. The 61-inch NASA Telescope, now named the Kuiper Telescope, was completed in 1965.