LPL at a Glance 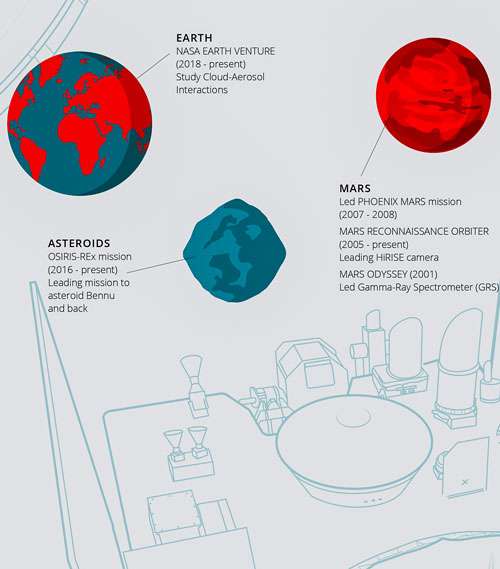 LPL hosts the Kuiper Materials Imaging and Characterization Facility, which provides instrumentation that combines 2D- and 3D-analysis of composition and structure from cm to atomic length scales.

LPL’s SPACEWATCH® was the first program to discover an asteroid using electronic detection, and LPL’s Catalina Sky Survey (CSS) has discovered most of the near-Earth asteroids found since 2005; combined, they have discovered approximately half of the known near-Earth asteroids. Again for 2021, CSS was responsible for finding nearly half of all objects located that year.

The Department of Planetary Sciences was established in 1973, thirteen years after the founding of LPL. Our alumni are active in a variety of disciplines and professions around the world.

Our students excel at independent research

Our students work with planetary missions and instruments led and designed at LPL, such as the HiRISE camera, the OSIRIS-REx mission, and the Transmission Electron Microscope.

The faculty, staff, and students at LPL take every opportunity to share research and development with the community and to participate in community events whenever possible (evening lecture series, public talks, science fairs, hands-on science open-houses, etc.).