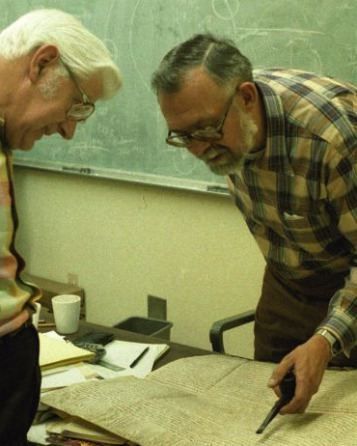 SILL, Godfrey T., age 76 died peacefully at home December 18, 2007. Teacher, planetary scientist, winegrower, husband, uncle, amateur astronomer, private pilot, vintner, builder of fun things. Born in Cleveland, he grew up in Leonia, New Jersey. With B.A. from St. Bonaventure and M.S. from Norte Dame he taught high school for ten years in Illinois. In 1965 he moved to Tucson, completed a Ph.D. at University of Arizona and conducted research on the atmospheres of planets at the UA's Lunar and Planetary Laboratory from 1965 to 1988. Discovered that the high clouds on planet Venus are made of sulfuric acid. In 1984 he started an experimental wine grape vineyard in Elgin, Arizona, which became his retirement project for 20 years. Always a teacher, he introduced hundreds of students, nephews and nieces, friends and neighbors, and even strangers to the wonders of the heavens: constellations, planets, star clusters, galaxies, sun spots, meteors, comets and satellites. He is survived by his wife, Laurel Wilkening, sisters Marjorie de Giovanni and Virginia Douglas, brothers Richard, Don, Bill and Hank Sill and numerous nieces and nephews.