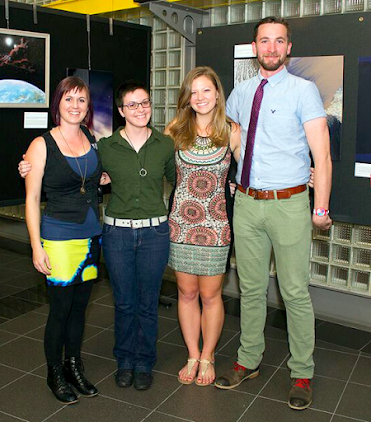 This was absolutely our best year yet! We feel that we've really come into our own as an event, and the community has shown us so much love and enthusiasm. This year we displayed nearly 250 pieces of art from 120 artists. It is the creative efforts of you artists that make this show possible- thank you all so much for making it such a wonderful weekend, and for sharing your art with the community. We'd also like to thank the art students who ran interactive art projects throughout the weekend. They added a level of depth to our ability to engage with the public. We're already looking forward to next year! 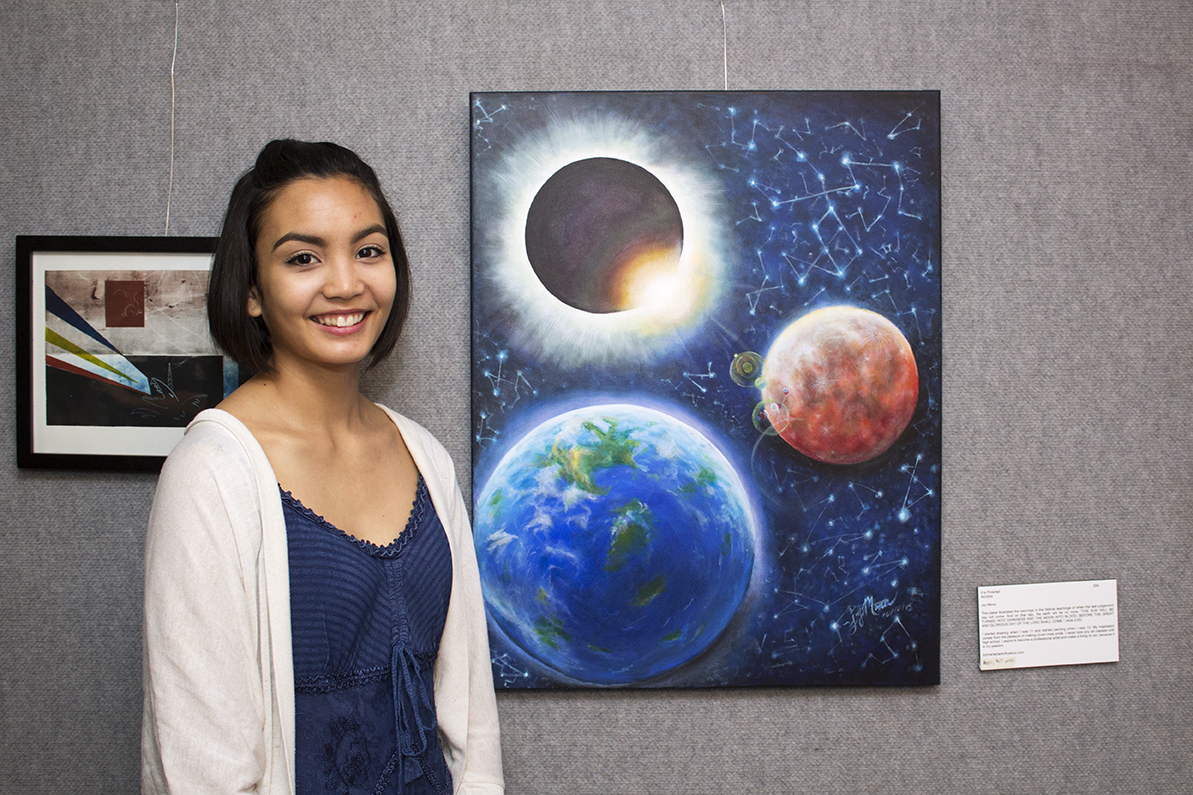 The students in this class organized “art interventions,” interactive and collaborative art projects that show attendees could participate in during the exhibition. One group interviewed attendees about what inspired them about art and science, and is creating a video about the art show. Another group had paper tiles to color, which when put together created colorful mosaics depicting visual representations of scientific equations. A third group built a chalkboard which simply had a fill in the blank statement: “When I look at the sky, ...” These (very popular) projects brought a new level of engagement to the art show by allowing attendees to also become artists. 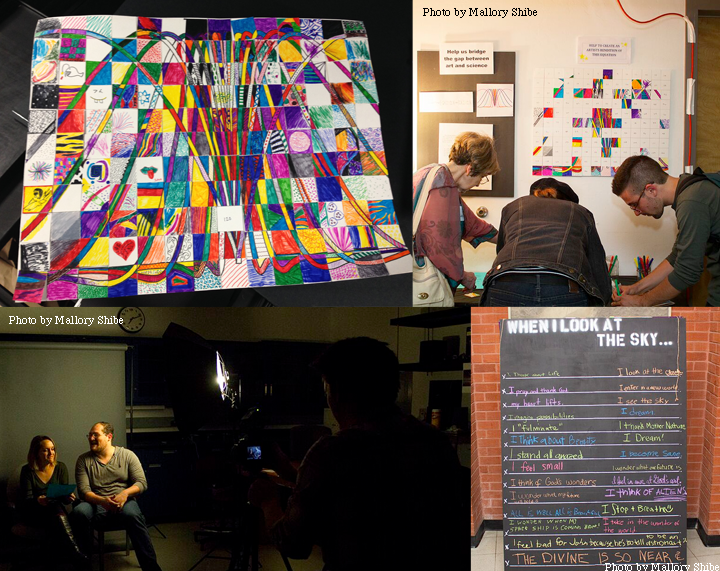 Congratulations to the 2015 winners!

Microburst during the monsoon in Arizona on Kitt Peak, west of Tucson. The Mayall 4m dome and other telescopes operated by the National Optical Astronomy Observatory will remain closed this night, faced by the ferocity of the weather.

Gautham Narayan is a postdoctoral scientist at the National Optical Astronomy Observatory and the University of Arizona and works on dark energy, supernovae, white dwarfs, and cares about science education & outreach, photography and nature.

Stress, on the rocks.

This book is a copy of my (recently defended) PhD thesis. My research focuses on the weathering rocks on the Moon due to the daily heating and cooling of its surface. Each day, thermal stresses form that can, over time, break down rocks into dust. Carved into the book is a cratered landscape created from lunar topography data, a landscape continuously modified by this thermal weathering process. [The wooden box in this piece was handcrafted by Ricki Weaver, from RickisWoodWorks on Etsy.]

Jamie Molaro recently defended her PhD in Planetary Science in this department. Her research focuses on surface processes on Earth, the Moon, and other solar system bodies. She founded The Art of Planetary Science exhibition three years ago, and loves to run the event along with other graduate students who are passionate about cultivating science literacy and appreciation in our society. 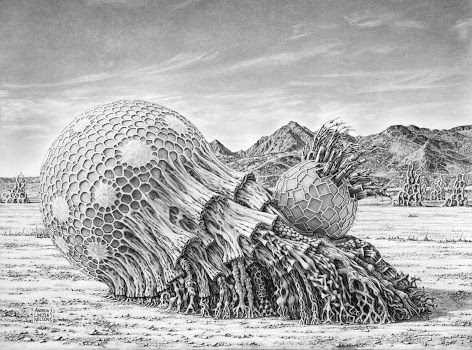 “Plantimal 2” is one of the most visually direct images in the “Living Machine” series. This work explores themes of mimetic evolution, Lamarckian evolution and self- construction. The creature in this drawing has both plant-like and animal-like components. This “plantimal” might be in the process of taking on the form of a smaller more machine-like creature which it is carrying.

Andrew Lincoln Nelson is an emerging artist working in Tucson, Arizona. His work includes graphite drawings of creature-like machines. His Living Machines series depicts life as it might be on other worlds (exobiology) or on an Earth of the distant future. The series explores post technological scenarios in which a fusion between which organic life and feral technology has occurred. 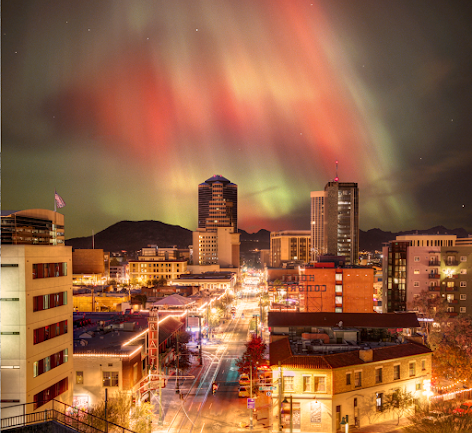 This series envisions what we may witness during a magnetic field polarity flip. The Earth currently possesses only one set of magnetic poles that drift aimlessly around the geographic North and South poles. During a polarity flip, multiple sets of poles may appear spontaneously resulting in the “northern lights” becoming a regular phenomenon at any latitude, from Miami to Machu Picchu.

Patrick Cobb is a mostly self-taught landscape photographer. The series, Geomagnetic Reversal, combines two of his favorite subjects, southwestern landscapes and the northern lights. He currently works as a solar installer, trying to help ween this country off of its fossil fuel addiction before its too late.

Matthew is inspired by the eternal beauty of the heavens and is fluent in both traditional and digital art. Currently in Tucson he continues to work full-time as a painter/illustrator and graphic artist and recently had his work published in The Art of Space by Ron Miller. “I feel very blessed to be a self-taught artist and I’m continually inspired by the wonders and mysteries of God.”

As two planets orbit their star, the line connecting them draws out intricate geometrical patterns, some akin to lotus flowers, others to wormholes. The left pattern is Venus and Earth, which are in a near 8:13 resonance. In center is 55 Cancri b and c, two exoplanets 40-ly away close to a 1:3 resonance. The right pattern is Kepler 11, 2000-ly away, with exoplanets c and e in a near 2:5 resonance.

Joshua Lothringer is a second-year graduate student at the Lunar and Planetary Laboratory studying the atmospheres of super-Earth and sub-Neptune exoplanets through transit spectroscopy using optical and infrared observations from Hubble Space Telescope. He thinks exoplanets are awesome. 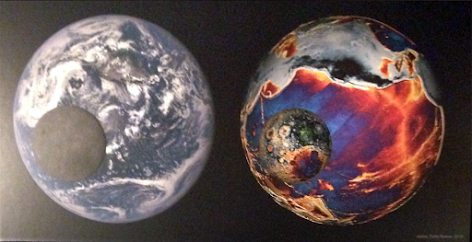 The Moon, in Gravity

Measurements of a planet's gravity field provide clues to the interior structure of a planet. These graphics illustrate some of the beauty within the gravity field of the Moon, as measured by the Gravity Recovery and Interior Laboratory (GRAIL) mission.

James Keane is a 5th year PhD candidate at the University of Arizona, Lunar and Planetary Laboratory. He studies the interplay between orbital/rotational dynamics and planetary geology of terrestrial and icy satellites (with an emphasis on the Moon). In his spare time, he enjoys drawing, painting, and graphic design. 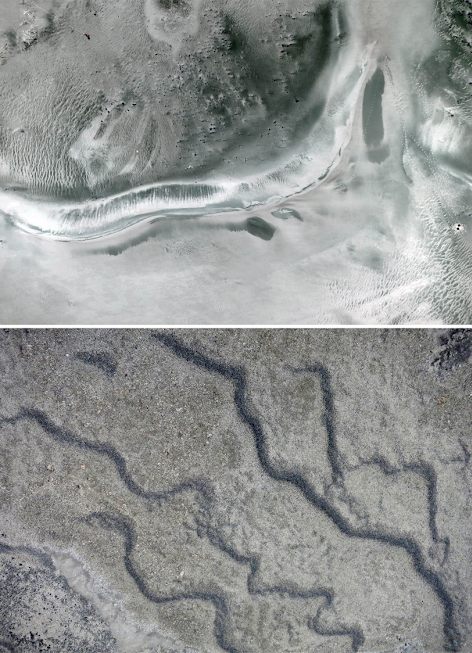 By subduing and stretching reflected light, a desolate desert appears as a dark, turbulent sea of sand. On a wet day in its future, would rain wash away Mars' red dust from the planet's black sands? At Great Sand Dunes, one ponders how rivers and dunes entangle each other, pushed and shoved around by the same elements that shaped the red planet.

I gain a unique view of our planet using a camera mounted on a kite. The photographs are collected with specialized equipment and are processed by computer to create data for research. The images often invoke the unfamiliar, reminiscent of other worlds, some unreal. Here I explore a space with arbitrary color, scale and perspective to ponder the strangeness of our own planet.

Special thanks to our sponsors!

And thank you to:

Lisa Hochtritt & the students of ARE 420

Michelle Thompson, Hamish Hay, Josh Lothringer, and the students of ARE 420

Thanks to all of our 2015 participants!