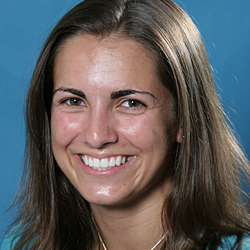 Sarah M. Hörst, doctoral student in the Department of Planetary Sciences, is the recipient of the 2011 Kuiper Memorial Award. The award is presented annually to University of Arizona students in the field of planetary sciences who have excelled in academic work and research. The award is presented in memory of Gerard P. Kuiper, the founder of the Lunar and Planetary Laboratory and Department of Planetary Sciences.

Hörst enrolled in the Department of Planetary Sciences in 2005 after earning Bachelor of Science degrees in planetary science and literature from the California Institute of Technology. Her research at the University of Arizona has focused on the role of oxygen chemistry in Titan's atmosphere and its relationship to the formation of aerosols, commonly called tholins. In a widely cited paper (Hörst et al., JGR), Ms. Hörst showed that the CO and CO2 in Titan's atmosphere is likely the consequence of precipitation of energetic oxygen ions from Saturn's magnetosphere into Titan's upper atmosphere. This paper clarified several decades of confusion about the origin and distribution of O-bearing species on Titan. It received broad support in the community and was recently awarded the Peter B. Wagner award from the Desert Research Institute. This award is given to paper by a female author in atmospheric science.

More recently, Ms. Hörst has concentrated her work on analysis of Titan aerosol analogues created in laboratory simulations using high-resolution mass spectroscopy. She has identified many hundreds of oxygen species in the tholins, including nucleotide bases and amino acids. This work has attracted a great deal of interest in the wider community (Discover magazine cited it among its top stories of 2010). Ms. Hörst has also identified and explained some surprising regularities in the tholin mass spectra, leading to deeper understanding of chemical growth in Titan's atmosphere. In particular, she has been able to explain the 13.5 amu periodicity seen in all tholin spectra as a consequence of molecular growth by addition of CH3 and N radicals to large molecules at equal but random rates, moderated by some basic chemical rules.

Ms. Hörst's dissertation work, titled "Post-Cassini Investigations of Titan Atmospheric Chemistry," required that she develop an original approach rather than apply well established techniques to new environments or extending previously used methods. This new approach allowed her to identify molecules uniquely, searching through the many thousands of molecules detected and assigned to find regular patterns in order to interpret these patterns in terms of chemical structure. Ms. Hörst successfully defended her dissertation on April 28, 2011.

Hörst received a cash award and a plaque, presented at the LPL Awards and Recognition Ceremony on April 22, 2011. Congratulations, Sarah!