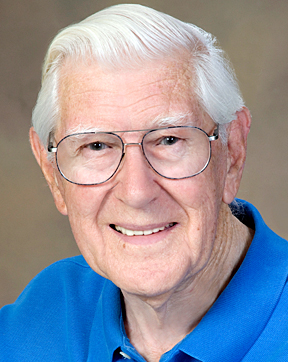 LPL is pleased to announce that Ewen A. Whitaker will be honored with an honorary doctorate of science from the University of Arizona at the May 2011 commencement.

Mr. Ewen Adair Whitaker was born on June 22, 1922, in London. In 1940, he began work as a laboratory assistant with Siemens Brothers. He was later exempted from military service because his work at Siemens was itself vitally important to the war effort—Ewen worked on the top-secret PLUTO project, conducting spectrochemical analysis of underwater gasoline supply pipes to be used for the D-Day Normandy landings.

In 1949, Mr. Whitaker became Astronomer at the Royal Observatory, Greenwich, and then, in 1956, at Herstmonceux Castle. Astrometry and astrophysics were his vocation, but selenography, the study of the surface and physical features of the Moon, became the avocation that would lead him to Tucson and to the Apollo program. In 1955, at the Ninth Congress of the International Astronomical Union, the eminent planetary astronomer Gerard P. Kuiper issued a memorandum emphasizing the need for a high-quality, accurate lunar atlas and soliciting interest in a lunar atlas project. Ewen Whitaker was the only person to respond. This resulted in Kuiper offering the young scientist a job on the "Lunar Project" headquartered with Kuiper at the University of Chicago/Yerkes Observatory. Whitaker spent two years at Yerkes (1958-1960) before moving to Tucson, where Kuiper founded the Lunar and Planetary Laboratory (LPL) at the University of Arizona in 1960. Within a year, President Kennedy committed the United States to landing a man on the Moon; the "Lunar Project" (and the scope of Whitaker's work) quickly became a matter of national interest and concern.

Ewen Whitaker's research was fundamental to the success of the manned lunar program. He pioneered the technique of groundbased differential UV/Infrared lunar photography, resulting in the first compositional maps of lava flows on the Moon. These maps, scientifically important in their own right, were also instrumental to the selection of landing sites for the Surveyor and Apollo missions. In 1961, he was tasked with selecting impact sites for Rangers 6 and 7. He later located the landed positions of four Surveyors; the Surveyor 3 site was eventually chosen as the Apollo 12 landing site. He also selected sites for Lunar Orbiter 5. Whitaker briefed astronauts for Apollo missions 13, 15, and 16. He analyzed Apollo images and located the impact craters formed by the Ranger 7 and 9 spacecraft and the Apollo 13 and 14 SIVB modules. Knowing the masses, impact velocities, and impact angles of these craters meant that equations for impact mechanics could be tested and refined. In between missions, Mr. Whitaker continued Kuiper's lunar atlas project, which included supplements produced and printed in Tucson: the Orthographic Atlas of the Moon (1960), the Rectified Lunar Atlas (1961), and the Consolidated Lunar Atlas (1967), consisting of extremely high-quality photos obtained with the 61-inch reflector telescope on Mt. Bigelow.

Mr. Whitaker's other achievements include the discovery and approximate determination of the orbital eccentricity/inclination of the Uranian satellite Miranda (made possible by a method he devised), nomenclature of 60 previously unnamed lunar craters, nomenclature of 14 far-side craters to commemorate the Challenger and Columbia astronauts, determination of dates on which Galileo made his drawings of the Moon and composed the various relevant sections of Sidereus Nuncius, and the invention of a system for naming craters on the Moon's far side. Not least among Ewen Whitaker's accomplishments is his role in the development of LPL as a world-class leader in planetary studies. Ewen Whitaker retired from LPL and the University of Arizona in 1987 after a long career spent in service to science and to mankind.

Congratulations, Ewen, from your friends at LPL!