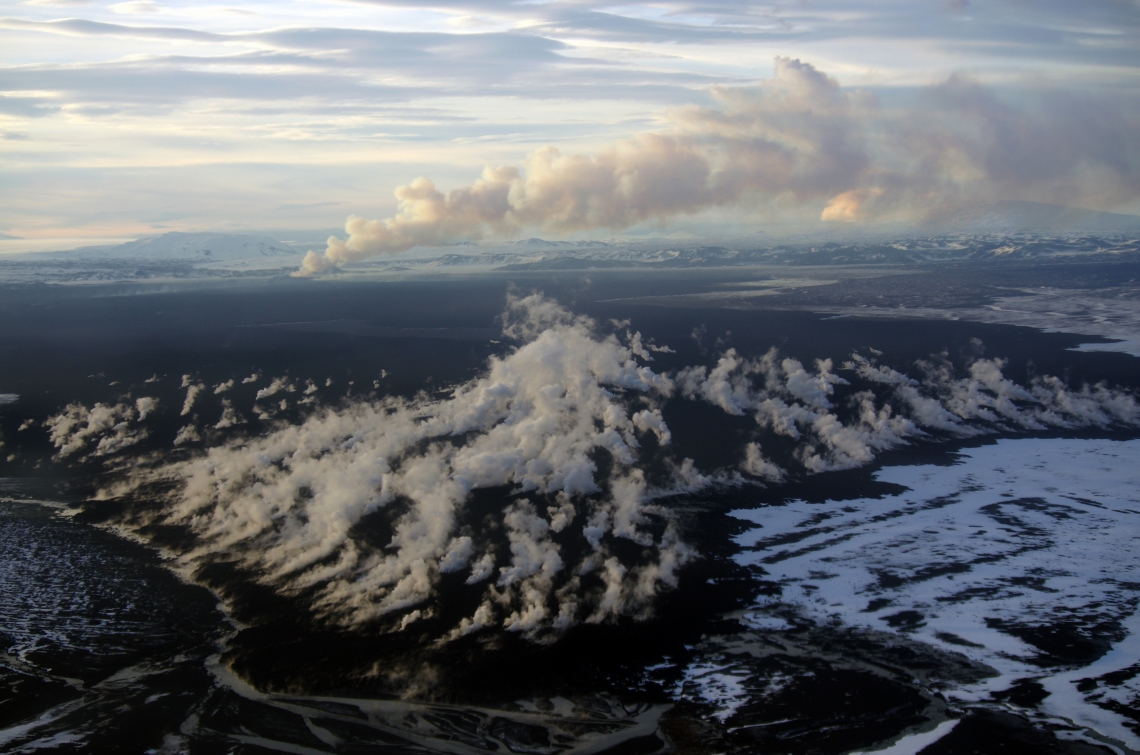 A team of scientists led by Christopher Hamilton of the University of Arizona is gearing up to send drones on exploration missions across a vast lava field in Iceland to test a next-generation Mars exploration concept.

Hamilton is the principal investigator on a project that has been awarded a $3.1 million NASA grant to develop a new concept combining rovers and unmanned aerial systems, commonly known as drones, to explore regions of the red planet that have been previously inaccessible. These new Rover–Aerial Vehicle Exploration Networks will be tested in Iceland to explore volcanic terrains similar to those observed on Mars.

NASA selected the RAVEN project as one of only four proposals out of 48 proposals competing for funding from NASA's Planetary Science and Technology Through Analog Research program.

RAVEN adds an entirely new approach to NASA's paradigm of planetary exploration, which traditionally has centered around four steps, each building on the scientific findings of the previous one: flyby, orbit, land and rove, according to Hamilton, an associate professor in the UArizona Lunar and Planetary Laboratory who oversees a team of 20 scientists and engineers involved in the RAVEN project.

The first spacecraft sent to a previously unvisited body in the solar system commonly executes a flyby pass to collect as many data as possible to inform subsequent robotic missions, which consist of another space probe placed into orbit, then a lander, which studies the surface in one place, and, finally, a rover built to move around to visit and analyze various points of scientific interest.

"With RAVEN, we're adding 'fly' to that list," Hamilton said. "And not only that – the whole concept is really geared towards building new technology and procedures for two robots to work together on an extraterrestrial body. We are going to look at how a rover and a drone can work together to maximize the scientific output of such a mission."

When the RAVEN team members looked for suitable proving grounds that would provide a realistic backdrop for their work, they found it in a vast lava field in the highlands of Iceland. This pristine area is otherworldly enough that NASA used it in preparing the Apollo astronauts for walking on the moon. After extensive exploration, the team homed in on the Holuhraun lava flow field, created by an eruption only five years ago.

"It's some of the newest real estate in the world," Hamilton said about the barren landscape, which is devoid of vegetation or topsoil. "What makes it especially interesting to us is that the lava was emplaced in a sandy area, which is very similar to what some Martian terrains look like."

Analog landscapes, such as Holuhraun, are invaluable to planetary scientists because they provide the next best thing to an alien world right here on Earth. Often shaped by similar geologic processes as their extraterrestrial counterparts, they serve as realistic mock environments to prepare explorers – both human and robotic – to safely navigate the real thing. A major challenge in exploring young volcanic terrains on Mars is that the surfaces are too rough for a rover to traverse. RAVEN will open new opportunities for exploration by enabling a rover and drone to work together. The drone will provide reconnaissance to scout the best path forward, and even be able to collect and return remote samples that are inaccessible to the rover.

"Volcanic terrains offer exciting targets for exploration because of their potential to generate habitable hydrothermal systems, which could support or preserve microbial life," Hamilton said. "RAVEN would make such locations accessible for the first time."

RAVEN builds upon recent developments in drone technology – such as the Mars Helicopter, accompanying NASA's Mars 2020 rover, which launched last July, and the DragonFly mission to Saturn's moon Titan.

RAVEN will provide a test platform for innovative technologies like remote sample acquisition and navigation based on computer-generated, 3D terrain models. Insights gathered during the three-year duration of the RAVEN project will directly inform next-generation follow-up missions to NASA's upcoming Mars 2020 mission, which will include a lightweight, twin-rotor drone named Ingenuity that will be used as a technology demonstration to test powered flight on Mars for the first time.

A centerpiece of the project is the RAVEN Claw, a prototype grabbing device attached to a drone that can be configured in various ways, for example to pick up rocks or scoop up sand, and to return cached samples to the rover. Also tested will be alternative payload configurations, including lidar, hyperspectral imaging and drilling technology.

Lidar, which is a method for measuring distances using laser light, is what allowed the UArizona-led OSIRIS-REx sample return mission to maneuver a spacecraft into the closest orbit ever accomplished around a solar system body.

A hyperspectral imaging camera enables RAVEN to see light of many wavelengths, promising greater scientific return from local operations by improving the scouting that directs the rover to the target location.

"It is a testament to the University of Arizona's long-standing track record in planetary exploration that NASA continues to trust our experts with finding solutions to some of our biggest challenges," said University of Arizona President Robert C. Robbins. "RAVEN is no exception, as this project is part of the bold vision to land humans on Mars in the not-too-distant future. I am excited to see where this project will lead."

The RAVEN project brings together institutions in three nations: the University of Arizona, the California Institute of Technology/Jet Propulsion Laboratory, Honeybee Robotics, the University of Tennessee and United States Geological Survey in the U.S.; the University of Western Ontario, the Canadian Space Agency and MacDonald, Dettwiler and Associates Ltd. in Canada; and the University of Iceland and Vatnajökull National Park Service in Iceland.