Asteroid's Scars Tell Stories of its Past 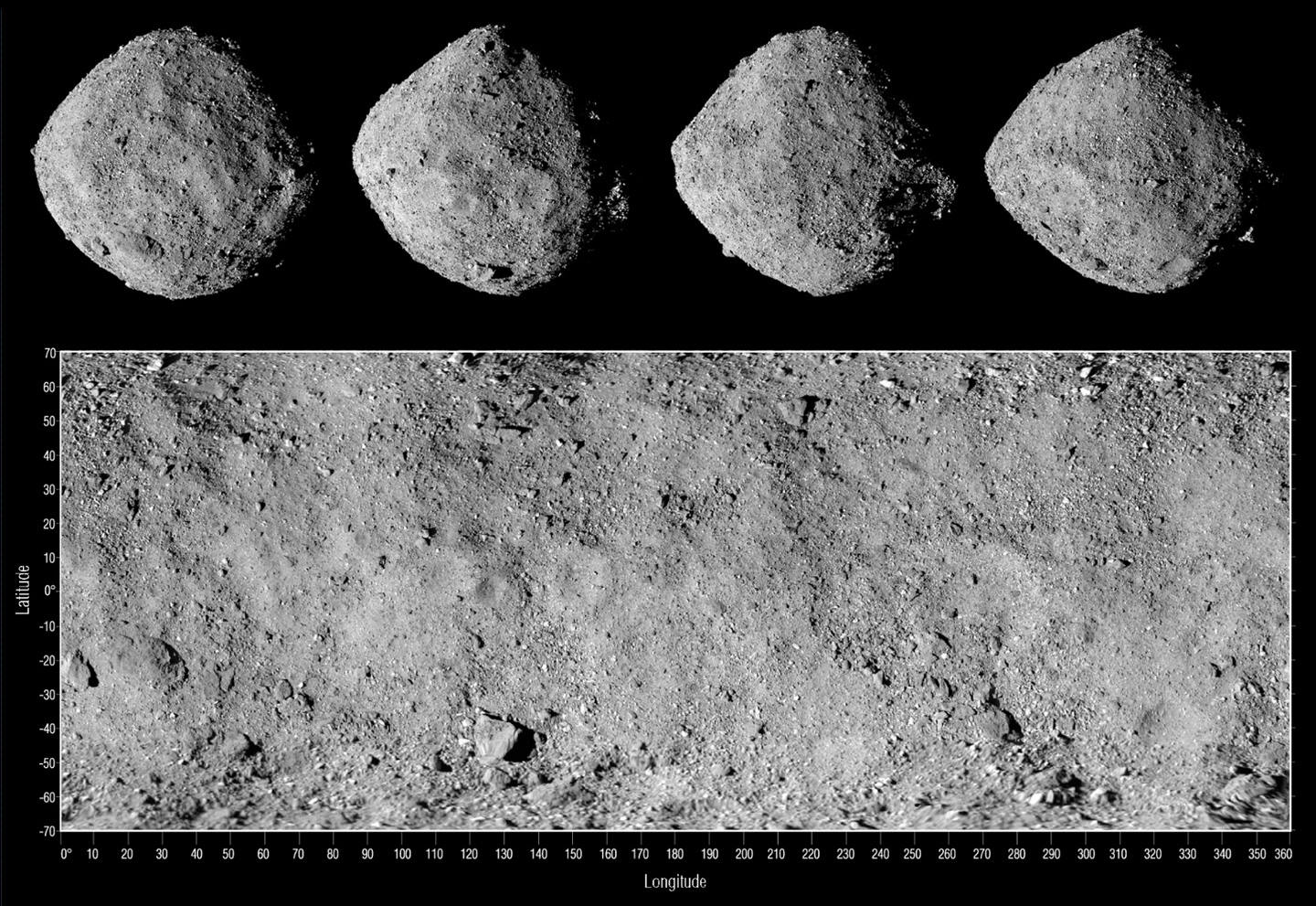 By studying impact marks on the surface of asteroid Bennu – the target of NASA's OSIRIS-REx mission – a team of researchers led by the University of Arizona has uncovered the asteroid's past and revealed that despite forming hundreds of millions of years ago, Bennu wandered into Earth's neighborhood only very recently.

The study, published in the journal Nature, provides a new benchmark for understanding the evolution of asteroids, offers insights into a poorly understood population of space debris hazardous to spacecraft, and enhances scientists' understanding of the solar system.

The researchers used images and laser-based measurements taken during a two-year surveying phase in which the OSIRIS-REx spacecraft, about the size of a 15-passenger van, orbited Bennu and broke the record for the smallest spacecraft to orbit a small body.

Presented at the opening day of the American Astronomical Society's Division of Planetary Science meeting on Oct. 26, the paper details the first observations and measurements of impact craters on individual boulders on an airless planetary surface since the Apollo missions to the moon 50 years ago, according to the authors.

The publication comes just a few days after a major milestone for NASA's University of Arizona-led OSIRIS-REx mission. On Oct. 20, the spacecraft successfully descended to asteroid Bennu to grab a sample from its boulder-scattered surface – a first for NASA. The sample has now been successfully stowed and will be returned to Earth for study in 2023, where it could give scientists insight into the earliest stages of the formation of our solar system.

Although Earth is being pelted with more than 100 tons of space debris each day, it is virtually impossible to find a rockface pitted by impacts from small objects at high velocities. Courtesy of our atmosphere, we get to enjoy any object smaller than a few meters as a shooting star rather than having to fear being struck by what essentially amounts to a bullet from outer space.

Planetary bodies lacking such a protective layer, however, bear the full brunt of a perpetual cosmic barrage, and they have the scars to show for it. High-resolution images taken by the OSIRIS-REx spacecraft during its two-year survey campaign allowed researchers to study even tiny craters, with diameters ranging from a centimeter to a meter, on Bennu's boulders.

The team found boulders of 1 meter or larger to be scarred, on average, by anywhere from one to 60 pits – impacted by space debris ranging in size from a few millimeters to tens of centimeters.

"I was surprised to see these features on the surface of Bennu," said the paper's lead author, Ronald Ballouz, a postdoctoral researcher in the UArizona Lunar and Planetary Laboratory and a scientist with the OSIRIS-REx regolith development working group. "The rocks tell their history through the craters they accumulated over time. We haven't observed anything like this since astronauts walked on the moon."

For Ballouz, who grew up during the 1990s in post-civil war Beirut, Lebanon, the image of a rock surface pitted with small impact craters evoked childhood memories of building walls riddled with bullet holes in his war-torn home country.

"Where I grew up, the buildings have bullet holes all over, and I never thought about it," he said. "It was just a fact of life. So, when I looked at the images from the asteroid, I was very curious, and I immediately thought these must be impact features."

"The objects that formed the craters on Bennu's boulders fall within this gap that we don't really know much about," Ballouz said, adding that rocks in that size range are an important field of study, mainly because they represent hazards for spacecraft in orbit around Earth. "An impact from one of these millimeter to centimeter-size objects at speeds of 45,000 miles per hour can be dangerous."

This composite image of a boulder on Bennu’s surface shows the cascading rim of one of the asteroid’s ancient craters that originated while Bennu resided in the asteroid belt. The image combines photos from OSIRIS-REx and reconstructed shape models built from the OSIRIS-REx laser altimeter instrument. The overlaid colors highlight the topography of the boulder (warmer colors are higher elevation).University of Arizona/Johns Hopkins APL/York University

Ballouz and his team developed a technique to quantify the strength of solid objects using remote observations of craters on the surfaces of boulders – a mathematical formula that allows researchers to calculate the maximum impact energy that a boulder of a given size and strength could endure before being smashed. In other words, the crater distribution found on Bennu today keeps a historical record of the frequency, size and velocity of impact events the asteroid has experienced throughout its history.

"The idea is actually pretty simple," Ballouz said, using a building exposed to artillery fire as an analogy to boulders on an asteroid. "We ask, 'What is the largest crater you can make on that wall before the wall disintegrates?' Based on observations of multiple walls of the same size, but with different sized craters, you can get some idea of the strength of that wall."

The same holds true for a boulder on an asteroid or other airless body, said Ballouz, who added that the approach could be used on any other asteroid or airless body that astronauts or spacecraft may visit in the future.

"If a boulder gets hit by something larger than an object that would leave a certain size cater, it would just disappear," he explained. In other words, the size distribution of boulders that have persisted on Bennu serve as silent witnesses to its geologic past.

A Newcomer to Earth's Neighborhood

Applying the technique to boulders ranging in size from pebbles to parking garages, the researchers were able to make inferences about the sizes and type of impactors to which the boulders were exposed, and for how long.

The authors conclude that the largest craters on Bennu's boulders were created while Bennu resided in the asteroid belt, where impact speeds are lower than in the near-Earth environment, but are more frequent and often near the limit of what the boulders could withstand. Smaller craters, on the other hand, were acquired more recently, during Bennu's time in near-Earth space, where impact speeds are higher but potentially disruptive impactors are much less common.

Based on these calculations, the authors determine that Bennu is a relative newcomer to Earth's neighborhood. Although it is thought to have formed in the main asteroid belt more than 100 million years ago, it is estimated that it was kicked out of the asteroid belt and migrated to its current territory only 1.75 million years ago. Extending the results to other near-Earth objects, or NEOs, the researchers also suggest that these objects likely come from parent bodies that fall in the category of asteroids, which are mostly rocky with little or no ice, rather than comets, which have more ice than rock.

While theoretical models suggest that the asteroid belt is the reservoir for NEOs, no observational evidence of their provenance was available other than meteorites that fell to Earth and were collected, Ballouz said. With these data, researchers can validate their models of where NEOs come from, according to Ballouz, and get an idea of how strong and solid these objects are – crucial information for any potential missions targeting asteroids in the future for research, resource extraction or protecting Earth from impact.