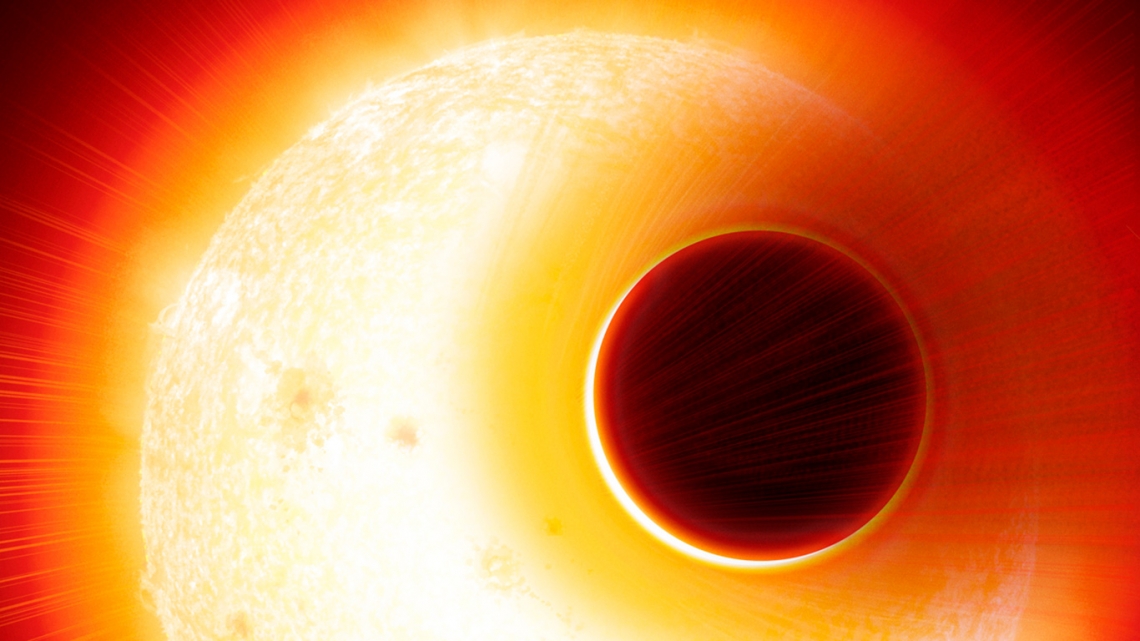 An international team of astronomers used data from the Hubble Space Telescope to discover the signature of a magnetic field in a planet outside our solar system. The finding, described in a paper in the journal Nature Astronomy, marks the first time such a feature has been seen on an exoplanet.

A magnetic field best explains the observations of an extended region of charged carbon particles that surround the planet and stream away from it in a long tail. Magnetic fields play a crucial role in protecting planetary atmospheres, so the ability to detect the magnetic fields of exoplanets is a significant step toward better understanding what these alien worlds may look like.

The team used Hubble to observe the exoplanet HAT-P-11b, a Neptune-sized planet 123 light-years from Earth, pass directly across the face of its host star six times in what is known as a "transit." The observations were made in the ultraviolet light spectrum, which is just beyond what the human eye can see.

Hubble detected carbon ions – charged particles that interact with magnetic fields – surrounding the planet in what is known as a magnetosphere. A magnetosphere is a region around a celestial object (such as Earth) that is formed by the object's interaction with the solar wind emitted by its host star.

"This is the first time the signature of an exoplanet's magnetic field has been directly detected on a planet outside our solar system," said Gilda Ballester, an adjunct research professor at the University of Arizona Lunar and Planetary Laboratory and one of the paper's co-authors. "A strong magnetic field on a planet like Earth can protect its atmosphere and surface from direct bombardment of the energetic particles that make up the solar wind. These processes heavily affect the evolution of life on a planet like Earth because the magnetic field shelters organisms from these energetic particles."

The discovery of HAT-P-11b's magnetosphere is a significant step toward an improved understanding of the habitability of an exoplanet. Not all planets and moons in our solar system have their own magnetic fields, and the connection between magnetic fields and a planet’s habitability still needs more study, according to the researchers.

"HAT-P-11 b has proven to be a very exciting target, because Hubble's UV transit observations have revealed a magnetosphere, seen as both an extended ion component around the planet and long tail of escaping ions," Ballester said, adding that this general method could be used to detect magnetospheres on a variety of exoplanets and to assess their role in potential habitability.

Ballester, a principal investigator of one of the Hubble Space Telescope programs that observed HAT-P-11b, contributed to the selection of this specific target for UV studies. A key discovery was the observation of carbon ions not only in a region surrounding the planet, but also extending in a long tail that streamed away from the planet at average speeds of 100,000 mph. The tail reached into space for at least 1 astronomical unit, the distance between Earth and sun.

Researchers led by the paper's first author, Lotfi Ben-Jaffel at the Institute of Astrophysics in Paris, then used 3D computer simulations to model interactions between the planet's uppermost atmospheric regions and magnetic field with the incoming solar wind.

The physics in the magnetospheres of Earth and HAT-P-11b are the same; however, the exoplanet's close proximity to its star – just one-twentieth of the distance from the Earth to the sun – causes its upper atmosphere to warm and essentially "boil off" into space, resulting in the formation of the magnetotail.

Researchers also found that the metallicity of HAT-P-11b’s atmosphere – the number of chemical elements in an object that are heavier than hydrogen and helium – is lower than expected. In our solar system, the icy gas planets, Neptune and Uranus, are rich in metals but have weak magnetic fields, while the much larger gas planets, Jupiter and Saturn, have low metallicity and strong magnetic fields. HAT-P-11b's low atmospheric metallicity challenges current models of exoplanet formation, the authors say.

"Although HAT-P-11b's mass is only 8% of that of Jupiter, we think the exoplanet more resembles a mini-Jupiter than a Neptune," Ballester said. "The atmospheric composition we see on HAT-P-11b suggests that further work needs to be done to refine current theories of how certain exoplanets form in general."