Best of Both Worlds: Asteroids and Massive Mergers 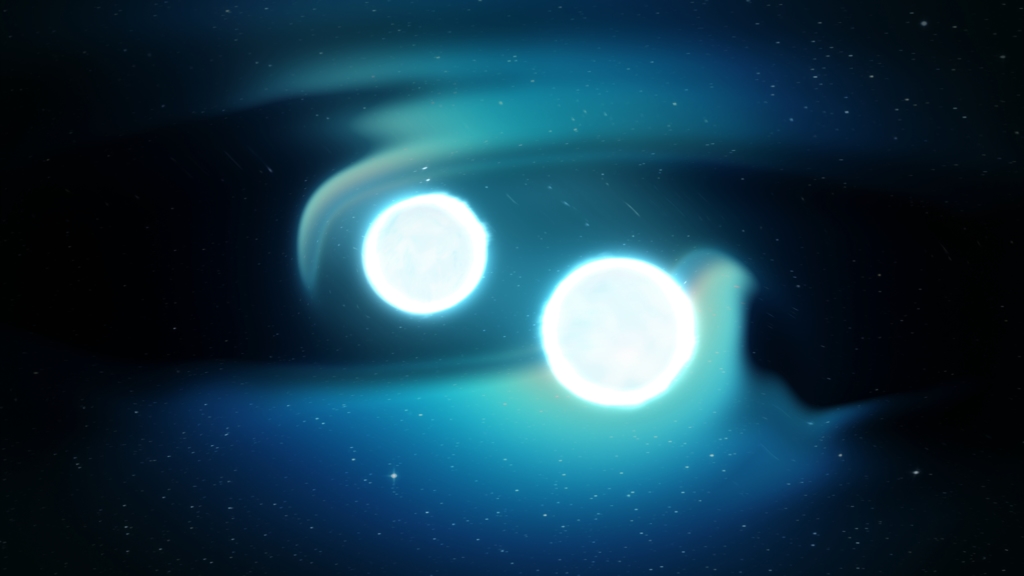 The race is on. Since the construction of technology able to detect the ripples in space and time triggered by collisions from massive objects in the universe, astronomers around the world have been searching for the bursts of light that could accompany such collisions, which are thought to be the sources of rare heavy elements.

The University of Arizona’s Steward Observatory has partnered with the Catalina Sky Survey, which searches for near-Earth asteroids from atop Mount Lemmon, in an effort dubbed Searches after Gravitational Waves Using ARizona Observatories, or SAGUARO, to find optical counterparts to massive mergers.

“Catalina Sky Survey has all of this infrastructure for their asteroid survey. So we have deployed additional software to take gravitational wave alerts from LIGO (the Laser Interferometer Gravitational-Wave Observatory) and the Virgo interferometer then notify the survey to search an area of sky most likely to contain the optical counterpart,” said Michael Lundquist, postdoctoral research associate and lead author on the study published today in the Astrophysical Journal Letters.

“Essentially, instead of searching the next section of sky that we would normally, we go off and observe some other area that has a higher probability of containing an optical counterpart of a gravitational wave event,” said Eric Christensen, Catalina Sky Survey director and Lunar and Planetary Laboratory senior staff scientist. “The main idea is we can run this system while still maintaining the asteroid search.”

The ongoing campaign began in April, and in that month alone, the team was notified of three massive collisions. Because it is difficult to tell the precise location from which the gravitational wave originated, locating optical counterparts can be difficult.

According to Lundquist, two strategies are being employed. In the first, teams with small telescopes target galaxies that are at the right approximate distance, according to the gravitational wave signal. Catalina Sky Survey, on the other hand, utilizes a 60-inch telescope with a wide field of view to scan large swaths of sky in 30 minutes.

Three alerts, on April 9, 25 and 26, triggered the team’s software to search nearly 20,000 objects. Machine learning software then trimmed down the total number of potential optical counterparts to five.

“There are some people who think you can get an optical counterpart to those, but it’s definitely inconclusive,” he said.

The second event was a merger of two neutron stars, the incredibly dense core of a collapsed giant star. The third is thought to be a merger between a neutron star and a black hole, Lundquist said.

While no teams confirmed optical counterparts, the UA team did find several supernovae. They also used the Large Binocular Telescope Observatory to spectroscopically classify one promising target from another group. It was determined to be a supernova and not associated with the gravitational wave event.

“We also found a near-Earth object in the search field on April 25,” Christensen said. “That proves right there we can do both things at the same time.”

They were able to do this because Catalina Sky Survey has observations of the same swaths of sky going back many years. Many other groups don’t have easy access to past photos for comparison, offering the UA team a leg up.

“We have really nice references,” Lundquist said. “We subtract the new image from the old image and use that difference to look for anything new in the sky.”

“The process Michael described,” Christensen said, “starting with a large number of candidate detections and filtering down to whatever the true detections are, is very familiar. We do that with near-Earth objects, as well.”

The team is planning on deploying a second telescope in the hunt for optical counterparts: Catalina Sky Survey’s 0.7-meter Schmidt telescope. While the telescope is smaller than the 60-inch telescope, it has an even wider field of view, which allows astronomers to quickly search an even larger chunk of sky. They’ve also improved their machine learning software to filter out stars that regularly change in brightness.

"Catalina Sky Survey takes hundreds of thousands of images of the sky every year, from multiple telescopes. Our survey telescopes image the entire visible nighttime sky several times per month, then we are looking for one kind of narrow slice of the pie," Christensen said. “So, we’ve been willing to share the data with whoever wants to use it.”