Beyond Jupiter, Researchers Discovered a 'Cradle of Comets' 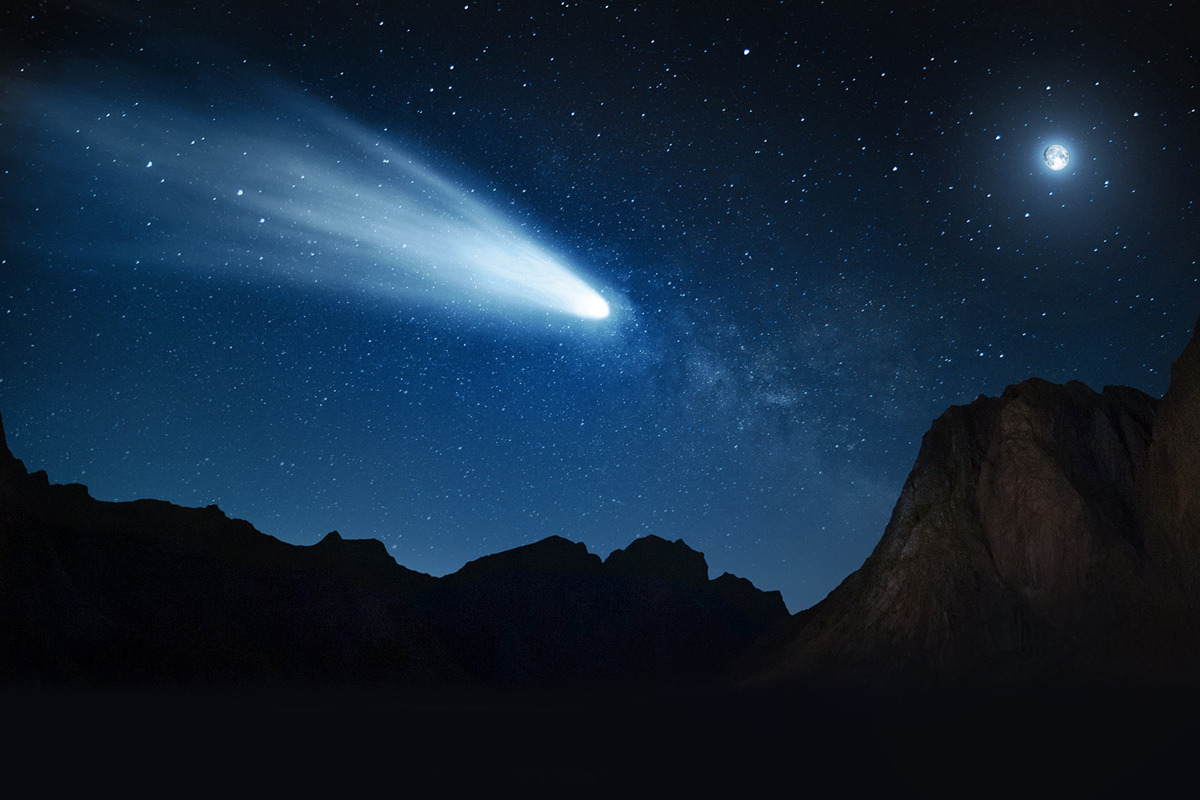 Comets are known to have a temper. As they swoop in from the outer edges of our solar system, these icy bodies begin spewing gas and dust as they venture closer to the sun. Their luminous outbursts can result in spectacular sights that grace the night sky for days, weeks or even months.

But comets aren't born that way, and their pathway from their original formation location toward the inner solar system has been debated for a long time. Comets are of great interest to planetary scientists because they are likely to be the most pristine remnants of material left over from the birth of our solar system.

In a study published in The Astrophysical Journal Letters, a team of researchers including Kathryn Volk and Walter Harris at the University of Arizona Lunar and Planetary Laboratory report the discovery of an orbital region just beyond Jupiter that acts as a "comet gateway." This pathway funnels icy bodies called centaurs from the region of the giant planets – Jupiter, Saturn, Uranus and Neptune – into the inner solar system, where they can become regular visitors of Earth's neighborhood, cosmically speaking.

Roughly shaped like an imaginary donut encircling the area, the gateway was uncovered as part of a simulation of centaurs, small icy bodies traveling on chaotic orbits between Jupiter and Neptune.

Centaurs are believed to originate in the Kuiper belt, a region populated by icy objects beyond Neptune and extending out to about 50 Astronomical Units, or 50 times the average distance between the sun and the Earth. Close encounters with Neptune nudge some of them onto inward trajectories, and they become centaurs, which act as the source population of the roughly 1,000 short-period comets that zip around the inner solar system. These comets, also known as Jupiter-family comets, or JFCs, include comets visited by spacecraft missions such as Tempel 1 (Deep Impact), Wild 2 (Stardust) and 67P/Churyumov-Gerasimenko (Rosetta).

"The chaotic nature of their orbits obscures the exact pathways these centaurs follow on their way to becoming JFCs," said Volk, a co-author on the paper and an associate staff scientist who studies Kuiper belt objects, planetary dynamics and planets outside our solar system. "This makes it difficult to figure out where exactly they came from and where they might go in the future."

Jostled by the gravitational fields of several nearby giant planets – Jupiter, Saturn and Neptune – centaurs don’t tend to stick around, making for a high-turnover neighborhood, Harris said.

"They rattle around for a few million years, perhaps a few tens of millions of years, but none of them were there even close to the time when the solar system formed," he said.

"We know of 300 centaurs that we can see through telescopes, but that's only the tip of an iceberg of an estimated 10 million such objects," Harris added.

"Most centaurs we know of weren't discovered until CCD's became available, plus you need the help of a computer to search for these objects," Volk said. "But there is a large bias in observations because the small objects simply aren't bright enough to be detected."

Where Comets Go to Die

Every pass around the sun inflicts more wear and tear on a comet until it eventually breaks apart, has a close encounter with a planet that ejects it from the inner solar system, or its volatiles – mostly gas and water – are depleted.

"Often, much of the dust remains and coats the surface, so the comet doesn't heat up much anymore and it goes dormant," Harris said.

By some mechanism, a steady supply of "baby comets" must replace those that have run their course, "but until now, we didn't know where they were coming from," he added.

To better understand how centaurs become JFCs, the research team focused on creating computer simulations that could reproduce the orbit of 29P/Schwassmann-Wachmann 1, or SW1, a centaur discovered in 1927 and thought to be about 40 miles across.

SW1 has long puzzled astronomers with its high activity and frequent explosive outbursts despite the fact that is too far from the sun for water ice to melt. Both its orbit and activity put SW1 in an evolutionary middle ground between the other centaurs and the JFCs, and the original goal of the investigation was to explore whether SW1’s current circumstances were consistent with the orbital progression of the other centaurs.

To accomplish this, the team modeled the evolution of bodies from beyond Neptune’s orbit, through the giant planet’s region and inside Jupiter’s orbit.

"The results of our simulation included several findings that fundamentally alter our understanding of comet evolution," Harris said. "Of the new centaurs tracked by the simulation, more than one in five were found to enter an orbit similar to that of SW1 at some point in their evolution."

In other words, even though SW1 appears to be the only large centaur of the handful of objects currently known to occupy the "cradle of comets," it is not the outlier it was thought to be, but rather ordinary for a centaur, according to Harris.

In addition to the commonplace nature of SW1’s orbit, the simulations led to an even more surprising discovery.

"Centaurs passing through this region are the source of more than two-thirds of all Jupiter-family comets," Harris said, "making this the primary gateway through which these comets are produced."

"Historically, our assumption has been that the region around Jupiter is fairly empty, cleaned out by the giant planet's gravity, but our results teach us that there is a region that is constantly being fed," Volk says.

This constant source of new objects may help explain the surprising rate of icy body impacts with Jupiter, such as the famous Shoemaker-Levy 9 event in 1994.

A Comet Worthy of Worship

Based on estimates and calculations of the number and size of objects entering, inhabiting and leaving the gateway region, the study predicted it should sustain an average population of about 1,000 Jupiter-family objects, not too far off the 500 that astronomers have found so far.

The results also showed that the gateway region triggers a rapid transition: once a centaur has entered it, it is very likely to become a JFC within a few thousand years, a blink of an eye in solar system timeframes.

The calculations suggest that an object of SW1's size should enter the region every 50,000 years, making it likely that SW1 is the largest centaur to begin this transition in all of recorded human history, Harris and Volk suggest. In fact, SW1 could be on its way to becoming a "super comet" within a few thousand years.

Comparable in size and activity to comet Hale-Bopp, one of the brightest comets of the 20th century, SW1 has a 70% chance of becoming what could potentially amount to the most spectacular comet humankind has ever seen, the authors suggest.

"Our descendants could be seeing a comet 10 to 100 times more active than the famous Halley comet," Harris said, "except SW1 would be returning every six to 10 years instead of every 75."

"If there had been a comet this bright in the last 10,000 years we would know about it," Volk said.

"We take this as strong evidence that a similar event has not happened at least since then," Harris said, "because ancient civilizations would not only have recorded the comet, they may have worshiped it!"

Mapping the Solar System: From the Moon to Bennu