The Book on the Birthplace of Planetary Science 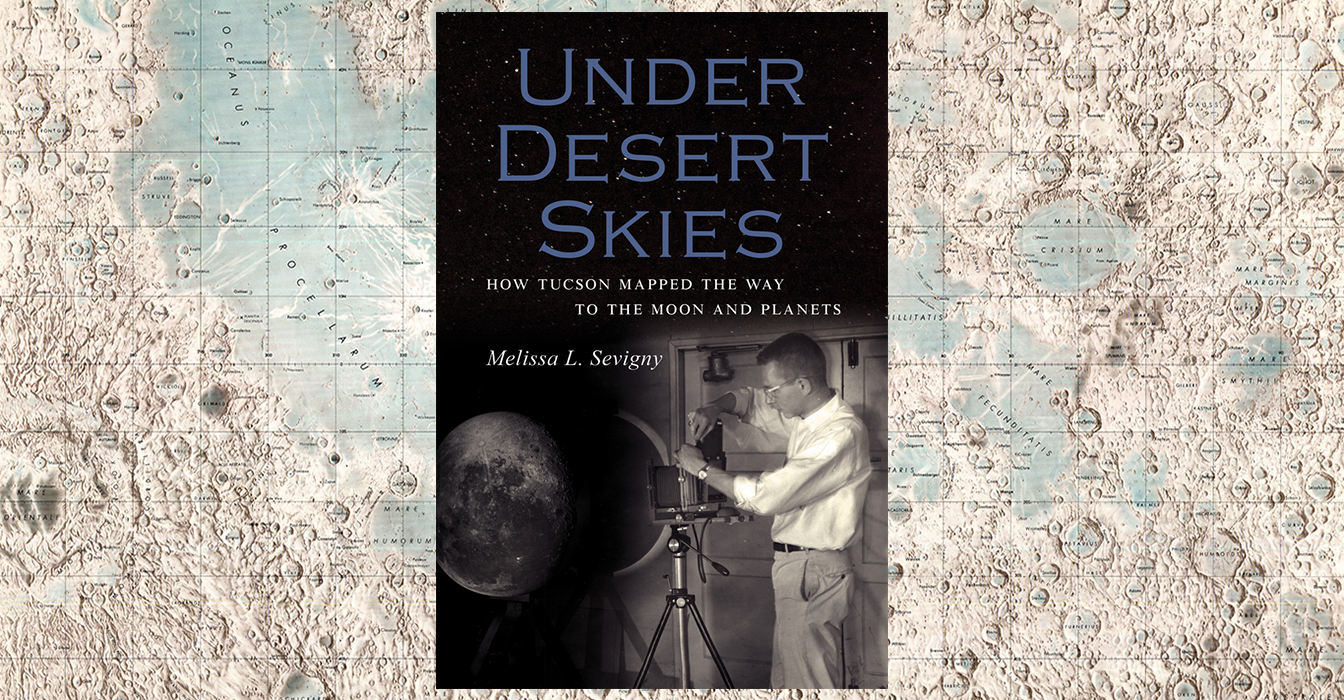 With the countdown underway to September's launch of the OSIRIS-REx asteroid sample return mission, University of Arizona alumna Melissa Sevigny, author of the new book "Under Desert Skies: How Tucson Mapped the Way to the Moon and Planets," talks about her love for geology and the planets - and how she undertook telling the story of the UA as the birthplace of planetary science.

How did you get involved in chronicling the history of the UA Lunar and Planetary Laboratory?

Growing up in Tucson under those beautiful dark skies, I have always been in love with the geology and the skies in the desert Southwest. First, I wanted to be a geologist, then an astrobiologist, and later, when I was in college as an environmental science major, I realized that I'm a storyteller. In 2006, when I was in my sophomore year, I was hired by Michael Drake, then the director of the Lunar and Planetary Laboratory, as a NASA Space Grant intern to collect stories and interviews from faculty members, staff and students to capture the institute's history for LPL's website.

What was Michael Drake's role in telling this story?

As I wrote in the book's prologue, he described my task in a single line when he hired me: "Capture the history of LPL from the old-timers while they're still alive and turn that into a transcript, if not a narrative." Michael Drake encouraged me as my mentor and my guide, but he was very hands-off in a good way. He had a wonderful skill to point people in a direction but then let them loose. He certainly believed that it was important to capture these stories, and he was interested in interdisciplinary work.

How did the project morph into a book?

Originally the idea was to collect transcripts of the interviews for the record, and eventually Mike and I cooked up the idea of a dedicated website about the history of LPL. The project turned out to be a wonderful marriage between science and storytelling, and by the end of the first year I was so excited about it that I asked Mike if I could keep working on it. At the time I wasn't thinking of anything that was going to have a wide audience, let alone a book. I just wanted to preserve some of the stories and the history. It wasn't until he passed away in 2011 that I picked it up again. I had written a draft as part of my honors thesis. I felt so affected by his passing, and that of several other people I had interviewed, that I wanted to see if I could pull out this project and take it one step further.

How did you go about structuring your material into a book?

It was a struggle. What I had were these disparate stories that spanned more than half a century, and it was a challenge to find a way to join all those stories together. I didn't want the book to be just an institutional history, but an account of the rise of the field of planetary science as a whole - how did this field come to be? I'm a fan of laying pages out on the floor and taking scissors to them to create an outline. I called on UA Special Collections and the LPL's Space Imagery Center, which host extensive archives where you could get lost for years if you wanted to. The process of collecting the interviews took about four years, and another two or so years to write the book. It's hard to say, because I had to pick up and put down the project at times.

How much material ended up in the book?

For the manuscript, I strung together quotes from more than 60 interviews I had collected. Each interview is about 10 pages long on average. There is a lot of material that never made it into the book. All in all, I probably had close to a thousand pages of material. I sifted through that to find the stories that captured my imagination most. There are many books on planetary science out there, so I wanted to tell the new stories that hadn't been told before. Many got left out, because otherwise the book would have been a thousand pages long. So I tried to fit these stories people fed me together like puzzle pieces, to create a coherent image about how the field came together. I didn't want the book to be a biography about Gerard Kuiper. He was such a forceful personality and could have easily taken over the entire book. There are so many characters, including students, too many to count, that came together in this amazing effort to create the field of planetary science. The most challenging point in the process is the publication deadline. It forced me to accept that this is now the point where I can no longer change anything, or add any more stories. That point comes about a year in advance before the book makes it onto the shelves in the bookstore. During that last round of editing, all you can do is fix spelling and grammar.

Tell us about some of the most unexpected or surprising things you discovered.

One of the most delightful things I discovered is how back in the day, amateurs could make such important contributions to a nascent scientific discipline. British amateur astronomer Ewen Whitaker, for example, who had no Ph.D., was so important in getting America to the moon. There was no field of planetary science, so there were only amateurs to tackle that goal of getting to the moon. Often when we tell science stories, we talk about Ph.D.s and academic accolades, and everything can get a little bit intimidating, but here there were so many people at the right place, at the right time, whose passion mattered much more than the training they had received. Another surprise was to learn how geologists changed their minds about the role catastrophic events play in shaping the planets and life on Earth. LPL was involved in the discovery of the Chicxulub crater made by the asteroid that wiped out the dinosaurs. Prior to that discovery, there was a widespread understanding among geologists that geology happens very slowly and gradually. Discoveries like Chicxulub or witnessing comet Shoemaker-Levy 9 slamming into Jupiter in 1994 provided evidence that these events really do happen. The giant impact theory about how the moon was created came about around that same time, and that caused that sea change. Another example is how infrared observations that hadn't been used for planetary science before became a tool for planetary discovery. For the book, all those threads had to be joined together.

What stories about the UA and LPL have not been told yet but should be?

I think there's a bigger story with all the geology stuff, and I may only be saying that because I love geology. Take the asteroid impact that coincided with the dinosaur extinction, for example. Luis Alvarez (who published a paper in 1980 with the hypothesis that a large asteroid had struck Earth at the time of the dinosaur extinction) got all the attention, but there was a UA grad student at the time, Alan Russell Hildebrand, who did a lot of work to pinpoint where it hit, leading to the discovery of the crater much later. There is so much that could be expanded out into bigger stories. One story I can think of is about the scientists who make careers out of working on spacecraft missions. If a mission fails, if the spacecraft crashes or disappears, all of a sudden there is no publication on their resume. Scientists going into that are taking a huge risk with their livelihoods. And of course, Steward Observatory and the UA’s Department of Astronomy have a long, rich history, and so does Kitt Peak. I barely brushed on their stories in the book because I wanted to stay focused on planetary science.

How do you see the UA's role in space sciences then and now?

When LPL first started, Tucson had this important role to play in mapping the moon. It was the only place where anyone was studying the moon. Then President Kennedy made his famous announcement, "We're going to the moon," but there was no one who had maps of the moon. Kuiper and his team were making those maps. The UA has had such an important role in space exploration, and as a crucible for students, churning out researchers working on future missions. OSIRIS-REx is going to be such a great mission.

Do you have any other books in the works?

"Mythical River" was published just this past March. It's about water in the Southwest, specifically how we constantly bring water into the Southwest from far away to solve our problems, another very science-heavy book, but more personal, some memoir in there. I write about a belief that there was this mythical river, Buenaventura, which was made up in 1776 and appeared on maps for 75 years, which I use as a metaphor for the misguided idea that water will just magically appear when we need it. It was really believed to be there. Americans at the time had no experience with dry places, and that legacy still persists today. The book also tells the story of our modern canals and dams, and restoration efforts to live in a more sustainable way in the desert.

Read More:
The Book on the Birthplace of Planetary Science