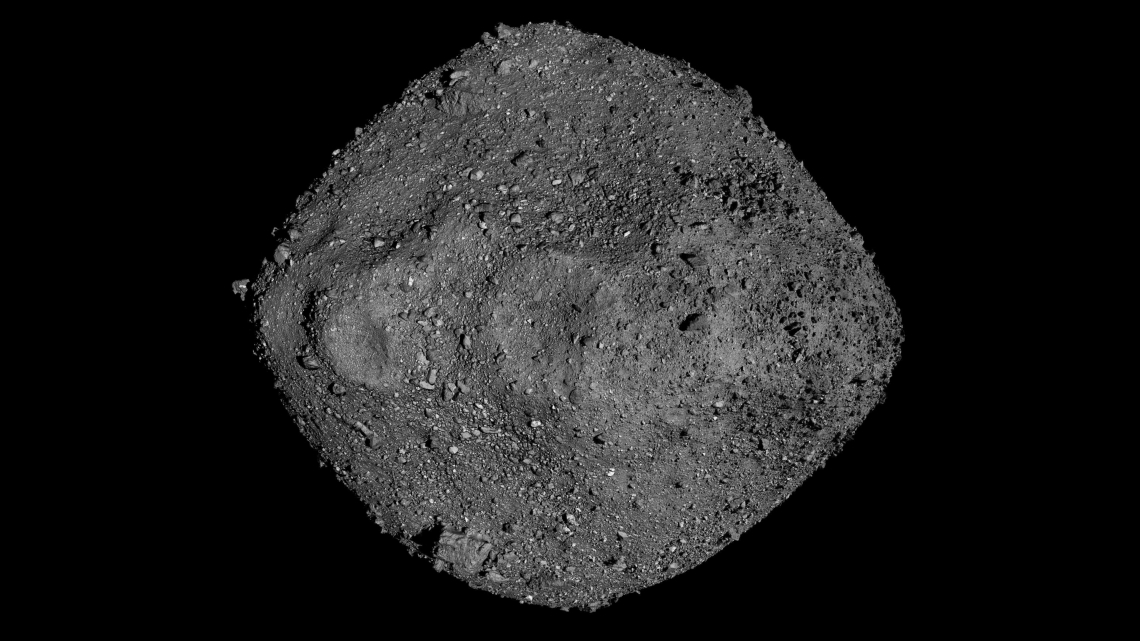 Scientists thought asteroid Bennu's surface would be like a sandy beach, abundant in fine sand and pebbles, which would have been perfect for collecting samples. Past telescope observations from Earth's orbit had suggested the presence of ­­large swaths of fine-grain material called fine regolith that's smaller than a few centimeters.

But when the spacecraft of NASA's University of Arizona-led OSIRIS-REx asteroid sample return mission arrived at Bennu in late 2018, the mission team saw a surface covered in boulders. The mysterious lack of fine regolith became even more surprising when mission scientists observed evidence of processes capable of grinding boulders into fine regolith.

New research, published in Nature and led by mission team member Saverio Cambioni, used machine learning and surface temperature data to solve the mystery. Cambioni was a graduate student at the UArizona Lunar and Planetary Laboratory when the research was conducted and is now a postdoctoral distinguished fellow in the Department of Earth, Atmospheric and Planetary Sciences at the Massachusetts Institute of Technology. He and his colleagues ultimately found that Bennu's highly porous rocks are responsible for the surface's surprising lack of fine regolith.

"The 'REx' in OSIRIS-REx stands for Regolith Explorer, so mapping and characterizing the surface of the asteroid was a main goal," said study co-author and OSIRIS-REx principal investigator Dante Lauretta, a Regents Professor of Planetary Sciences at the University of Arizona. "The spacecraft collected very high-resolution data for Bennu's entire surface, which was down to 3 millimeters per pixel at some locations. Beyond scientific interest, the lack of fine regolith became a challenge for the mission itself, because the spacecraft was designed to collect such material."

To collect a sample to return to Earth, the OSIRIS-REx spacecraft was built to navigate within an area on Bennu roughly the size of a 100-space parking lot. However, because of numerous boulders, the safe sampling site was reduced to roughly the size of five parking spaces. The spacecraft successfully made contact with Bennu to collect sample material in October 2020.

A Rocky Start and Solid Answers

"When the first images of Bennu came in, we noted some areas where the resolution was not high enough to see whether there were small rocks or fine regolith. We started using our machine learning approach to separate fine regolith from rocks using thermal emission (infrared) data," Cambioni said.

The thermal emission from fine regolith is different from that of larger rocks, because the former is controlled by the size of its particles, while the latter is controlled by rock porosity. The team first built a library of examples of thermal emissions associated with fine regolith mixed in different proportions with rocks of various porosity. Next, they used machine learning techniques to teach a computer how to "connect the dots" between the examples. Then, they used the machine learning software to analyze the thermal emission from 122 areas on the surface of Bennu observed both during the day and the night.

"Only a machine learning algorithm could efficiently explore a dataset this large," Cambioni said.

When the data analysis was completed, Cambioni and his collaborators found something surprising: The fine regolith was not randomly distributed on Bennu but instead was lower where rocks were more porous, which was on most of the surface.

The team concluded that very little fine regolith is produced by Bennu's highly porous rocks because these rocks are compressed rather than fragmented by meteoroid impacts. Like a sponge, the voids in rocks cushion the blow from incoming meteors. These findings are also in agreement with laboratory experiments from other research groups.

"Basically, a big part of the energy of the impact goes into crushing the pores restricting the fragmentation of the rocks and the production of new fine regolith," said study co-author Chrysa Avdellidou, a postdoctoral researcher at the French National Centre for Scientific Research (CNRS) – Lagrange Laboratory of the Côte d'Azur Observatory and University in France.

Additionally, cracking caused by the heating and cooling of Bennu's rocks as the asteroid rotates through day and night proceeds more slowly in porous rocks than in denser rocks, further frustrating the production of fine regolith.

"When OSIRIS-REx delivers its sample of Bennu (to Earth) in September 2023, scientists will be able to study the samples in detail," said Jason Dworkin, OSIRIS-REx project scientist at NASA Goddard Space Flight Center. "This includes testing the physical properties of the rocks to verify this study."

Other missions have evidence to confirm the team's findings. The Japanese Aerospace Exploration Agency's Hayabusa 2 mission to Ryugu, a carbonaceous asteroid like Bennu, found that Ryugu also lacks fine regolith and has highly porous rocks. Conversely, JAXA's Hayabusa mission to the asteroid Itokawa in 2005 revealed abundant fine regolith on the surface of Itokawa, an S-type asteroid with rocks of a different composition than Bennu and Ryugu. A previous study by Cambioni and his colleagues provided evidence that Itokawa's rocks are less porous than Bennu's and Ryugu's, using observations from Earth.

"For decades, astronomers disputed that small, near-Earth asteroids could have bare-rock surfaces. The most indisputable evidence that these small asteroids could have substantial fine regolith emerged when spacecraft visited S-type asteroids Eros and Itokawa in the 2000s and found fine regolith on their surfaces," said study co-author Marco Delbo, research director with CNRS, also at the Lagrange Laboratory.

The team predicts that large swaths of fine regolith should be uncommon on carbonaceous asteroids, which are the most common of all asteroid types and are thought to have high-porosity rocks like Bennu. In contrast, terrains rich in fine regolith should be common on S-type asteroids, which are the second-most common group in the solar system, and are thought to have denser, less porous rocks than carbonaceous asteroids.

"This is an important piece in the puzzle of what drives the diversity of asteroids' surfaces. Asteroids are thought to be fossils of the solar system, so understanding the evolution they have undergone in time is crucial to comprehend how the solar system formed and evolved," said Cambioni. "Now that we know this fundamental difference between carbonaceous and S-type asteroids, future teams can better prepare sample collection missions depending on the nature of the target asteroid."