Mapping Rock Glaciers to Understand Their Future on Earth and Mars 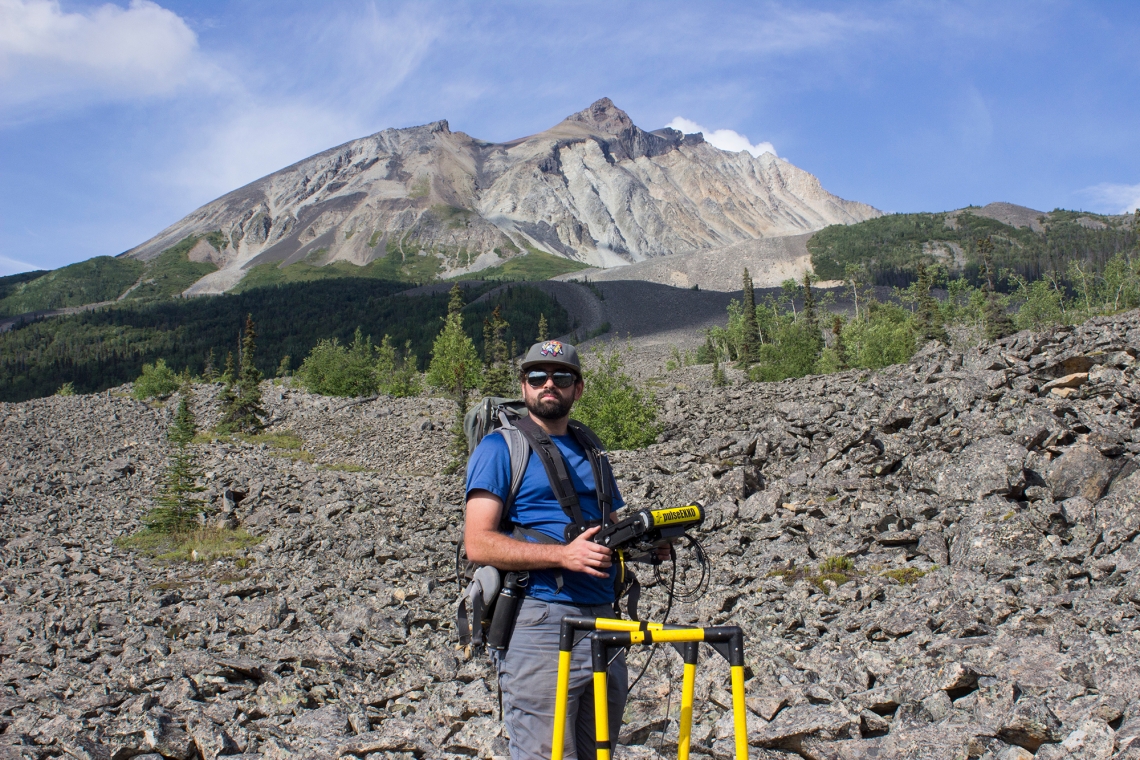 Standing on a rock glacier is what Tyler Meng imagines it would be like to stand on the surface of Mars. The glacier's barren and wrinkled landscape looks like Silly Putty that's drooped under gravity's pull, offering few clues that a frozen, debris-laden giant lurks beneath the surface.

Rock glaciers are so named because unlike pure ice glaciers, they are a mix of frozen water, sand and rocks. They are generally found at the base of steep mountainsides or cliffs that have slowly dropped rock debris, which then mixes with glacier ice and refrozen snowmelt. Rock glaciers also exist on Mars.

Meng – who is pursuing a doctoral degree in planetary science at the University of Arizona, with a minor in geosciences – is lead author of a study in the Journal of Glaciology that describes a new method to determine rock glaciers' ice thickness and the ratio of ice to debris, allowing for more precise measurements of these glaciers than previously possible. Meng and his adviser and co-author Jack Holt, a UArizona planetary sciences and geosciences professor, used this information to create maps of four rock glaciers in Colorado, Wyoming and Alaska.

Their work, and future work that uses this method, will allow scientists to better understand water resources on both Earth and Mars, as well as how resilient this type of buried ice will be to the changing climate on both planets.

Rock glaciers are hidden and insulated by debris on top of ice, and their movement is affected by the rocks trapped inside of them.

"You can think of the rocks like an insulating blanket," Meng said. "Beyond a certain thickness, insulation basically turns off the melting, allowing for the ice to be preserved and slowly move or flow down a valley at elevations and temperatures where clean ice may be completely melted."

To collect the information needed to map and characterize these hidden giants, Meng, Holt, other UArizona students and their collaborators hiked rugged mountain terrain in the western U.S., lugging computers, battery packs and radar antennas on their backs. They navigated steep landscapes with loose rocks ranging in size from grains of sand to houses.

"Standing on a debris-covered glacier is pretty surreal, because it's in this barren area on a mountainside, and each rock glacier seems to have its own personality," Meng said. "They each have a slightly different type of bedrock supplying debris, and the valley geometry dictates its shape and appearance."

Using two different antenna configurations, the researchers used ground-penetrating radar to measure both the radar wave speed and the angle at which the wave was reflected from the subsurface. In the same way that humans have two eyes to see in three dimensions, two antenna configurations allowed the researchers to better calculate the dimensions of the rock glacier. They also estimated the ratio of ice to rock at each survey location using radar wave velocity.

"In the process, we made the most precise estimates of rock glacier geometry and composition to date," Meng said.

From Earth to Mars

Understanding rock glaciers on Earth is important because they are essentially water reservoirs, Meng said.

"Our research gives us a better idea of the total water budget in mountainous regions, where major rivers have headwaters," he said. "Snow is a year-to-year accumulation that covers an entire landscape, whereas rock glaciers are a more localized but permanent water reservoir that actually stores water for what could be hundreds to a few thousand years."

"By having a map of the debris thickness and ice concentration, we can essentially characterize the ability of rock glaciers to withstand effects of a warming climate compared to clean ice glaciers," Meng said.

Other scientists also recognized rock glaciers on Mars by their wrinkled putty-like flow pattern, even before radar data detected them.

Martian rock glaciers are still not well understood, Meng said, but it is known that they are typically found between 30 and 60 degrees latitude in both of the planet's hemispheres and are much older than the Martian polar ice.

"These Martian rock glaciers are potential targets for water resources on Mars, too, because they're actually really large compared to the ones on Earth, like hundreds of meters thick," Meng said. "They're also more accessible than polar ice because spacecraft wouldn't have to change their orbits as much as they would if they were to land on a pole, which requires a lot more fuel to reach."

One of the big challenges for scientists is determining the thickness of the surface rock covering the glaciers on Mars. If there is 30 feet of rock and debris on rugged Martian terrain, then it might not be worth the trouble for astronauts to attempt to access the ice for water resources, Meng said.

"Our goal is to use these rock glaciers on Earth as an analog for processes on Mars," Meng said. "By mapping the patterns of debris thickness on Earth, we're trying to understand how that debris thickness may also vary on Mars. Also, by learning about the differences in flow parameters between clean ice and debris-rich ice, that will help simulations for the Martian case as well."