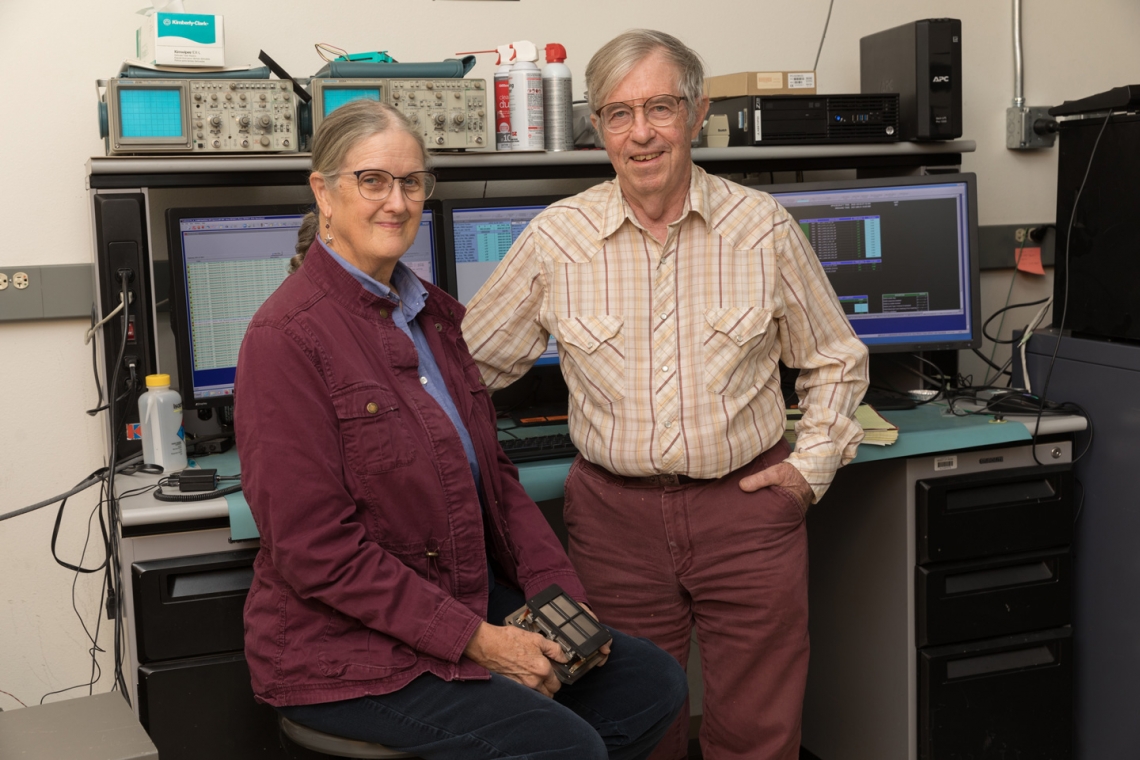 NASA is preparing to launch its most ambitious astronomical observatory, the James Webb Space Telescope, to an outpost four times farther away from the Earth than the moon. With their respective research teams, Marcia and George Rieke, both Regents Professors in the University of Arizona's Steward Observatory, have been instrumental in developing technology that will enable the telescope to peer deeper back in time and space than any instrument before it.

The husband-and-wife research team also helped the field of infrared astronomy, once a niche endeavor fraught with extreme technical challenges, flourish into a powerful discipline that has allowed us to see the universe in ways that were deemed impossible 50 years ago.

Ahead of the launch, now planned for no earlier than Dec. 24, Lo Que Pasa spoke with the Riekes about what they hope to see with Webb, and how they became first involved with studying the cosmos – and with each other.

Now that the James Webb Telescope is stowed away in a rocket nose cone, awaiting launch, it's probably fair to say no human being will ever again lay hands on the instruments you designed and built. How do you feel?

George: When NASA built Spitzer (a previous generation space telescope), I remember being ushered into a clean room and there were the three instruments, including mine, all mounted on the cryostat (the device that keeps the telescope cool enough for operation). And I said a little prayer to myself: "Please never let me see these again." Because, obviously, I thought if I saw them again, it meant there was a big problem.

What are you most excited about?

George: I'm excited for our teams of young researchers who are counting on JWST data to further their careers. They have spent years working with us to make this happen, and this is a big deal for them, especially after all these delays the project experienced, which can be demoralizing.

What are some of the science highlights that you're hoping to get with the James Webb Telescope?

George: We do not really understand the origin of quasars and active galactic nuclei, because some of them may be so hidden in dust that they just can't be found with current observatories. But they cannot hide from MIRI (the Mid-Infrared Instrument that George Rieke's group helped develop).

Marcia: I've always wanted to find the most distant galaxies and trace how galaxies changed from that epoch all the way down to the current times. My other goal is to look at the atmospheres of exoplanets and understand their composition.

George: JWST will only look a little bit further than we already have – with Hubble – BUT it will look much closer to the Big Bang. So, if you're counting from the Big Bang, it's going to get twice as close, rather than 5% further back than we have looked, and that is a very important distinction.

Marcia: On my optimistic days, I hope that we can see back to only 200 million years after the Big Bang.

Will Webb be able to look back to the time when we expect to see the very first galaxies, or were there galaxies even before that time?

George: No, that's the $10 billion question!

George: As far back as we've been able to look, everything still looks pretty darn familiar. There are galaxies, there are stars and, yes, compared to modern galaxies, these early galaxies have slightly different shapes. They're a little smaller, but all that is kind of "so what." By getting twice as close to the Big Bang, we're really pushing back to the time when things SHOULD look different. But we don't know HOW they're different. Who knows what we'll find.

Can you tell us a little bit about how you both got started at the University of Arizona?

Marcia: My first job out of graduate school was here at the university. I was working with George as a postdoc, and I've not ever left. He was assistant professor at the time I showed up. When I was doing my thesis research, George arranged for the telescope and detector package that I used and he helped me figure out how to use it, so he was quite important for getting my thesis done.

George: I was offered a job here at the university, and I took it because I thought that it would broaden my science if I got into this new field. Just to show you how simple things were in those days compared to today: I went observing with a postdoc who worked for Frank Low (late Regents Professor Emeritus who helped establish modern infrared astronomy) at the time. After spending three nights observing with him, I went to the same telescope to start my own observations, and Frank drew a little diagram of how to find the telescope and he wished me luck. He did not come along to check things out. It was that simple. I could take the instrument, a very crude instrument detecting infrared light at 10 microns, to the telescope, mount it, get it going and get data. And when he says "simple," think of a single pixel that measures how bright a circular spot on the sky is. Now that's OK if you're measuring something that's a simple point source, like a single star. But if you want to map something so that you can make it look like a photo, you have to measure a spot, move the telescope, measure another spot, move the telescope and so on. It's very tedious way to make a photo.

Why was it initially difficult for the field of infrared astronomy to gain acceptance?

Marcia: Because astronomers are skeptical of other wavelengths.

George: I'm going to put it more succinctly: Nobody liked us.

Marcia: Part of it was that most of the people who started out doing infrared astronomy were actually not astronomers. They were physicists like us. We speak a different language. In one of the early papers that we published together, we used a strange unit of energy, the "watt." (Laughing) Astronomers weren't used to that.

George: Science works by paradigms; there's a structure of thinking. Scientists have learned to be very suspicious of anything outside their paradigm, and so, when there's a totally new initiative, like infrared astronomy, the optical astronomers were automatically suspicious that there's something wrong with this.

You obviously are a very successful husband-and-wife research team. What are the challenges? What are the perks?

Marcia: (Laughing) Well, the perks are that we get to go on trips together.

George: We have a lot to talk about on business, we have less to talk about on other things so, you know, in some sense it's a little limiting. But in another sense, it is very expansive because we can talk in depth about the things we're both working on.

Marcia: We read each other's papers and grant proposals, we tend to share a lot, we run ideas past each other and so on.

What does a typical debate between the two of you look like?

Marcia: I will say, "You forgot that this fact is XYZ," and he'll say, 'Oh, but you're misinterpreting THAT fact.' (Both laugh.)

Marcia: I hope that we'll be in the big lecture hall at Steward Observatory, and that we'll have our teams there and watch on the big screen. Since the launch is at 5:20 in the morning, I suspect we'll do the celebrating a bit later. We're going to have such a collective sigh of relief when we see that rocket go up.

George: We're having an argument about that. I think we should bring Champagne, but Marcia thinks it's too early to drink. (Both laugh.)