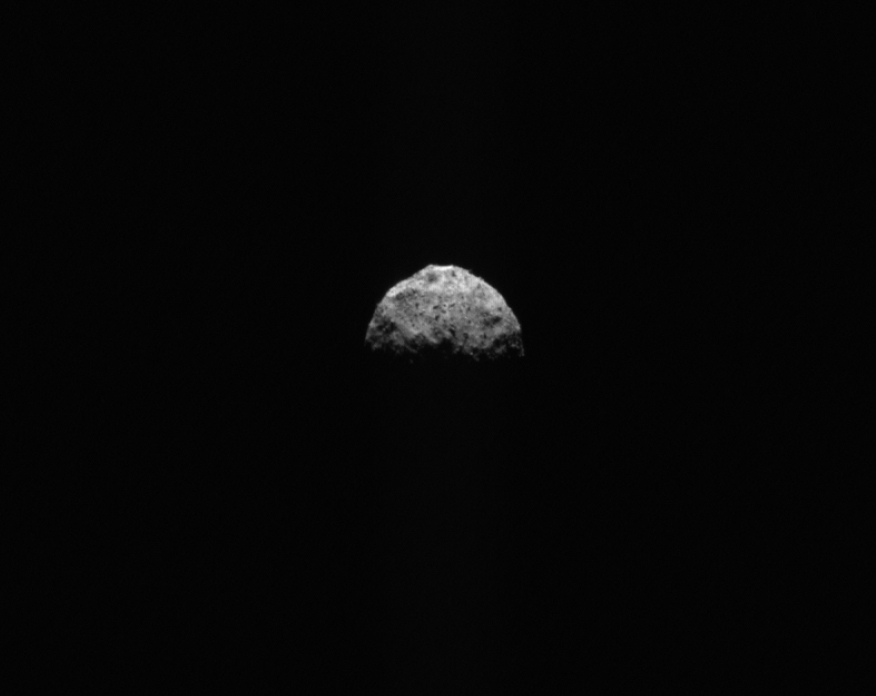 NASA's OSIRIS-REx spacecraft completed its last flyover of Bennu today at about 6 a.m. EDT, or 3 a.m. in Tucson, where the University of Arizona leads the mission. The mission team will have to wait a few more days to find out how the spacecraft changed the surface of Bennu when it grabbed a sample of the asteroid.

The OSIRIS-REx team added this flyby to document surface changes resulting from the touch-and-go, or TAG, sample collection maneuver on Oct. 20. The spacecraft is now slowly drifting away from the asteroid.

"By surveying the distribution of the excavated material around the TAG site, we will learn more about the nature of the surface and subsurface materials along with the mechanical properties of the asteroid," said mission principal investigator and UArizona planetary sciences professor Dante Lauretta. UArizona also leads the science team and the mission's science observation planning and data processing.

During the flyby, OSIRIS-REx imaged Bennu for 5.9 hours, covering more than a full rotation of the asteroid. It flew within 2.1 miles of Bennu's surface – the closest it has been since TAG.

It will take until at least April 13 for the spacecraft to downlink all of the data and new pictures of Bennu's surface recorded during the flyby. It shares the Deep Space Network antennae with other missions, such as Mars Perseverance, and typically gets four to six hours of downlink time per day.

"We collected about 4,000 megabytes of data during the flyby," said Mike Moreau, deputy project manager of OSIRIS-REx at NASA's Goddard Space Flight Center. "Bennu is approximately 185 million miles from Earth right now, which means we can only achieve a downlink data rate of 412 kilobits per second, so it will take several days to download all of the flyby data."

Once the mission team receives the images and other instrument data, it will study how OSIRIS-REx disturbed Bennu's surface. During touchdown, the spacecraft's sampling head sunk 1.6 feet into the asteroid's surface and simultaneously fired a pressurized charge of nitrogen gas. The spacecraft's thrusters kicked up a large amount of surface material during the back-away burn – launching rocks and dust in the process.

OSIRIS-REx, with its pristine and precious asteroid cargo, will remain in Bennu's vicinity until May 10, when it will fire its thrusters and begin its two-year cruise home. The mission will deliver the asteroid sample to Earth on Sept. 24, 2023.

NASA invites the public to watch OSIRIS-REx depart from Bennu on NASA.gov and NASA TV, on May 10 at 4 p.m. EDT.

For more information about this story and OSIRIS-REx visit: NASA - OSIRIS-REx