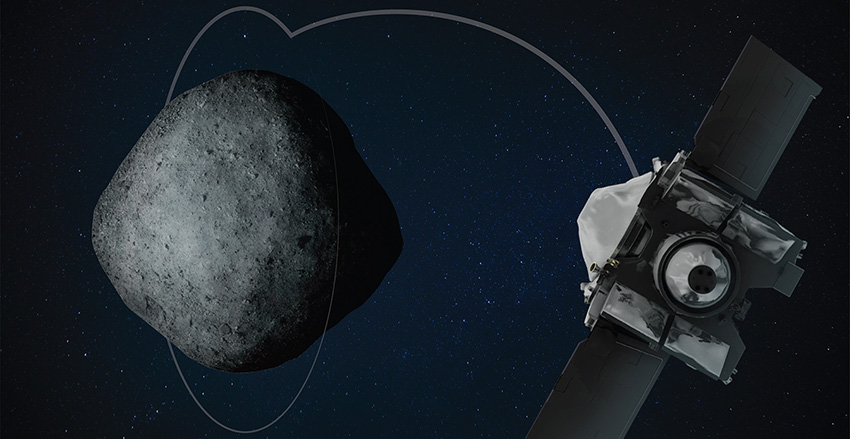 At 2:43 p.m. EST on December 31, while many on Earth prepared to welcome the New Year, NASA’s OSIRIS-REx spacecraft, 70 million miles (110 million kilometers) away, carried out a single, eight-second burn of its thrusters – and broke a space exploration record. The spacecraft entered into orbit around the asteroid Bennu, and made Bennu the smallest object ever to be orbited by a spacecraft.

“The team continued our long string of successes by executing the orbit-insertion maneuver perfectly,” said Dante Lauretta, OSIRIS-REx principal investigator at the University of Arizona, Tucson. “With the navigation campaign coming to an end, we are looking forward to the scientific mapping and sample site selection phase of the mission.”

Lauretta, along with his team, spent the last day of 2018 with his feet planted on Earth, but his mind focused on space. “Entering orbit around Bennu is an amazing accomplishment that our team has been planning for years,” Lauretta said.

Inching around the asteroid at a snail’s pace, OSIRIS-REx’s first orbit marks a leap for humankind. Never before has a spacecraft from Earth circled so close to such a small space object – one with barely enough gravity to keep a vehicle in a stable orbit.

Now, the spacecraft will circle Bennu about a mile (1.75 kilometers) from its center, closer than any other spacecraft has come to its celestial object of study. (Previously the closest orbit of a planetary body was in May 2016, when the Rosetta spacecraft orbited about four miles (seven kilometers) from the center of the comet 67P/Churyumov-Gerasimenko.) The comfortable distance is necessary to keep the spacecraft locked to Bennu, which has a gravity force only 5-millionths as strong as Earth’s. The spacecraft is scheduled to orbit Bennu through mid-February at a leisurely 62 hours per orbit.

Now that the OSIRIS-REx spacecraft is closer to Bennu, physical details about the asteroid will leap into sharper focus, and the spacecraft’s tour of this rubble pile of primordial debris will become increasingly detailed and focused.

“Our orbit design is highly dependent on Bennu’s physical properties, such as its mass and gravity field, which we didn’t know before we arrived,” said OSIRIS-REx’s flight dynamics system manager Mike Moreau, who is based at NASA’s Goddard Space Flight Center in Greenbelt, Maryland.

“Up until now, we had to account for a wide variety of possible scenarios in our computer simulations to make sure we could safely navigate the spacecraft so close to Bennu. As the team learned more about the asteroid, we incorporated new information to hone in on the final orbit design,” he said.

The simulations have played a critical role. The OSIRIS-REx mission, after all, was designed based on complex computer programs that predicted — quite accurately, as it turns out — the properties of Bennu and how the spacecraft’s trajectory would behave. This diligent preparation allowed the team to navigate the vehicle safely to Bennu in December and put some questions to rest (there are, indeed, signs of ancient water preserved in Bennu’s rocks) and to fly over its poles and equator in a preliminary survey that led to some surprises (Bennu has many large boulders).

Having completed the preliminary survey of Bennu with a flyby of its south pole on December 16, the spacecraft moved to a safe 31 miles (50 kilometers) away from the asteroid to give the navigation team a chance to regroup and prepare for orbit insertion. Next, Lockheed Martin engineers programmed the spacecraft to begin moving back to a position about nine miles (15 kilometers) over Bennu’s north pole to prepare for three burns of its thrusters over the course of 10 days that would place the spacecraft into orbit.

Even though OSIRIS-REx is in the most stable orbit possible, Bennu’s gravitational pull is so tenuous that keeping the spacecraft safe will require occasional adjustments, said Dan Wibben, OSIRIS-REx maneuver and trajectory design lead at KinetX Aerospace in Simi Valley, California.

“The gravity of Bennu is so small, forces like solar radiation and thermal pressure from Bennu’s surface become much more relevant and can push the spacecraft around in its orbit much more than if it were orbiting around Earth or Mars, where gravity is by far the most dominant force,” he said.

The OSIRIS-REx navigation team will use “trim” maneuvers to slightly thrust the spacecraft in one direction or another to correct its orbit and counter these small forces. If the spacecraft drifts away from Bennu, or some other problem forces it into safe mode, it has been programmed to fly away from the asteroid to stay safe from impact.

“It’s simple logic: always burn toward the Sun if something goes wrong,” said Coralie Adam, OSIRIS-REx lead optical navigation engineer at KinetX. Engineers can navigate the spacecraft back into orbit if it drifts away, Adam said, though that’s unlikely to happen.

The navigation and spacecraft operations teams are focused on the first orbital phase. Their primary goal is to transition away from star-based navigation, which allowed the team to locate the spacecraft based on pictures of the star formations around it taken by the cameras onboard. Navigators use methods like this since there is no GPS in deep space and we can’t see the spacecraft from Earth-based telescopes. From this point forward, though, the OSIRIS-REx team will rely on landmarks on Bennu’s surface to track OSIRIS-REx, a more precise technique that will ultimately guide them to a sample-collection site clear of boulders and large rocks, said Adam.

“After conducting a global imaging and mapping campaign during our recent preliminary survey phase, the science team has created 3-D models of Bennu’s terrain that we’re going to begin using for navigation around the asteroid,” she said.

Another critical objective of this orbital phase, Adam said, is to get a better handle on Bennu’s mass and gravity, features that will influence the planning of the rest of the mission, notably the short touchdown on the surface for sample collection in 2020. In the case of Bennu, scientists can only measure these features by getting OSIRIS-REx very close to the surface to see how its trajectory bends from Bennu’s gravitational pull.

“The Orbital A phase will help improve our detailed models for Bennu’s gravity field, thermal properties, orientation, and spin rate,” said Wibben. “This, in turn, will allow us to refine our trajectory designs for the even more challenging flight activities we will perform in 2019.”

The December 31 maneuver to place the spacecraft into orbit about Bennu is the first of many exciting navigation activities planned for the mission. The OSIRIS-REx team will resume science operations in late February. At that point, the spacecraft will perform a series of close flybys of Bennu for several months to take high-resolution images of every square inch of the asteroid to help select a sampling site. During the summer of 2020, the spacecraft will briefly touch the surface of Bennu to retrieve a sample. The OSIRIS-REx mission is scheduled to deliver the sample to Earth in September 2023.