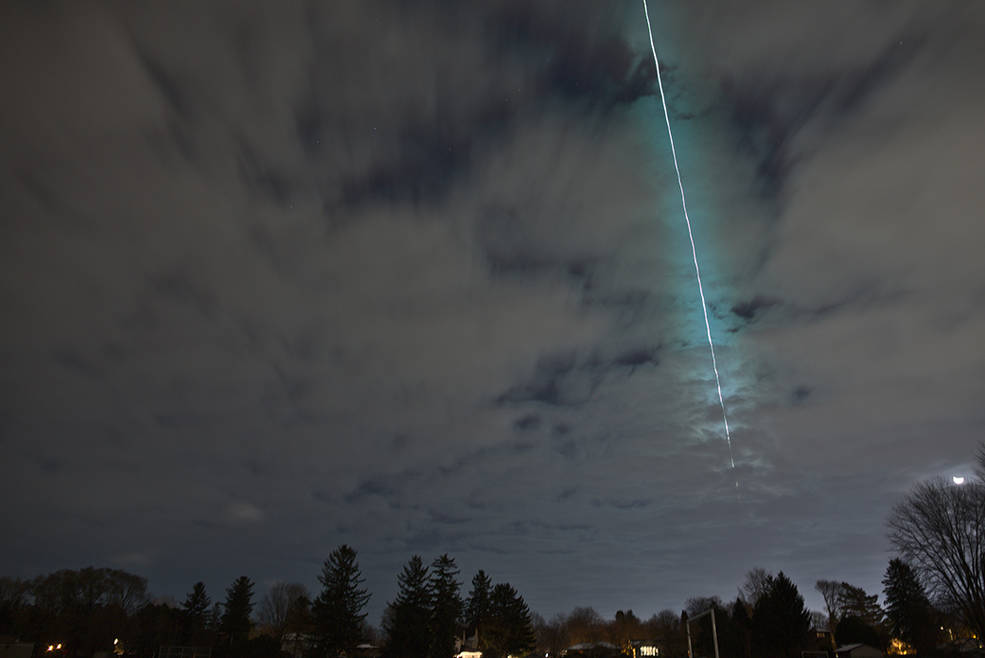 In the early hours of Saturday, Nov. 19, the skies over southern Ontario, Canada, lit up as a tiny asteroid harmlessly streaked across the sky high in Earth’s atmosphere, broke up, and likely scattered small meteorites over the southern coastline of Lake Ontario. The fireball wasn’t a surprise. Roughly 1 meter (3 feet) wide, the asteroid was detected 3 ½ hours before impact, making this event the sixth time in history a small asteroid has been tracked in space before impacting Earth’s atmosphere.

NASA is tasked with the detection and tracking of much larger near-Earth objects that could survive passage through Earth’s atmosphere and cause damage on the ground, but those objects can also be detected much further in advance than small ones like the asteroid that disintegrated over southern Ontario. Such small asteroids are not a hazard to Earth, but they can be a useful test for NASA’s planetary defense capabilities for discovery, tracking, orbit determination, and impact prediction.

“The planetary defense community really demonstrated their skill and readiness with their response to this short-warning event,” said Kelly Fast, Near-Earth Object Observations program manager for the Planetary Defense Coordination Office (PDCO) at NASA Headquarters in Washington. “Such harmless impacts become spontaneous real-world exercises and give us confidence that NASA’s planetary defense systems are capable of informing the response to the potential for a serious impact by a larger object.”

The asteroid was discovered by NASA-funded Catalina Sky Survey, which is headquartered at the University of Arizona in Tucson, on the evening of Nov. 18 during routine search operations for near-Earth objects. The observations were quickly reported to the Minor Planet Center (MPC) – the internationally recognized clearinghouse for the position measurements of small celestial bodies – and the data was then automatically posted to the Near-Earth Object Confirmation Page.

NASA’s Scout impact hazard assessment system, which is maintained by the Center for Near Earth Object Studies (CNEOS) at the agency’s Jet Propulsion Laboratory in Southern California, automatically fetched the new data from that page and began calculating the object’s possible trajectory and chances of impact. CNEOS calculates every known near-Earth asteroid orbit to provide assessments of potential impact hazards in support of NASA’s PDCO.

Seven minutes after the asteroid was posted on the confirmation page, Scout had determined it had a 25% probability of hitting Earth’s atmosphere, with possible impact locations stretching from the Atlantic Ocean off the East Coast of North America to Mexico. More observations were then provided by the astronomical community, including amateur astronomers in Kansas, to better refine the asteroid’s trajectory and possible impact location.

“Small objects such as this one can only be detected when they are very close to Earth, so if they are headed for an impact, time is of the essence to collect as many observations as possible,” said Shantanu Naidu, navigation engineer and Scout operator at JPL. “This object was discovered early enough that the planetary defense community could provide more observations, which Scout then used to confirm the impact and predict where and when the asteroid was going to hit.”

As Catalina continued to track the asteroid over the next few hours, Scout used this new data to continually update the asteroid’s trajectory and the system’s assessment of the chance of impact, posting those results on the hazard-assessment system’s webpage.

Many astronomers check the Scout webpage throughout the night to determine the most important asteroids to track. A group of amateur astronomers at Farpoint Observatory in Eskridge, Kansas, tracked the asteroid for more than an hour, providing critical additional data that enabled Scout to confirm a 100% impact probability and determine the expected location of atmospheric entry as being over southern Ontario at 3:27 a.m. EST (12:27 a.m. PST) Nov. 19. With more than two hours remaining before impact, there was time to alert scientists in southwestern Ontario of the bright fireball that would occur.

A total of 46 observations of the asteroid’s position were ultimately collected, the final one being made only 32 minutes before impact by the University of Hawaii 88-inch (2.2-meter) telescope on Mauna Kea.

As predicted, at 3:27 a.m. EST (12:27 a.m. PST), the asteroid streaked through Earth’s atmosphere at a shallow angle and broke up, likely producing a shower of small meteorites and leaving no reported damage on the surface. After this harmless disintegration, the Minor Planet Center designated the asteroid 2022 WJ1 to acknowledge its discovery while still in space.

Dozens of sightings were reported to the American Meteor Society, and scientists who were alerted to the Scout prediction were able to photograph the asteroid’s atmospheric entry. Videos of the fireball collected by the public were also posted online. NASA’s Meteorite Falls website also reported weather radar detections of fragments of the fireball falling as meteorites at the predicted time over Lake Ontario. Small meteorites might be found east of the town of Grimsby while larger meteorites might be nearer the town of McNab.

The first asteroid to be discovered and tracked well before hitting Earth was 2008 TC3, which entered the atmosphere over Sudan and broke up in October 2008. That 13-foot-wide (4-meter-sized) asteroid scattered hundreds of small meteorites over the Nubian Desert. Earlier this year, asteroid 2022 EB5 entered the atmosphere over the Norwegian Sea after Scout accurately predicted its location, becoming the fifth object to be detected before impact. As surveys become more sophisticated and sensitive, more of these harmless objects are being detected before entering the atmosphere, providing real exercises for NASA’s planetary defense program.