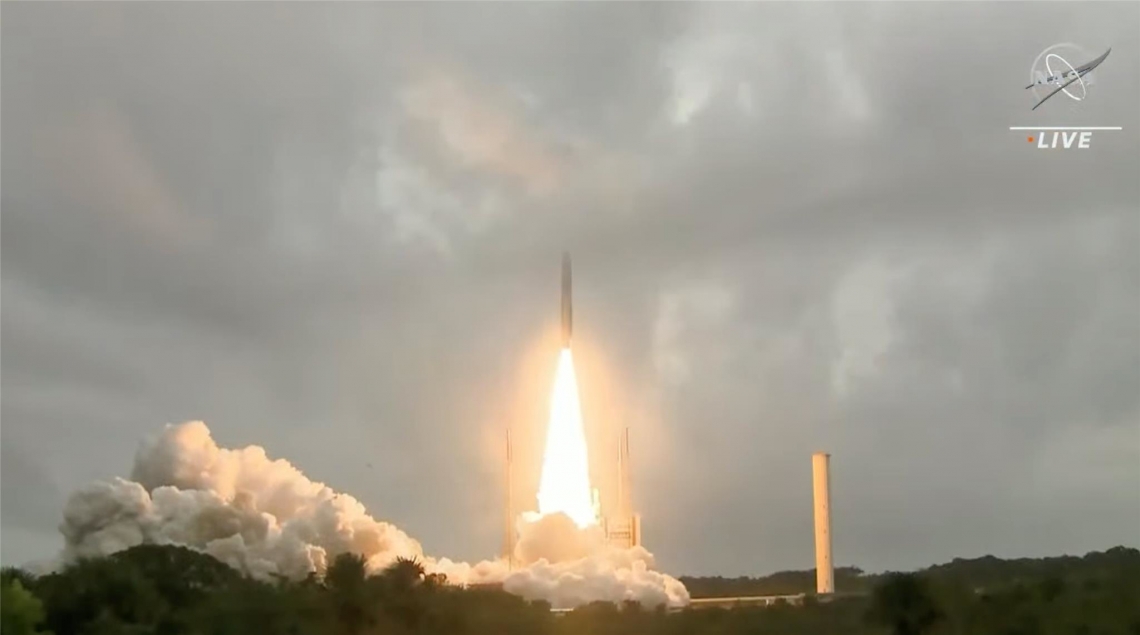 On Dec. 25 at 5:20 a.m. (MST), the Ariane 5 rocket roared into the sky from its launchpad in Kourou, French Guiana, with the James Webb Space Telescope safely stowed inside. The successful launch marked the beginning of the telescope's monthlong journey to its new home, which is four times farther away from Earth than the moon. If all goes smoothly, a new era in space observation will begin.

Webb is NASA's top science priority and involved decades of work by thousands of scientists, engineers, and managers in the U.S., Canada and Europe. University of Arizona astronomers played key roles in designing and developing the telescope's infrared eyes, which will allow it to peer deeper into the cosmos than ever before and collect light from the earliest stars and galaxies, nebulous stellar nurseries, planetary atmospheres, and more.

Webb's Near-Infrared Camera, or NIRCam, is one of the most sensitive infrared cameras ever built and will serve as the telescope's primary imager. UArizona Regents Professor of Astronomy Marcia Rieke, principal investigator for NIRCam, led the development of the instrument that Lockheed Martin's Advanced Technology Center built, designed and tested.

George Rieke, Marcia's husband and also a Regents Professor of Astronomy at UArizona's Steward Observatory, is the science team lead for the Mid-Infrared Instrument, or MIRI, built by a consortium of European scientists and engineers and NASA's Jet Propulsion Laboratory. The instrument was added to Webb to expand the telescope's reach even farther into the infrared spectrum.

Infrared astronomy was once a niche endeavor fraught with extreme technical challenges. The Riekes helped the field of flourish into a powerful discipline that has allowed scientists to see the universe in ways that were deemed impossible 50 years ago.

"Never did I imagine that I would be searching for distant galaxies as I started out in infrared astronomy by observing bright red stars," Marcia said.

"Infrared astronomy started here in the 1960s, and it has been an exciting ride all the way to the revolutionary capabilities of the Webb Telescope," George said.

Two other instruments, supplied by the European and Canadian space agencies, round out Webb's scientific package.

"It's incredibly exciting to have a successful launch," said Buell Jannuzi, astronomy department head and director of Steward Observatory. "I am so happy for everyone who made this possible and am looking forward to the science that will come from everyone's hard work in the months ahead."

Webb must travel for a month to reach its target location. During the trip, many precise unfoldings and adjustments will have to be perfectly executed to ensure proper functioning of the telescope. There will be no fixing it once it has arrived at its destination.

A telescope's image clarity is determined by the size of its mirror compared to the wavelength of light it's collecting. Infrared light has longer wavelengths than visible light, so a larger mirror is needed to produce quality images. Webb's primary mirror is over two stories tall and the sunshields that protect it from the heat of the sun, Earth and moon are as long as a tennis court.

Thrusting such a large and expensive piece of equipment into space can be full of challenges, even on a rocket as large as the Ariane 5. NASA's trick? Fold the telescope so it fits into the nose of the rocket and unfurl it in space.

Within 24 hours of Ariane 5's launch, Webb will pass the moon. About three days post-launch, its sunshields will begin to unfurl. Other mechanisms will shift and separate before the sunshields reach their full length. The temperature of the membrane closest to the sun will be nearly as hot as the boiling point of water, but the layers of sunshield membranes, each as thin as a human hair, will cool the telescope to nearly 400 degrees below zero – cold enough to liquify air.

Twenty-nine days after launch, controllers on Earth can fire thrusters to accurately park Webb in its final orbit. Unlike the Hubble Space Telescope, which orbits Earth, Webb will orbit the sun. Webb's orbit lets it fly in formation with Earth, making it possible for the telescope to radio data back to the researchers on the ground.

Once sufficiently cooled, NIRCam can begin its first order of business – precisely aligning the mirror segments so they work as a unit. NIRCam will sense incoming infrared light as a wavefront – an ideally perfect sphere of light particles emitted from a luminescent object. When those particles encounter another object – in this case, the telescope's optics – they become distorted. NIRCam measures those distortions on a nanometer scale, and that data is used to advise how Webb's mirrors must adjust. This process continues until the telescope's mirrors are properly aligned and is critical to ensuring Webb provides crystal clear images.

About 180 days after launch, scientific observations can begin. NASA has allotted observing time to scientists around the world, with 13% of the total observing time awarded to two UArizona instrument teams and other UArizona astronomers. This gives the university more viewing time than any other astronomy center in the world.

NIRCam was conceived to carry out Webb's original purpose: to discover what astronomers refer to as "first light" galaxies at the moment of their formation in the very early universe.

"We can currently see galaxies back to 500 to 600 million years post-Big Bang, nearly 13 billion years ago," Marcia said. "I've always wanted to find the most distant galaxies and trace how galaxies changed from that epoch all the way down to the current times. My other goal is to look at the atmospheres of exoplanets and understand their composition."

While Webb will only look a bit farther than we already can see with Hubble, it will look much closer to the Big Bang, George said.

"If you're counting from the Big Bang, it's going to get twice as close, rather than 5% further back than we have looked," he said, "and that is a very important distinction."

George – along with postdoctoral research associates Jianwei Lyu and Michael Florian and assistant research professors Stacey Alberts and Irene Shivaei – is looking forward to understanding the origin of quasars and active galactic nuclei.

"Some of them may be so hidden in dust that they just can't be found with current observatories," he said. "But they cannot hide from Webb and its super-sensitive Mid-Infrared Instrument."