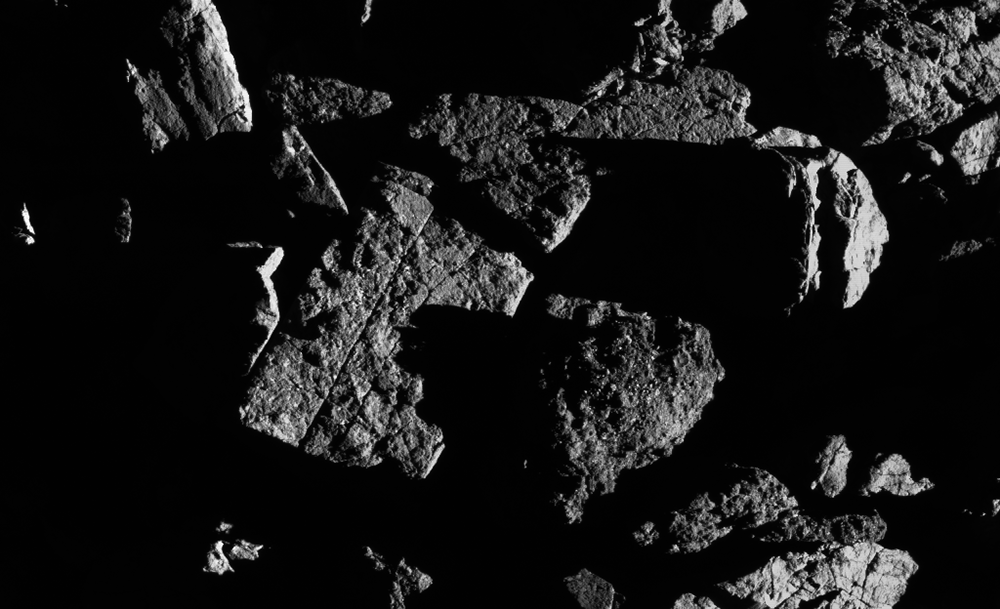 Asteroids don't just sit there doing nothing as they orbit the sun. They get bombarded by meteoroids, blasted by space radiation and now, for the first time, scientists are seeing evidence that even a little sunshine can wear them down.

Rocks on asteroid Bennu appear to be cracking as sunlight heats them up during the day and they cool down at night, according to images from NASA's OSIRIS-REx spacecraft.

"This is the first time evidence for this process, called thermal fracturing, has been definitively observed on an object without an atmosphere," said University of Arizona alumna Jamie Molaro of the Planetary Science Institute and lead author of a paper in Nature Communications. "It is one piece of a puzzle that tells us what the surface used to be like, and what it will be like millions of years from now."

"Like any weathering process, thermal fracturing causes the evolution of boulders and planetary surfaces over time – from changing the shape and size of individual boulders, to producing pebbles or fine-grained regolith, to breaking down crater walls," said OSIRIS-REx principal investigator Dante Lauretta of the University of Arizona. "How quickly this occurs relative to other weathering processes tells us how and how quickly the surface has changed."

Rocks expand when sunlight heats them during the day and contract as they cool down at night, causing stress that forms cracks that grow slowly over time. Scientists have thought for a while that thermal fracturing could be an important weathering process on airless objects like asteroids because many experience extreme temperature differences between day and night, compounding the stress. For example, daytime highs on Bennu can reach almost 127 degrees Celsius, or about 260 degrees Fahrenheit, and nighttime lows plummet to about minus 73 degrees Celsius, or nearly minus 100 degrees Fahrenheit. However, many of the telltale features of thermal fracturing are small, and before OSIRIS-REx got close to Bennu, the high-resolution imagery required to confirm thermal fracturing on asteroids didn't exist.

The mission team found features consistent with thermal fracturing using the spacecraft's OSIRIS-REx Camera Suite, which can see features on Bennu smaller than one centimeter, or almost 0.4 inches. It found evidence of exfoliation, where thermal fracturing likely caused small, thin layers – between 1 and 10 centimeters – to flake off of boulder surfaces. The spacecraft also produced images of cracks running through boulders in a north-south direction, along the line of stress that would be produced by thermal fracturing on Bennu.

Other weathering processes can produce similar features, but the team's analysis ruled them out. For example, rain and chemical activity can produce exfoliation, but Bennu has no atmosphere to produce rain. Rocks squeezed by tectonic activity can also exfoliate, but Bennu is too small for such activity. Meteoroid impacts do occur on Bennu and can certainly crack rocks, but they would not cause the even erosion of layers from boulder surfaces that were seen. Also, there's no sign of impact craters where the exfoliation is occurring.

Additional studies of Bennu could help determine how rapidly thermal fracturing is wearing down the asteroid, and how it compares to other weathering processes.

"We don't have good constraints yet on breakdown rates from thermal fracturing, but we can get them now that we can actually observe it for the first time in situ," said OSIRIS-REx project scientist Jason Dworkin of NASA's Goddard Space Flight Center in Greenbelt, Maryland. "Laboratory measurements on the properties of the samples returned by the spacecraft in 2023 will help us learn more about how this process works."

Another area of research is how thermal fracturing affects our ability to estimate the age of surfaces. In general, the more weathered a surface is, the older it is. For example, a region with a lot of craters is likely to be older than an area with few craters, assuming impacts happen at a relatively constant rate across an object. However, additional weathering from thermal fracturing could complicate an age estimate, because thermal fracturing is going to happen at a different rate on different bodies, depending on things like their distance from the sun, the length of their day and the composition, structure and strength of their rocks. On bodies where thermal fracturing is efficient, it may cause crater walls to break down and erode faster. This would make the surface look older according to the cratering record, when in fact it is actually younger. Or the opposite could occur. More research on thermal fracturing on different bodies is needed to start to get a handle on this, Molaro said.

The research was funded by NASA's OSIRIS-REx Participating Scientist program as well as the OSIRIS-REx asteroid sample return mission. NASA's Goddard Space Flight Center in Greenbelt, Maryland, provides overall mission management, systems engineering, and the safety and mission assurance for OSIRIS-REx. The University of Arizona  leads the science team and the mission's science observation planning and data processing. Lockheed Martin Space in Denver built the spacecraft and is providing flight operations. Goddard and KinetX Aerospace are responsible for navigating the OSIRIS-REx spacecraft. OSIRIS-REx is the third mission in NASA's New Frontiers Program, which is managed by NASA's Marshall Space Flight Center in Huntsville, Alabama, for the agency's Science Mission Directorate in Washington.