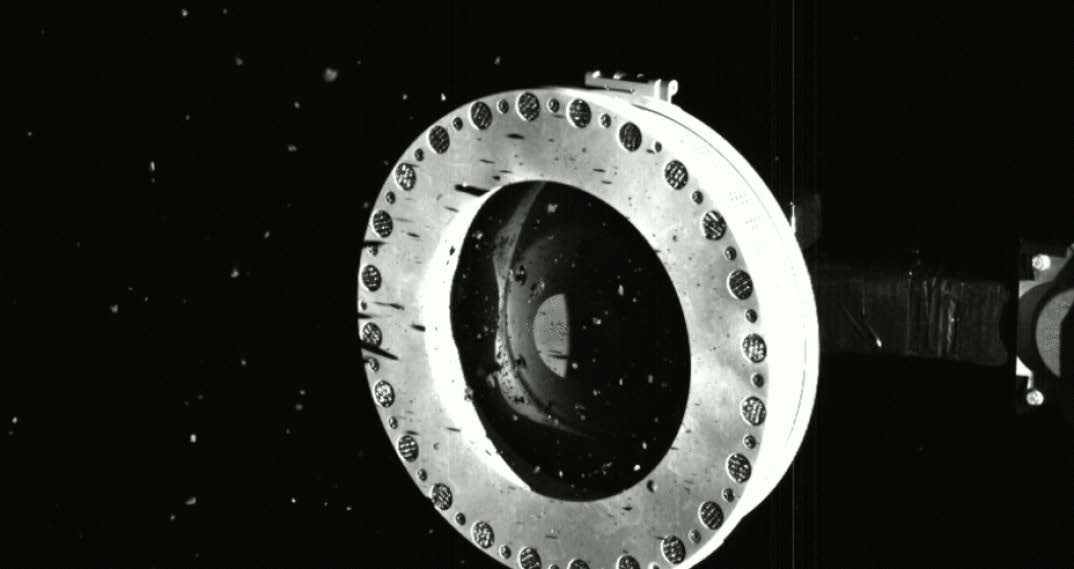 Two days after touching down on asteroid Bennu, NASA's University of Arizona-led OSIRIS-REx mission team received images confirming that the spacecraft has collected more than enough material to meet one of its main mission requirements – acquiring at least 2 ounces, or 60 grams, of the asteroid's surface material.

The spacecraft captured images of the sample collector head as it moved through several different positions. In reviewing these images, the OSIRIS-REx team noticed both that the head appeared to be full of asteroid particles, and that some of these particles appeared to be escaping slowly from the sample collector, called the Touch-And-Go Sample Acquisition Mechanism, or TAGSAM, head. They suspect bits of material are passing through small gaps where a mylar flap – the collector's lid – is slightly wedged open by larger rocks.

"It's been another set of surprising days on the OSIRIS-REx mission," said principal investigator Dante Lauretta, a UArizona professor in the Lunar and Planetary Laboratory. "This is the mission that keeps on surprising us."

The original plan was to weigh the sample by spinning the spacecraft in the coming weeks, but images of the sample head indicate that more than enough sample was collected on Wednesday's Touch-And-Go, or TAG sample collection maneuver.

"Although we may have to move more quickly to stow the sample, it's not a bad problem to have. We are so excited to see what appears to be an abundant sample that will inspire science for decades beyond this historic moment," said Thomas Zurbuchen, NASA's associate administrator for science at the agency's headquarters in Washington, D.C.

The team believes it has collected a sufficient sample and is on a path to stow the sample as quickly as possible. The team came to this conclusion after comparing images of the empty collector head with Oct. 22 images of the TAGSAM head after the sample collection event on Oct. 21.

The images also show that any spacecraft or TAGSAM instrument movement may lead to further sample loss. To preserve the remaining material, the mission team decided to forgo the sample mass measurement activity originally scheduled for Oct. 24, and canceled a braking burn scheduled for Friday.

From here, the OSIRIS-REx team will focus on stowing the sample in the sample return capsule, where any loose material will be kept safe during the spacecraft's journey back to Earth.

"We are working to keep up with our own success here, and my job is to safely return as large a sample of Bennu as possible," Lauretta said. "The loss of mass is of concern to me, so I'm strongly encouraging the team to stow this precious sample as quickly as possible."

The OSIRIS-REx spacecraft remains in good condition, and the mission team is finalizing a timeline for sample storage. An update will be provided once a decision is made on the sample storage timing and procedures.

NASA's Goddard Space Flight Center in Greenbelt, Maryland, provides overall mission management, systems engineering and the safety and mission assurance for OSIRIS-REx. Lockheed Martin Space in Denver built the spacecraft and is providing flight operations. Goddard and KinetX Aerospace of Tempe, Arizona, are responsible for navigating the OSIRIS-REx spacecraft. OSIRIS-REx is the third mission in NASA's New Frontiers Program, which is managed by NASA's Marshall Space Flight Center in Huntsville, Alabama, for the agency's Science Mission Directorate in Washington.