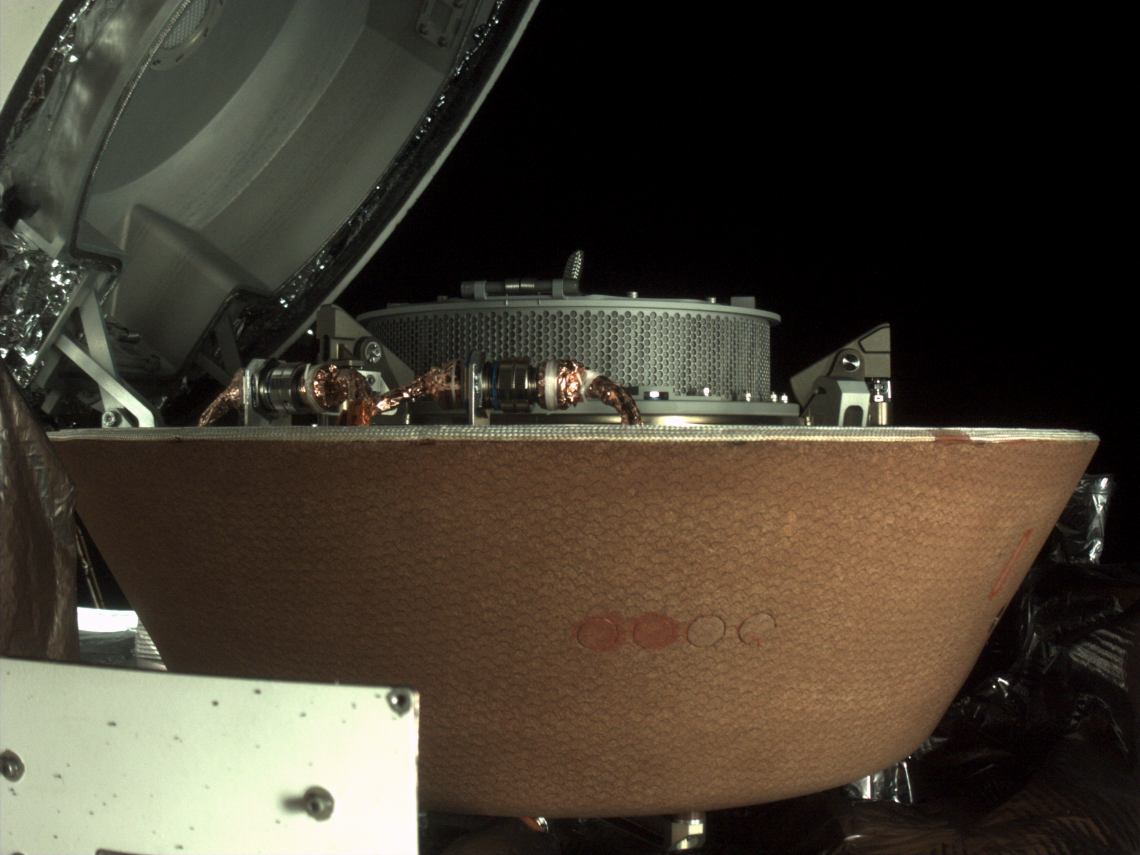 NASA's University of Arizona-led OSIRIS-REx mission has successfully stowed the spacecraft's Sample Return Capsule and its abundant sample of asteroid Bennu. On Oct. 28, the mission team sent commands to the spacecraft, instructing it to close the capsule – marking the end of one of the most challenging phases of the mission.

"I'm very thankful that our team worked so hard to get this sample stowed as quickly as they did,” said Dante Lauretta, OSIRIS-REx principal investigator and a professor of lunar and planetary sciences at the University of Arizona. "Now, we can look forward to receiving the sample here on Earth and opening up that capsule."

"This achievement by OSIRIS-REx on behalf of NASA and the world has lifted our vision to the higher things we can achieve together, as teams and nations," said NASA Administrator Jim Bridenstine. "Together, a team comprising industry, academia and international partners, and a talented and diverse team of NASA employees with all types of expertise, has put us on course to vastly increase our collection on Earth of samples from space. Samples like this are going to transform what we know about our universe and ourselves, which is at the base of all NASA's endeavors."

The mission team spent two days working around the clock to carry out the stowage procedure, with preparations for the stowage event beginning Oct. 24. The process to stow the sample is unique compared to other spacecraft operations and required the team's continuous oversight and input over the two-day period. For the spacecraft to proceed with each step in the stowage sequence, the team had to assess images and telemetry from the previous step to confirm the operation was successful and the spacecraft was ready to continue. Given that OSIRIS-REx is currently more than 205 million miles from Earth, this required the team to also work with a greater than 18.5-minute time delay for signals traveling in each direction.

Throughout the process, the OSIRIS-REx team continually assessed the Touch-And-Go Sample Acquisition Mechanism's wrist alignment to ensure the collector head was being placed properly into the Sample Return Capsule. Additionally, the team inspected images to observe any material escaping from the collector head to confirm that no particles would hinder the stowage process. StowCam images of the stowage sequence show that a few particles escaped during the stowage procedure, but the team is confident that a plentiful amount of material remains inside of the head.

"Given the complexity of the process to place the sample collector head onto the capture ring, we expected that it would take a few attempts to get it in the perfect position," said Rich Burns, OSIRIS-REx project manager at NASA's Goddard Space Flight Center in Greenbelt, Maryland. "Fortunately, the head was captured on the first try, which allowed us to expeditiously execute the stow procedure."

By the evening of Oct. 27, the spacecraft's Touch-And-Go Sample Acquisition Mechanism, or TAGSAM, arm had placed the collector head into the Sample Return Capsule. The following morning, the OSIRIS-REx team verified that the collector head was thoroughly fastened into the capsule by performing a "backout check." This sequence commanded the TAGSAM arm to attempt to back out of the capsule – which tugged on the collector head and ensured the latches are well secured.

"I want to thank the OSIRIS-REx team from the University of Arizona, NASA Goddard, Lockheed Martin, and their partners, and also especially the SCaN and Deep Space Network people at NASA and JPL, who worked tirelessly to get us the bandwidth we needed to achieve this milestone, early and while still hundreds of millions of miles away," said Thomas Zurbuchen, NASA's associate administrator for science at the agency's headquarters in Washington, D.C. "What we have done is a real first for NASA, and we will benefit for decades by what we have been able to achieve at Bennu."

On the afternoon of Oct. 28, following the backout check, the mission team sent commands to disconnect the two mechanical parts on the TAGSAM arm that connect the sampler head to the arm. The spacecraft first cut the tube that carried the nitrogen gas that stirred up the sample through the TAGSAM head during sample collection, and then separated the collector head from the TAGSAM arm itself.

That evening, the spacecraft completed the final step of the sample stowage process  –closing the Sample Return Capsule. To secure the capsule, the spacecraft closed the lid and then fastened two internal latches. As of late Oct. 28, the sample of Bennu is safely stored and ready for its journey to Earth.

The stowage process, originally scheduled to begin in early November, was expedited after sample collection when the mission team received images that showed the spacecraft's collector head overflowing with material. The images indicated that the spacecraft collected well over 2 ounces, or 60 grams, of Bennu's surface material, and that some of these particles appeared to be slowly escaping from the head. A mylar flap designed to keep the sample inside the head appeared to be wedged open by some larger rocks. Now that the head is secure inside the Sample Return Capsule, pieces of the sample will no longer be lost.

The OSIRIS-REx team will now focus on preparing the spacecraft for the next phase of the mission – Earth Return Cruise. The departure window opens in March 2021 for OSIRIS-REx to begin its voyage home, and the spacecraft is targeting delivery of the Sample Return Capsule to Earth on Sep. 24, 2023.

Goddard provides overall mission management, systems engineering and the safety and mission assurance for OSIRIS-REx. Lauretta of the University of Arizona is the principal investigator, and the University of Arizona also leads the science team and the mission's science observation planning and data processing. Lockheed Martin Space in Littleton, Colorado, built the spacecraft and provides flight operations. Goddard and KinetX Aerospace are responsible for navigating the OSIRIS-REx spacecraft. OSIRIS-REx is the third mission in NASA's New Frontiers Program, which is managed by NASA's Marshall Space Flight Center in Huntsville, Alabama, for the agency's Science Mission Directorate in Washington.

Where Rocks Come Alive: OSIRIS-REx Observes an Asteroid in Action