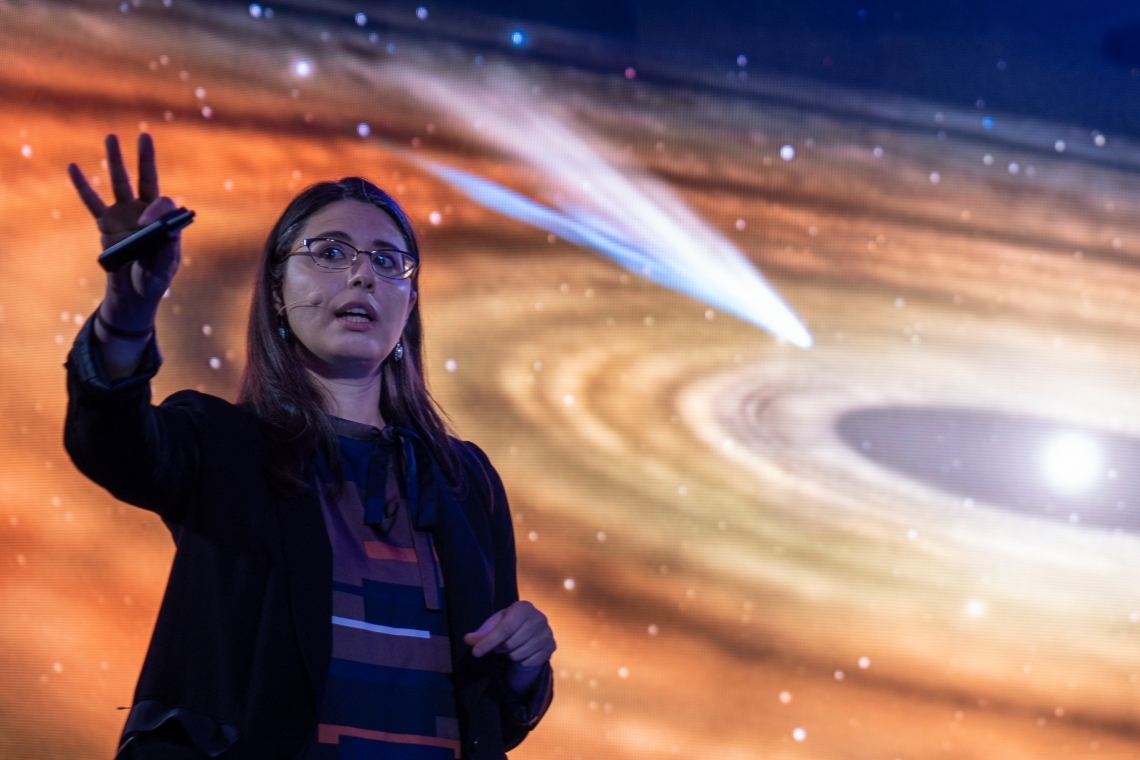 The University of Arizona's Daniella "Dani" DellaGiustina shot for the stars and has already landed among them. Today, the planetary scientist was named one of Popular Science's Brilliant 10 – an annual list of early-career scientists and engineers who are developing innovative approaches to problems across a range of disciplines.

DellaGiustina was chosen from hundreds of researchers across a variety of institutions.

Popular Science says its list aims to recognize the hard work, creativity and potential of those who are shaking up old modes of thinking, defining new disciplines and laying the groundwork for tomorrow's most groundbreaking research.

"For the Brilliant 10, we look for innovative thinkers and leaders whose work stands to reshape our understanding of our world. The insights Daniella's work will glean from asteroids will do just that," said Popular Science Editor-in-Chief Corinne Iozzio. "When Apophis makes its loop around Earth in 2029, the work she's prepping now will ensure we learn everything we can about our past, present and future as we possibly can."

"Dr. DellaGiustina is a brilliant planetary scientist whose work on the OSIRIS-REx and OSIRIS-APEX missions is expanding our knowledge of the makeup of asteroids and is laying the foundation for groundbreaking discoveries about the evolution of our solar system," said Carmala Garzione, dean of the College of Science. "Her journey through her education and career is inspirational and will support the next generation of female and Latina scientists. We are proud to have Dr. DellaGiustina representing our science community in Southern Arizona."

DellaGiustina is interested in water distribution throughout the solar system and how scientists can establish water's presence on different planetary bodies.

"Over the last year, I've been enamored with the scientific questions to establish how water got to the early Earth billions of years ago," DellaGiustina said. "I'm also interested in understanding the interiors of asteroids, moons and planets, because it's so difficult to do. We only have indirect measurements and techniques at our disposal, so we must pair those measurements with good assumptions to fully interpret the data. I enjoy that challenge."

DellaGiustina develops and deploys remote-sensing instruments to learn more about the surface and interior structure of small airless worlds, including asteroids and the moons of the outer solar system, where liquid oceans could be lurking beneath ice sheets.

She tests her technology in places like Greenland, which has a landscape similar to the planetary bodies she studies. Over the summer, she spent several weeks testing instruments at a lake beneath a glacier in northwest Greenland, where half a mile of ice overlays about 30 feet of salty water, providing a similar landscape to what is expected on Jupiter's moon Europa.

Following the water has also taken her to asteroid Bennu, from which the OSIRIS-REx spacecraft collected a sample in 2020 that will be returned to Earth in 2023. Bennu contained evidence of water in its past, and so drew scientific attention. After the OSIRIS-REx spacecraft jettisons its sample return capsule over the Utah desert in September 2023, the spacecraft will fly on to study Apophis, thanks to a $200 million mission extension by NASA that DellaGiustina will lead. The goal of the OSIRIS-APEX extended mission is to understand what lies just beneath the surface of asteroid Apophis. Researchers also want to understand how Apophis will be physically affected by the gravitational pull of Earth when the asteroid make a close approach to the planet in 2029.

DellaGiustina, 36, has rocketed from student to principal investigator in a short period of time. She said that what motivates her is her love of discovery.

"I get obsessed with scientific questions and like treating them like giant puzzles," DellaGiustina said. "I also just love being the first person to see the first image of a planetary surface, or the first to discover what is at the base of an ice sheet. I'm hooked on that feeling."

Her career began to bud at the UArizona Lunar and Planetary Laboratory when she an undergraduate in the Arizona Space Grant program, studying meteorites with professor Dante Lauretta, who would become principal investigator for OSIRIS-REx.

Her work led to a student experiment on the Phase A Discovery OSIRIS Mission, which was a precursor to OSIRIS-REx that ultimately was not selected by NASA for spaceflight but paved the way for the OSIRIS-REx mission. She developed an experiment to measure the ability of asteroids to provide radiation shielding for future manned missions to Mars.

In graduate school, DellaGiustina combined remote observations of Earth's ice sheets with modeling techniques to understand how ice flow will respond to a changing climate. She now uses her knowledge of Earth's permanently frozen regions to perform field studies in Earth landscapes similar to icy bodies in the solar system.

In 2012, DellaGiustina became a research scientist in the UArizona Department of Physics, and she transitioned back to planetary sciences in early 2014. She led the OSIRIS-REx image processing team from 2015 to 2021 before becoming deputy principal investigator of the mission in 2021. In addition to her other roles, she teaches a course about asteroids and comets to undergraduate and graduate students.

"Being recognized as one of the Brilliant 10 is really rewarding because I am a Latina who has not taken a traditional path through my career," DellaGiustina said.

She put the pursuit of her doctoral degree on the backburner while she worked for a while to figure out exactly what she wanted to study — eventually settling on seismology. She finished her doctorate while working full time as a scientist, graduating the same semester she wrote the proposal that would lead to her appointment as the OSIRIS-APEX principal investigator. At the same time, she was growing a spaceflight seismometer instrument program at UArizona, called the Seismometer to Investigate Ice and Ocean Structure. The program develops instruments needed to support missions to icy bodies in the outer solar system that could provide a sneak peek into the interiors of other worlds.

"It's been a little bit of a gamble to do things in the way I have," DellaGiustina said, "so it's nice to get external recognition that the work I'm doing is impactful."