Plumes on Icy Worlds Hold Clues About What Lies Beneath 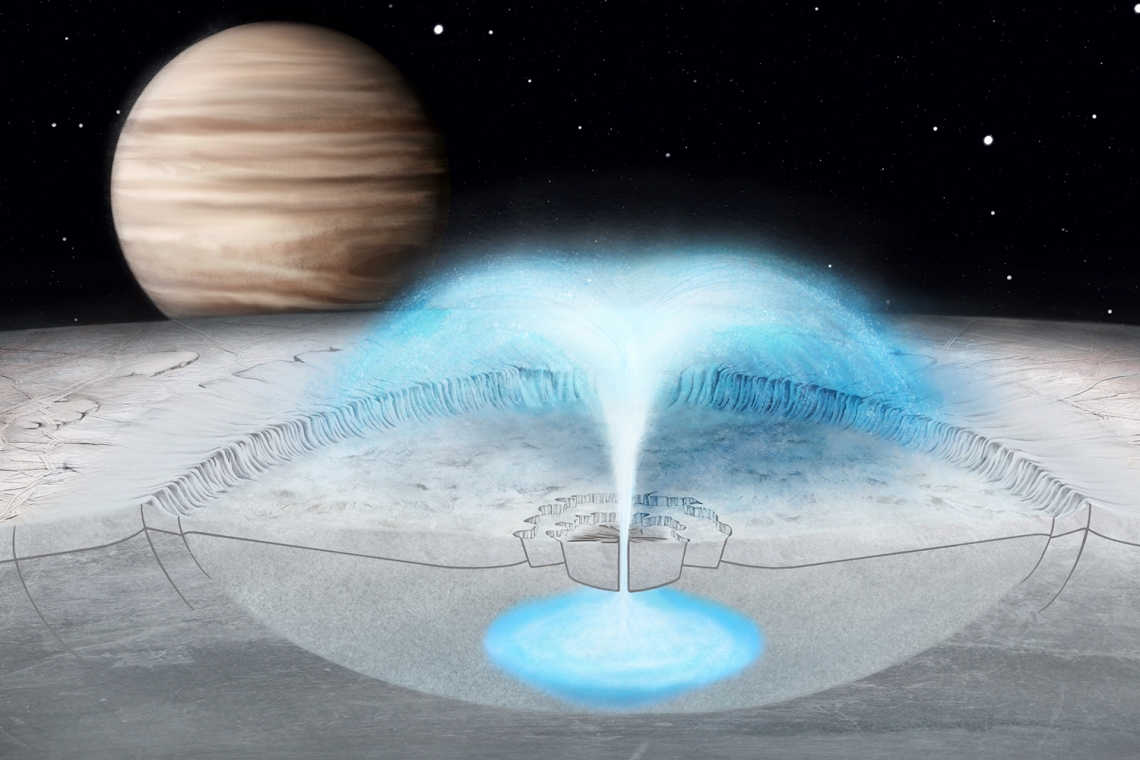 On Jupiter's icy moon Europa, powerful eruptions may spew into space, raising questions among hopeful astrobiologists on Earth: What would blast out from miles-high plumes? Could they contain signs of extraterrestrial life? And where in Europa would they originate? A new explanation points to a source closer to the frozen surface than might be expected.

Rather than originating from deep within Europa's oceans, some eruptions may originate from water pockets embedded in the icy shell itself, according to new evidence from researchers at the University of Arizona, Stanford University, the University of Texas and NASA's Jet Propulsion Laboratory.

Using images collected by the NASA spacecraft Galileo, the researchers developed a model to explain how a combination of freezing and pressurization could lead to a cryovolcanic eruption, or a burst of water. The results, published in Geophysical Research Letters, have implications for the habitability of Europa's underlying ocean – and may explain eruptions on other icy bodies in the solar system.

"Plumes are great sources to get information from the interior and subsurface of a planetary body that is otherwise very hard to access far away from our home planet," said Joana Voigt, co-lead author of the paper and a graduate research assistant in Christopher Hamilton's research group at the UArizona Lunar and Planetary Laboratory. "However, we need to better understand the mechanisms driving eruptions and where the plumes were fed from. In the case of Europa there are two possible plumbing systems: transported liquids directly from the ocean below or feeding from a reservoir closer to the surface."

Scientists have speculated that the vast ocean hidden beneath Europa's icy crust could contain elements necessary to support life. But short of sending a submersible to the moon to explore, it's difficult to know for sure. That's one reason Europa's plumes have garnered so much interest: If the eruptions are coming from the subsurface ocean, the elements could be more easily detected by a spacecraft like the one planned for NASA's upcoming Europa Clipper mission.

But if the plumes originate in the moon's icy shell, they may be less hospitable to life, because it is more difficult to sustain the chemical energy to power life there. In this case, the chances of detecting habitability from space are diminished.

"Understanding where these water plumes are coming from is very important for knowing whether future Europa explorers could have a chance to actually detect life from space without probing Europa's ocean," said the other co-lead author Gregor Steinbrügge, a postdoctoral researcher at Stanford's School of Earth, Energy & Environmental Sciences.

The researchers focused their analyses on Manannán, an 18-mile-wide crater on Europa that was created by an impact with another celestial object some tens of millions of years ago. Reasoning that such a collision would have generated a tremendous amount of heat, they modeled how melting and subsequent freezing of a water pocket within the icy shell could have caused the water to erupt.

The model indicates that as Europa's water transformed into ice during the later stages of the impact, pockets of water with increased salinity could be created in the moon's crust. Furthermore, these salty water pockets can migrate sideways through Europa's ice shell by melting adjacent regions of less brackish ice, and consequently become even saltier in the process.

"We developed a way that a water pocket can move laterally – and that's very important," Steinbrügge said. "It can move along thermal gradients, from cold to warm, and not only in the down direction as pulled by gravity."

The model predicts that when migrating brine pockets reached the center of Manannán crater, they became stuck and began freezing, generating pressure that eventually resulted in a plume, estimated to have been over a mile high. The eruption of this plume left a distinguishing mark: a spider-shaped feature on Europa's surface that was observed by Galileo imaging and incorporated in the researchers' model.

Voigt said the spider feature looked immediately familiar, as it reminded her of similar features she had studied in images taken by the UArizona-led HiRISE camera on Mars, but she was skeptical because the geologic settings of Mars and Europa are drastically different.

"But geology doesn't lie," she said. "The features we observe on the surface are a result of the underlying processes, even if our current theories and ideas can't provide an answer – that only means we might need to think outside the box."

The relatively small size of the plume that would form at Manannán indicates that impact craters probably can't explain the source of other, larger plumes on Europa that have been hypothesized based on Hubble and Galileo data, the researchers say. But the process modeled for the Manannán eruption could happen on other icy bodies, even without an impact event.

"We are not suggesting that recently observed plumes on Europa were caused by the same impact triggering mechanism as the older deposits, but brine migration may be a factor," said UArizona's Hamilton, an associate professor of planetary sciences who co-authored the report. He added that the mechanism described in the paper is also applicable to other icy worlds, such as Jupiter's moon Ganymede, Saturn's moons Enceladus and Titan, and the dwarf planet Ceres, which is the largest object in the asteroid belt between Mars and Jupiter.

The study also provides estimates of how salty Europa's frozen surface and ocean may be, which in turn could affect the transparency of its ice shell to radar waves. The calculations, based on imaging from Galileo from 1995 to 1997, show Europa's ocean may be about one-fifth as salty as Earth's ocean – a factor that will improve the capacity for the Europa Clipper mission's radar sounder to collect data from its interior.

The new model offers insights that help untangle Europa's complex surface features, which are subject to hydrological processes, the pull of Jupiter's gravity and hidden tectonic forces within the icy moon.

"Even though plumes generated by brine pocket migration would not provide direct insight into Europa's ocean, our findings are exciting because they suggest that Europa's ice shell itself is very dynamic," Voigt said.

The other co-authors on the paper are Don Blankenship, Krista Soderlund, Natalie Wolfenbarger and Duncan Young from the University of Texas at Austin; Dustin Schroeder at the Stanford's School of Earth, Energy & Environmental Sciences and Steven Vance from NASA's Jet Propulsion Laboratory.

The research was supported by the G. Unger Vetlesen Foundation. A portion of the work was carried out by the Jet Propulsion Laboratory, Caltech, under a contract with NASA.