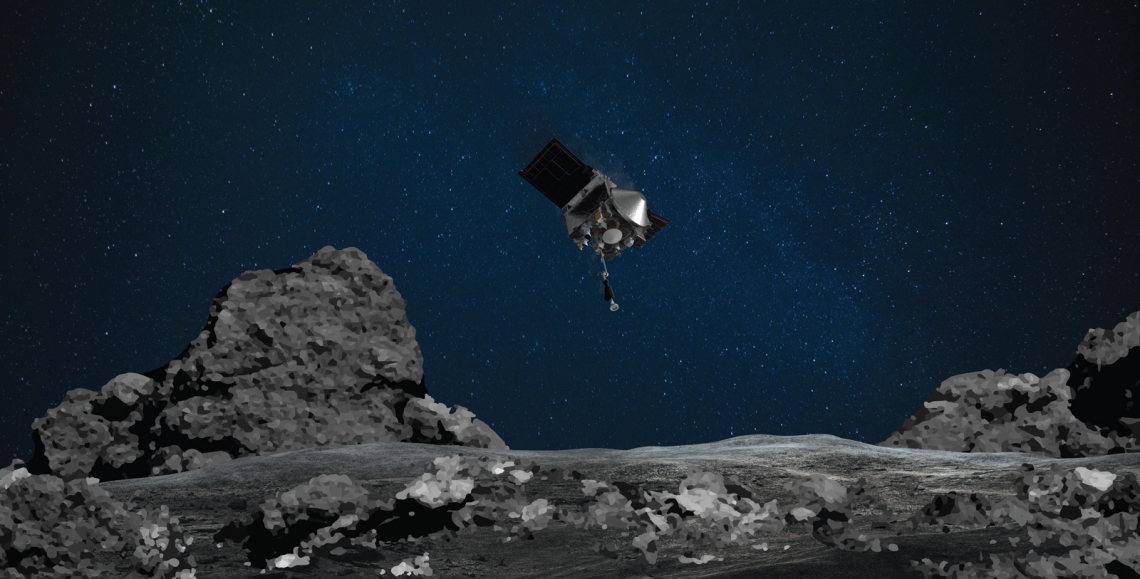 NASA's first asteroid-sampling spacecraft completed its second successful sample collection rehearsal on Aug. 11 and is now ready for the main event – touching down on asteroid Bennu's surface in October.

During its final practice run of the sampling sequence, the spacecraft of the University of Arizona-led OSIRIS-REx mission reached an approximate altitude of 131 feet, or 40 meters, over sample site Nightingale before executing a back-away burn. Nightingale, OSIRIS-REx's primary sample collection site, is located in a crater in Bennu's northern hemisphere.

The approximately four-hour matchpoint rehearsal took the spacecraft through the first three of the sampling sequence’s four maneuvers: the orbit departure burn, the checkpoint burn and the matchpoint burn. Checkpoint is the point where the spacecraft autonomously checks its position and velocity before adjusting its trajectory down toward the event's third maneuver. Matchpoint is the moment when the spacecraft matches Bennu's rotation in order to fly in tandem with the asteroid surface, directly above the sample site, before touching down on the targeted spot.

Four hours after departing its 0.6-mile safe-home orbit, OSIRIS-REx performed the checkpoint maneuver at an approximate altitude of 410 feet above Bennu's surface. From there, the spacecraft continued to descend for another eight minutes to perform the matchpoint burn. After descending on this new trajectory for another three minutes, the spacecraft reached an altitude of approximately 131 feet – the closest the spacecraft has ever been to Bennu – and then performed a back-away burn to complete the rehearsal.

During the rehearsal, the spacecraft successfully deployed its sampling arm, the Touch-And-Go Sample Acquisition Mechanism, from its folded, parked position out to the sample collection configuration. Additionally, some of the spacecraft's instruments collected science and navigation images and made spectrometry observations of the sample site, as will occur during the sample collection event. These images and data were downlinked to Earth after the event’s conclusion.

Because the spacecraft and Bennu are currently about 179 million miles from Earth, it takes approximately 16 minutes for the spacecraft to receive the radio signals used to command it. This time lag prevented live commanding of flight activities from the ground during the rehearsal. As a result, the spacecraft performed the entire rehearsal sequence autonomously. Prior to the rehearsal's start, the OSIRIS-REx team uplinked all of the event's commands to the spacecraft and then provided the "go" command to begin the event. The actual sample collection event in October will be conducted the same way.

This second rehearsal provided the mission team with practice navigating the spacecraft through the first three maneuvers of the sampling event and was an opportunity to verify that the spacecraft's imaging, navigation and ranging systems operated as expected during the first part of the descent sequence.

The rehearsal also confirmed that OSIRIS-REx's Natural Feature Tracking guidance system accurately estimated the spacecraft's trajectory after the matchpoint burn, which is the final maneuver before the sample collection head contacts Bennu's surface. This rehearsal was also the first time that the spacecraft's on-board hazard map was employed. The hazard map delineates areas that could potentially harm the spacecraft. If the spacecraft detects that it is on course to touch a hazardous area, it will autonomously back away once it reaches an altitude of 16 feet. While OSIRIS-REx did not fly that low during the rehearsal, it did employ the hazard map to assess whether its predicted touchdown trajectory would have avoided surface hazards, and found that the spacecraft's path during the rehearsal would have allowed for a safe touchdown on sample site Nightingale.

During the last minutes of the spacecraft's descent, OSIRIS-REx also collected new, high-resolution navigation images for the Natural Feature Tracking guidance system. These detailed images of Bennu's landmarks will be used for the sampling event and will allow the spacecraft to accurately target a very small area.

"Many important systems were exercised during this rehearsal – from communications, spacecraft thrusters, and most importantly, the onboard Natural Feature Tracking guidance system and hazard map," said OSIRIS-REx principal investigator Dante Lauretta of the University of Arizona's Lunar and Planetary Laboratory. "Now that we've completed this milestone, we are confident in finalizing the procedures for the TAG event. This rehearsal confirmed that the team and all of the spacecraft's systems are ready to collect a sample in October."

The mission team has spent the last several months preparing for matchpoint rehearsal while maximizing remote work as part of the COVID-19 response. On the day of rehearsal, a limited number of personnel monitored the spacecraft’s telemetry from Lockheed Martin Space's facility, NASA's Goddard Space Flight Center and the University of Arizona, taking appropriate safety precautions while the rest of the team performed their roles remotely.

The spacecraft will travel all the way to the asteroid's surface during its first sample collection attempt, scheduled for Oct. 20. During this event, OSIRIS-REx's sampling mechanism will touch Bennu's surface for several seconds, fire a charge of pressurized nitrogen to disturb the surface and collect a sample before the spacecraft backs away. The spacecraft is scheduled to return the sample to Earth on Sept. 24, 2023.

To Understand the Machinery of Life, a UArizona Scientist Breaks it on Purpose