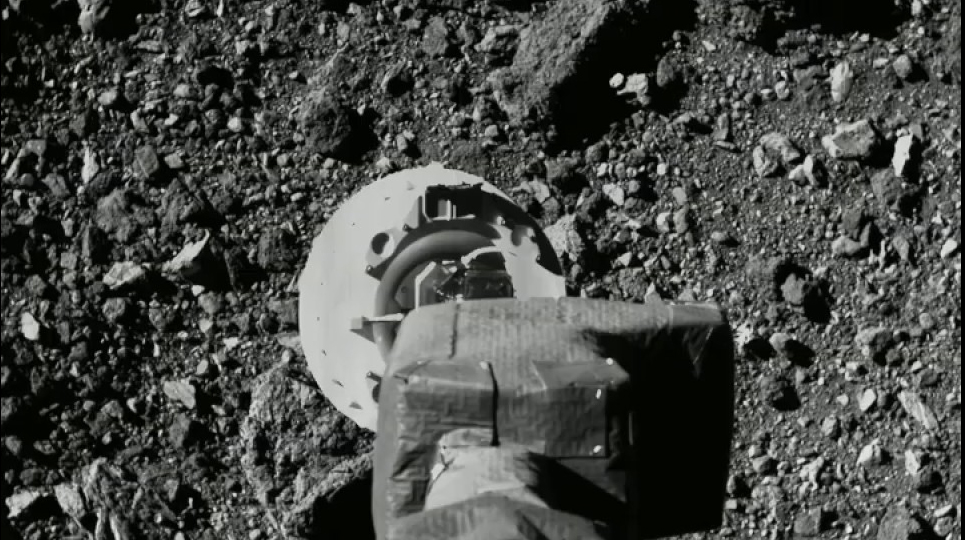 A carefully choreographed dance on April 14 brought the spacecraft of the University of Arizona-led OSIRIS-REx asteroid sample return mission within just over 200 feet of the surface of the asteroid Bennu – closer than ever before.

During the maneuver, which marked the first rehearsal of the NASA mission's asteroid sample collection, the spacecraft engaged in a series of thruster burns and repositioning maneuvers to go through the exact same motions that planners mapped out for the mission's sample collection event, slated for late summer.

A series of images captured by the spacecraft's SamCam, one of several cameras designed and built at the University of Arizona's Lunar and Planetary Laboratory, shows the spacecraft's field of view as it approaches, hovers and then moves away from Bennu's surface.

"The goal of this checkpoint rehearsal is to make sure we get through the first two maneuvers needed to accomplish the sampling, and then safely back away," says Dani DellaGiustina, lead image processing scientist for the OSIRIS-REx mission. "What we're seeing here is the spacecraft as it approaches Bennu's surface, and once the spacecraft executes its checkpoint maneuver to initiate its descent, it pulls away. The image sequence captures that entire event."

During the April 14 rehearsal, the spacecraft – operating autonomously more than 140 million miles from Earth – deployed its sampling arm, called the Touch-And-Go Sample Acquisition Mechanism, or TAGSAM, which folded out from its parked position and extended to 11 feet. The arm has a round sampler head at the end, designed to collect a sample of loose surface material, called regolith, from Bennu.

During the touch-and-go sample collection event later this summer, the sampler head will be extended toward Bennu, and the momentum of the spacecraft's slow, downward trajectory will push it against the asteroid's surface for about five seconds—just long enough to obtain a sample. At contact, nitrogen gas will blow onto the surface to roil up dust and small pebbles, which will then be captured in the TAGSAM head.

The new series of images was taken as OSIRIS-REx swoops down toward Bennu's surface, with the arm and attached sample-collection head visible in the central part of the image frames. As it gets closer, the relatively clear, dark patch of Bennu's sample site, dubbed Nightingale, becomes visible. Just below it, a large, dark boulder, measuring 43 feet long, can be seen as the spacecraft approaches. The sequence was created using over 30 images taken by the spacecraft's SamCam camera. For context, the images are oriented with Bennu's west at the top. In other words, the asteroid's latitudinal lines would run vertically through the image.

"We're moving much more slowly than the animated image provides a sense for, and the majority of the movement you see is actually Bennu rotating underneath us," DellaGiustina said.

During the rehearsal, the spacecraft's suite of electronic eyes took images about every 20 seconds and sent them back to Earth. As soon as they arrived, DellaGiustina and her team got to work.

"I was scrolling through the images very quickly to see how much movement there was between the frames," she said. "Toward the end, when Nightingale came into view, it was so satisfying to see that right where we expected it to be before we backed off."

To create the animated sequence, DellaGiustina's team applied software algorithms, including components custom made by the mission team, to process them and stitch 30 frames together into the animated GIF.

"We don't use SamCam very often, because the imager was developed specifically to document the sampling event," she said. "To see SamCam in action, and to see it is doing exactly what it was designed to do, is very satisfying."

DellaGiustina said there really weren't any surprises during the checkpoint rehearsal.

"We've been planning this event for so long that all of us had a very concrete idea in our minds (of the checkpoint rehearsal), so you could say the only surprise was the fact that we saw exactly what we expected," DellaGiustina says. "I think that's a testament to our navigation team doing an extraordinary job."

The spacecraft is slated to go for the touch-and-go maneuver on Aug. 25, when it will gently descend onto its surface and collect the largest sample of extraterrestrial material since the Apollo moon landings.