UArizona Scientists Thrilled by Unprecedented 'Portrait' of an Alien World 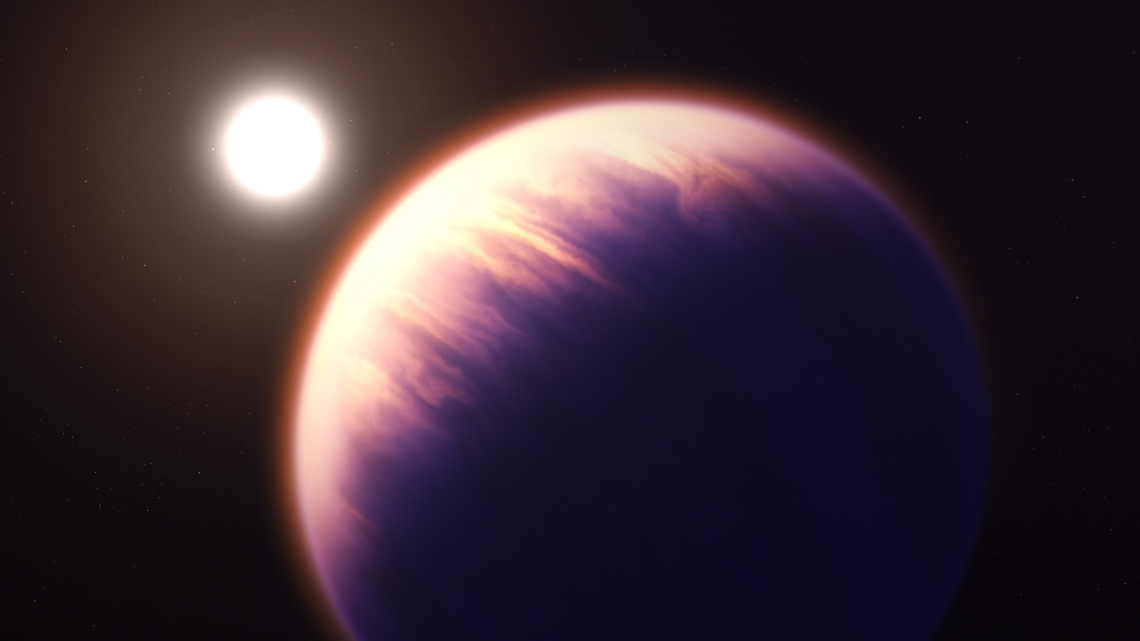 Leveraging the power of an imaging instrument built at the University of Arizona, NASA's James Webb Space Telescope has given astronomers the first view of an exoplanet's atmosphere in unprecedented detail.

A suite of discoveries to be published in five scientific papers provides a complete molecular and chemical profile of the sky surrounding WASP-39b, a so-called hot Saturn. The planet is about as massive as Saturn but is closer to its star, which is 700 light-years away, than Mercury, the innermost planet of our solar system, is to the sun.

UArizona scientists contributed substantially to the findings, which are based on data collected with JWST's Near-Infrared Camera, or NIRCam, which was designed by a team led by Marcia Rieke, a Regents Professor in the UArizona Steward Observatory.

While JWST and other space telescopes, including NASA's Hubble and Spitzer, previously revealed isolated ingredients of this broiling planet's atmosphere, the new readings from JWST provide a full menu of atoms, molecules, and even signs of active chemistry and clouds, according to a NASA news release.

In one of the "most exciting discoveries," the team reports that it was able to identify and pin down a molecule in the planet's atmosphere that showed up in previous observations but whose identity remained a mystery until now.

"We've now identified that molecule as sulfur dioxide," said Megan Mansfield, a NASA Sagan Fellow at Steward Observatory. "What's even more exciting is that in order for this molecule to be detected as clearly as it was, we think there must have been some photochemistry going on in the atmosphere, which has never been observed in a planet outside of our solar system."

Photochemistry – the process by which energetic starlight initiates chemical reactions that alter a planet's atmosphere – is fundamental for life on Earth, the scientists say. Photochemistry is responsible for maintaining the protective ozone layer in the Earth's upper atmosphere, helps plants and algae grow and allows humans to produce vitamin D in their skin.

Among the major contributors on the UArizona team were Sarah Moran, a postdoctoral research fellow at the UArizona Lunar and Planetary Lab who developed theoretical models of exoplanet atmospheres, and observer Everett Schlawin, an assistant research professor at Steward.

To see light from WASP-39b, JWST tracked the planet as it passed in front of its star, allowing some of the star's light to filter through the planet's atmosphere. Different types of chemicals in the atmosphere absorb different colors of the starlight spectrum, so the colors that are missing tell astronomers which molecules are present. By viewing the universe in infrared light, JWST can pick up chemical fingerprints that can't be detected in visible light.

In addition to the "mystery molecule," the instruments on JWST also detected sodium, potassium, water, carbon dioxide and carbon monoxide in the atmosphere of WASP-39b, Moran said.

The team also found evidence of clouds in the exoplanet's atmosphere.

"We learn that the cloud deck on WASP-39b is not one uniform blanket but has more complex meteorological patterns, similar to the bands of clouds we see on planets in our solar system," Moran said.

The findings bode well for the capability of JWST's instruments to conduct a broad range of investigations of all types of exoplanets, including probing the atmospheres of smaller, rocky planets like those in the TRAPPIST-1 system, which consists of seven potentially Earthlike planets around a single star.

"Our collective effort verified that JWST works incredibly well to measure new molecules in atmospheres and find new mysteries, which is incredibly invigorating," Mansfield said. "NIRSpec (Near Infrared Spectograph), NIRCam, and NIRISS (Near Infrared Imager and Slitless Spectrograph) meet or even exceed expectations for transmission spectroscopy of exoplanets."