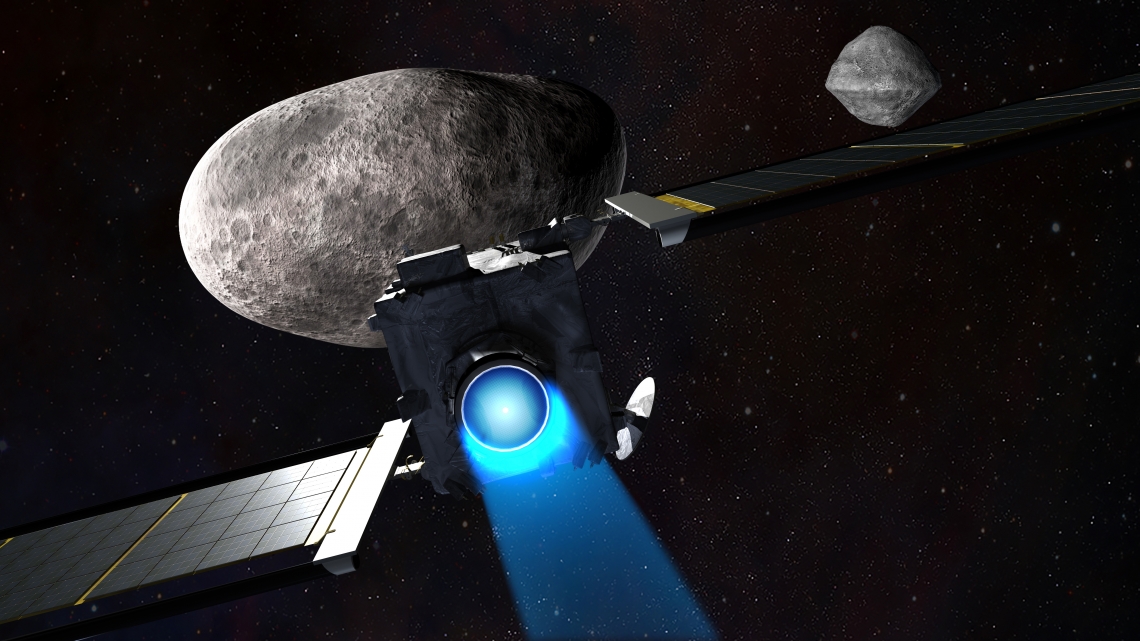 On a spring night in 1996, a camera on the University of Arizona Steward Observatory's 36-inch telescope atop Kitt Peak captured three important images of a bright object sweeping across a backdrop of seemingly static stars.

The object turned out to be a half-mile-wide, potentially hazardous near-Earth asteroid, caught on camera by Joseph Montani, a member of the university's Spacewatch group in the Lunar and Planetary Laboratory. Originally dubbed 1996 GT, the asteroid would later be renamed Didymos – which is Greek for "twin" – at Montani's suggestion. The name was inspired by the discovery in 2003 that the asteroid has a small companion, only 525 feet across.

That companion – named Dimorphos, meaning having two forms – is the target of an upcoming NASA mission designed to test technology that could redirect asteroids that potentially threaten life on Earth.

Dimorphos and Didymos both orbit the sun, and the smaller of the pair orbits the larger one about once every 12 hours. Though Didymos and Dimorphos pose no threat to Earth, NASA identified Dimorphos as an ideal target to test asteroid redirection technology that could help protect Earth from future asteroid threats.

On Sept. 26, 2022, NASA's Double Asteroid Redirection Test, or DART, mission spacecraft will slam into Dimorphos, and scientists will closely study how the impact alters the smaller asteroid's orbit around Didymos. DART launched on Nov. 24, 2021.

Spacewatch is led by principal investigator Melissa Brucker. She is also on the science investigation team for DART. Spacewatch and other research groups plan to collect data on the light reflected from the two asteroids after impact.

"We'll take a long series of images to measure the brightness of the system over time. Didymos and Dimorphos will look brighter when they're next to each other than when one is in front. In a series of images, we will be able to determine how long it takes Dimorphos to orbit Didymos," Brucker said. "Working on this mission is very exciting. I've been working on near-Earth asteroid tracking for eight years, so being able to participate in the first planetary defense demonstration is a really great opportunity."

The original goal of Spacewatch was to survey and discover small objects orbiting the sun, such as asteroids and comets, to better understand the evolution of the solar system. Spacewatch started shifting focus in 1998 and now follows up on discoveries made by astronomical surveys, such as UArizona's Catalina Sky Survey, by monitoring the positions and movement of newly discovered potentially hazardous objects so that they do not become lost.

Spacewatch continues to use the Steward Observatory 0.9-meter (36-inch) telescope atop Kitt Peak, as well as the Lunar and Planetary Laboratory's 1.8-meter (72-inch) telescope, which has been operational on Kitt Peak since 2002.

New asteroids and comets are discovered by groups around the globe constantly, with astronomers slicing the sky into regions that telescopes survey multiple times a night, snapping images at each pass. Surveys capture each region three to four times a night.

Astronomers then compare the positions of moving objects to background stars in an image. They send the resulting measurements to the International Astronomical Union's Minor Planet Center, which takes the observations and determines orbits for the objects.

As one of the longest running asteroid tracking groups, Spacewatch can claim many firsts.

It was the first group to use a charge-coupled device, or CCD, camera to routinely survey the sky for comets and asteroids. It also claims the first CCD-discovered near-Earth asteroid, 1989 UP (now called 496816), and comet, dubbed 125P/1991 R2 Spacewatch. Spacewatch was also the first astronomical group to develop automated, real-time software for moving-object detection and the first to discover a near-Earth asteroid by software – 1990 SS (now called 11885 Summanus).

Between May 1984 and June 2022, using UArizona telescopes on Kitt Peak, Spacewatch submitted 15,777,248 astrometric records of asteroids and comets to the Minor Planet Center. Of those 151,805 were of 15,072 unique near-Earth objects, including 1,883 potentially hazardous objects.