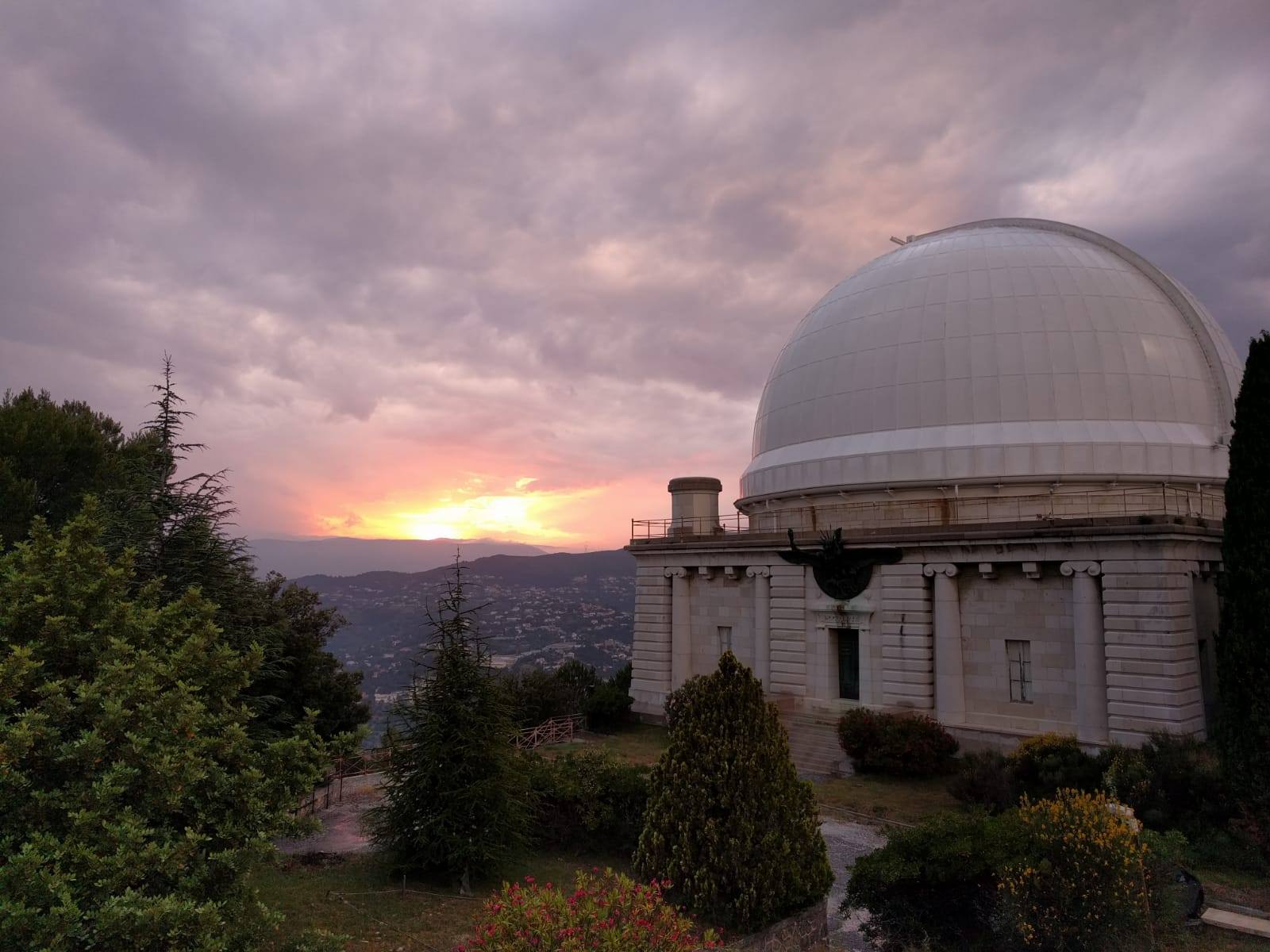 The Curson Travel Award supported my expenses for airfare to visit the Observatoire de la Côte d’Azur (OCA) during the last summer. I visited OCA for two months (June and July 2018) and collaborated with Dr. Marco Delbo on thermal modelling of asteroids. Working in Marco’s group allowed me to learn that infrared measurements are crucial for the characterization of airless bodies. While at OCA, I learned how to master the TPM code (Delbo et al. 2015), which turned out to be a very important tool for my present and future research.

Thermophysical models simulate the insolation and the consequent infrared emission from an asteroid surface. Direct measurements of emitted infrared fluxes therefore allows constraining the surface properties of asteroid. The total emitted infrared flux is contributed both by the rocks and regolith components. These materials have different thermal inertiae—the resistance of a material to change its temperature when perturbed by a heat input—and their abundance can vary according to the type and magnitude of processes occurring on the surface (e.g., thermal fatigue, micrometeoritic bombardment). Thermal inertiae, rock abundance and surface roughness play an important role in determining the orbital evolution of the asteroid (i.e., through the Yarkovsky effect) and are a proxy for understanding the processing occurring in the thermal skin depth. The listed properties are also instrumental to spacecraft design and operation planning. Thermal inertia defines the thermal environment in which a lander or a touch-and-go spacecraft has to operate; (macroscopic) surface roughness and rock abundance factor in the selection of landing sites from an hazard avoidance perspective; typical sampling mechanism (e.g., TAGSAM on the OSIRIS-REx mission) have stringent requirements for the maximum size of the regolith and therefore to the thermal inertia of this component.

At OCA, my project consisted in creating a neural network representation of Dr. Delbo’s TPM code, trained on a (4-D) grid of simulations performed using the TPM code. The developed surrogate model predicts the infrared flux associated with an asteroid whose surface is modeled by means of 4 parameters: thermal inertia of the regolith, thermal inertia of the rock, rock abundance and surface roughness. Once validated, the surrogate model can be statistically inverted using Markov Chain Monte Carlo inversion methods. This new methodology has been proved to be able to constrain the properties of the surface of bodies such as asteroid (101955) Bennu—target of the OSIRIS-REx mission, for which we inverted simulated fluxes—and (25143) Itokawa, for which we successfully inverted observed ground-based infrared data (Cambioni et al. 2018, in preparation). Our research is particularly timely as both the NASA OSIRIS-REx mission and JAXA Hayabusa II mission will start soon their operations around the respective targets. In addition to the above, I also contacted other researchers involved in planetary formation studies, such as Dr. Alessandro Morbidelli and Dr. Paolo Tanga, and I had the opportunity to give a seminar about my research regarding machine learning application to characterize similar-sized collisional event (Cambioni et al. 2018, EPSC).

Overall, the visiting has been a success and hopefully just the first step of a fruitful collaboration. 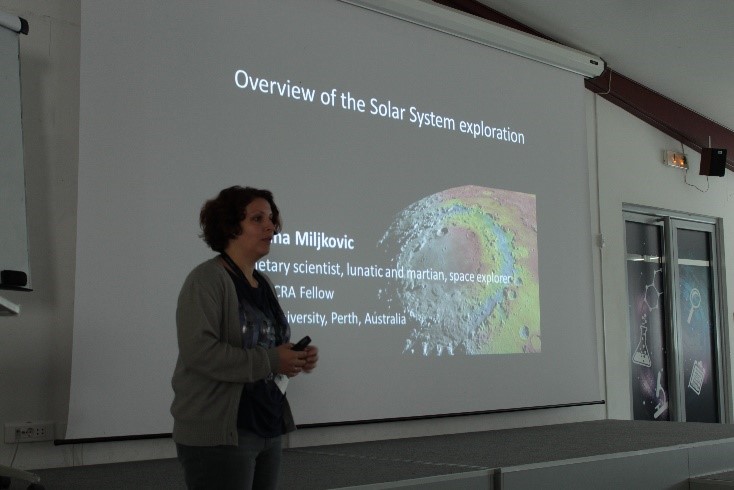 The Curson award helped me travel to Serbia to participate in the Workshop in Geology and Geophysics of the Solar System. This workshop was held from 23rd June to 1st July 2018 in the Petnica Science Center in the village of Petnica in Serbia and was attended by planetary science graduate students and research scientists from different parts of the world. This is the first workshop of its kind that brought together new and experienced scientists in the field of planetary geology from many international institutions. The workshop was structured around a series of lectures by participating faculty and scientists. The talks covered several topics related to geology, geophysics and geochemistry of solar system objects. The speakers also talked about their ongoing research work, some of it unpublished, which was very exciting to hear about. As a graduate student in the early stage of my program, this was very helpful in understanding the various research problems that are currently being addressed in our field. In addition, it was also a great opportunity for networking with a small group of international researchers.

Two other LPL graduate students, Hamish Hay and Amanda Stadermann, were also present for the workshop. The list of speakers included my advisor and LPL Associate Professor, Dr. Lynn Carter who spoke about the geology of icy moons and Venus. Another exciting talk was by Dr. Kevin Walsh of the Southwest Research Institute discussing the ongoing Hayabusa2 and OSIRIS-REx missions. A few of my other favorites were Dr. Matija Ćuk of SETI Institute talking about formation and evolution of moons, an overview of NASA’s plans for future exploration of Mars by Dr. Vlada Stamenković of Jet Propulsion Laboratory and lectures about the interiors of terrestrial planets by Dr. Mark Wieczorek from the Centre national de la recherche scientifique. 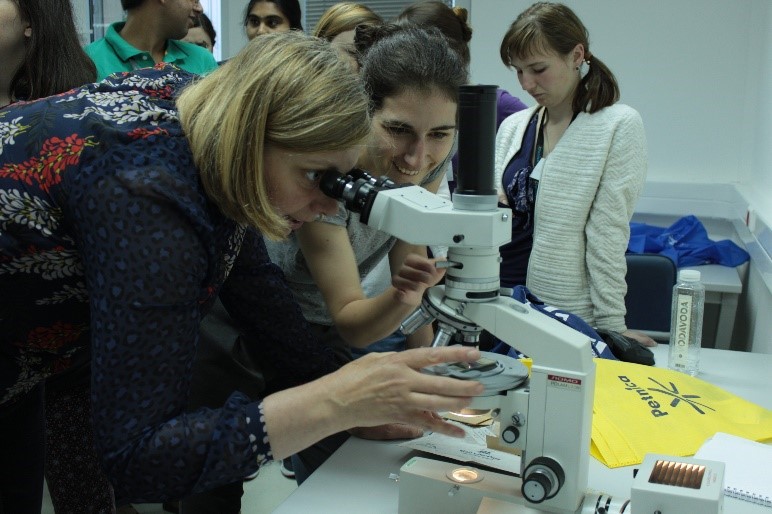 The talks were scheduled during daytime and the evenings were dedicated to poster presentations and lab demonstrations. I have been studying the near subsurface structure of the caldera of Arsia Mons volcano on Mars using SHAllow RADar (SHARAD). The radar sees layered structure in the subsurface which is unusual in volcanic terrains. I got the chance to present a poster and discuss my results with other researchers during these poster sessions. 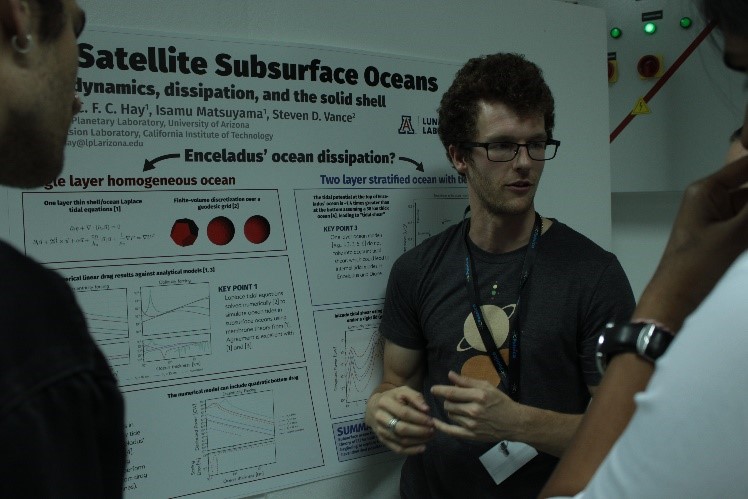 The Petnica Science Center also has its own meteorite lab and a diverse collection of beautiful meteorites that we were given access to one of the evenings.

The workshop also turned out to be a huge cultural learning experience. We visited the neighboring city of Valjevo which stands out for its rich Balkan history, quaint vineyards and pre-World War architecture from the time of Ottoman Turks. The highlight of this cultural experience was the organizers treating everyone to a traditional Serbian dinner on the night of June 27th, with traditional food, drinks and local musicians.

Attending this workshop was a big cultural and scientific learning experience. I would highly recommend this workshop to early stage planetary science graduate students. It is a fun and friendly learning environment where one can make lasting connections with upcoming researchers who share similar interests. 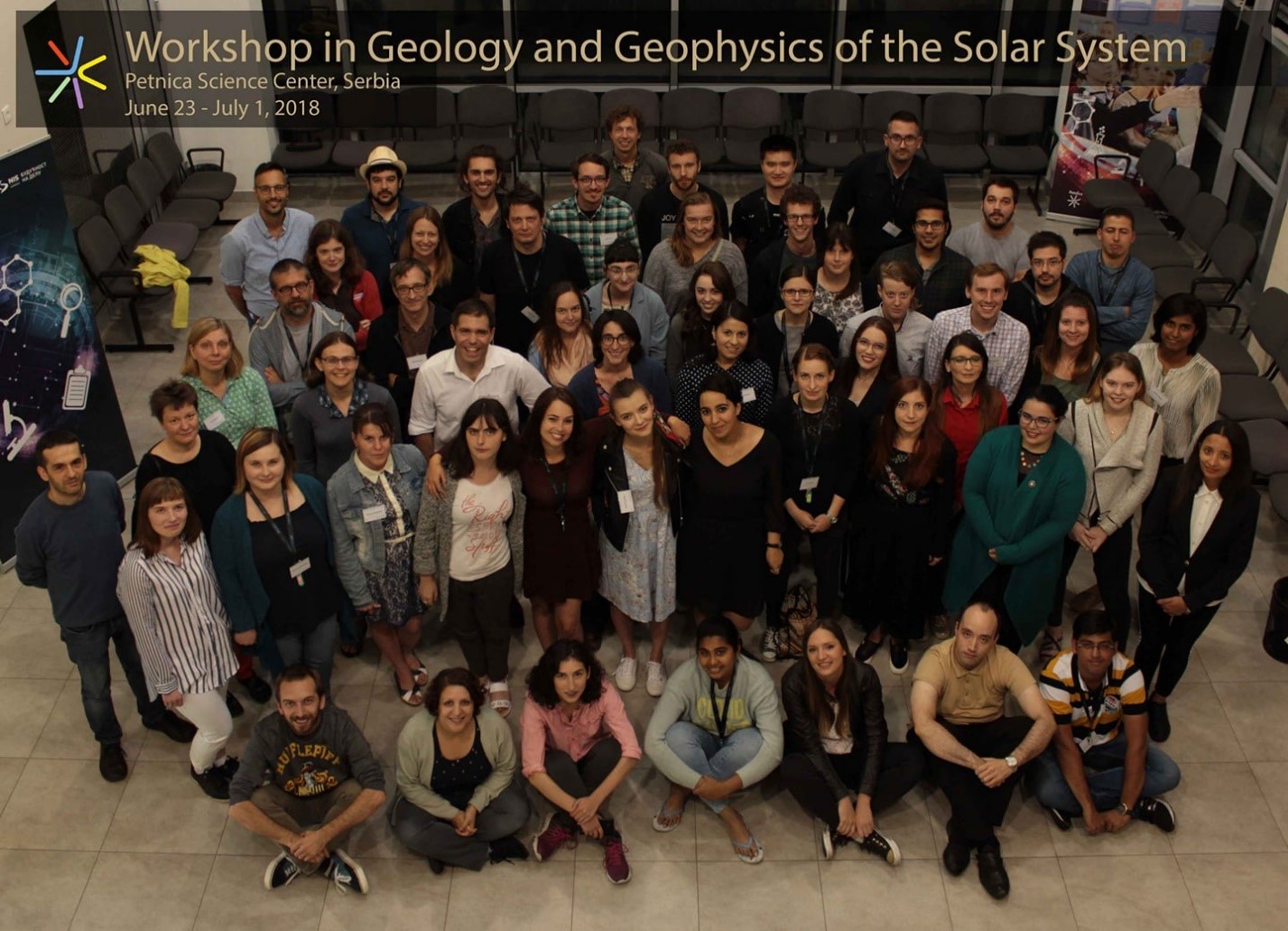 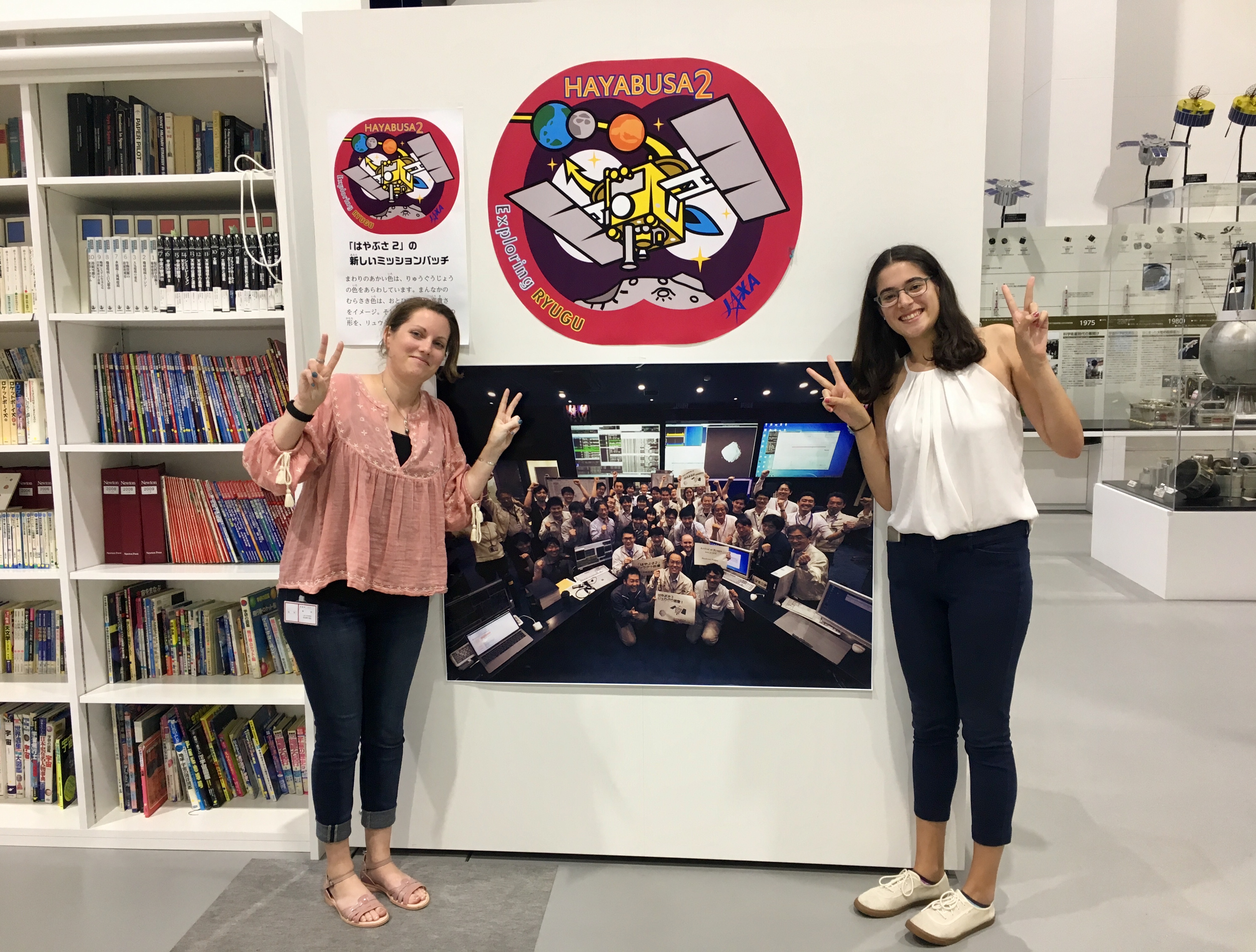 The Curson Travel Award supported my travels to Tokyo, Japan to work at the Japan Aerospace Exploration Agency (JAXA) for six weeks. During the summer of 2018, I was given the rare opportunity to work at JAXA on their asteroid sample-return mission, Hayabusa2. I arrived at the mission headquarters just as the spacecraft was approaching the target asteroid, Ryugu. Working with Dr. Lucille Le Corre, a Hayabusa2 participating scientist from the Planetary Science Institute, I created 3D topographic models of the asteroid’s surface in real time using observations from the instruments onboard the spacecraft.

These models were used by JAXA to select a sampling site on Ryugu and to investigate the geology of various surface features. On September 22nd, 2018, the two MINERVA-II1 rovers (called 1A and 1B) were deployed and successfully touched down on asteroid Ryugu. It was amazing to see how my work, a small piece in the puzzle, combined with the tireless hours of work from both the international scientists and JAXA scientists, resulted in a successful touchdown. The samples returned from both the Hayabusa2 and OSIRIS-REx missions will go a long way in helping scientists understand the environment at the beginning of the Solar System. 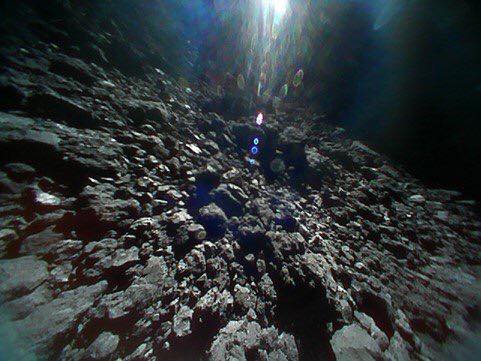 I also prepared and selected different terrain models for efficient use during the approach phase and preliminary mapping phase of the mission. I was able to successfully collaborate with international scientists from Japan, France, Germany and Italy as we worked towards a common goal. I have also been able to discuss about my work in Japan numerous times since returning to the University of Arizona. Moreover, one of my goals during my time at JAXA was also to understand the organization and communication of a science team during a mission-critical event, as this experience will be beneficial to my future career at NASA. My experience and observations at JAXA made me realize how beneficial international collaborations can be in pushing the frontiers of science and exploration. My goal is to one day manage a fleet of spacecraft that will investigate new Solar System destinations. My time at JAXA helped me prepare for my future career by allowing me to observe and compare JAXA’s Hayabusa2 asteroid sample-return mission to University of Arizona’s very own asteroid sample-return mission, OSIRIS-REx.

I also had an amazing experience living in Japan for over a month and was able to enjoy the food and culture on the weekends. A few choice experiences include visiting the MORI Building Digital Art Museum in Tokyo, feeding polite deer in Nara, and exploring temples in Kyoto. 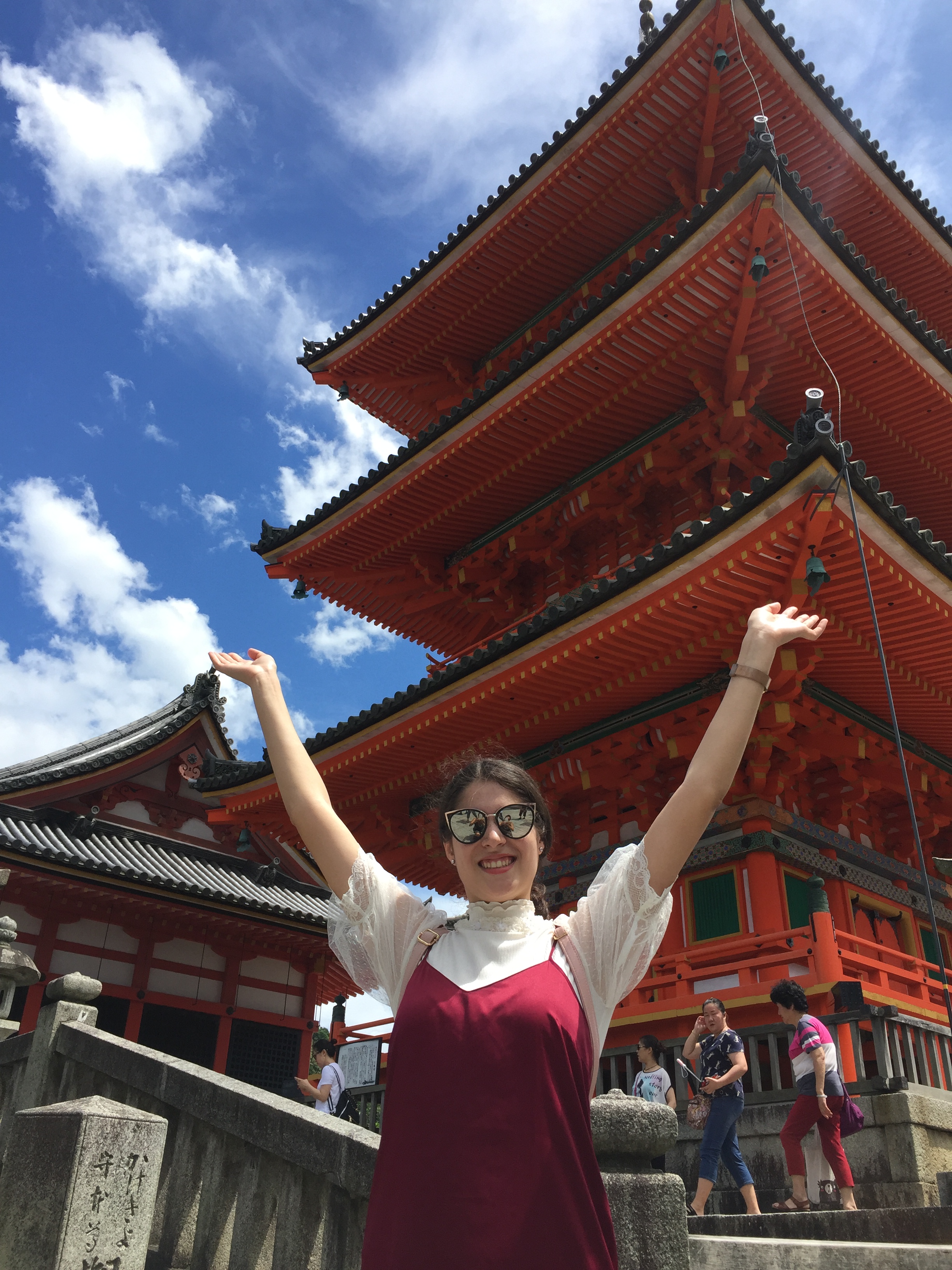 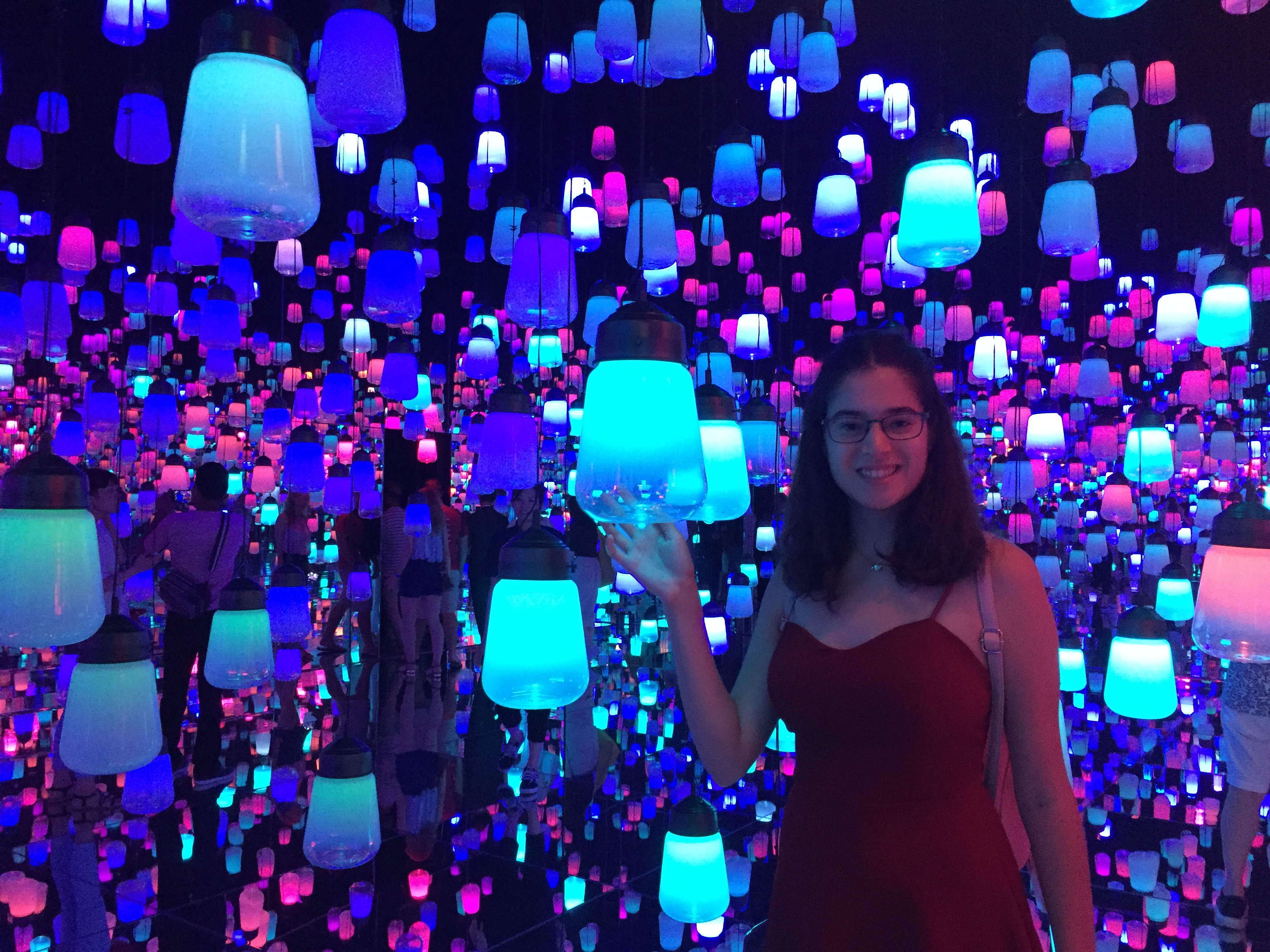 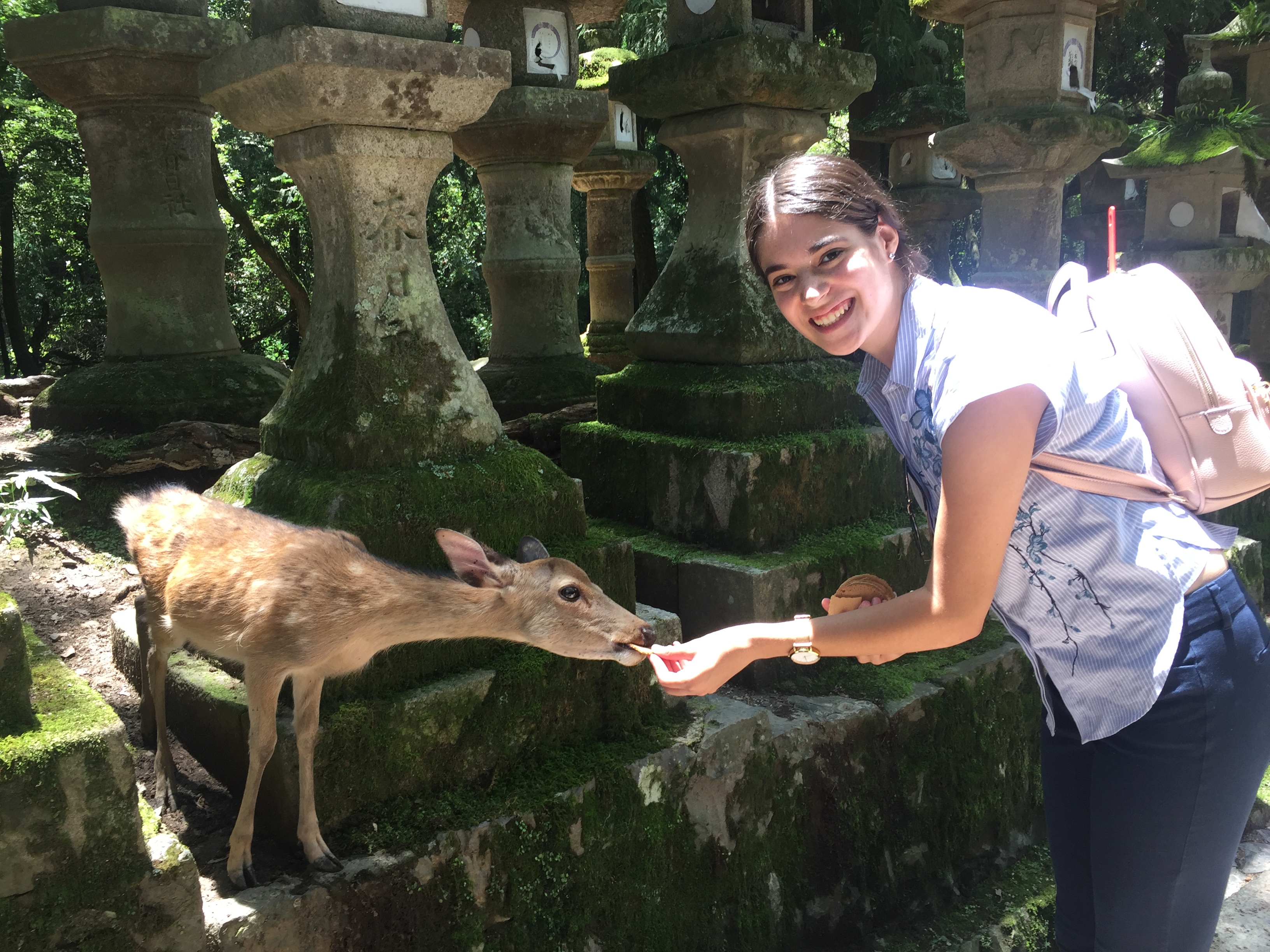