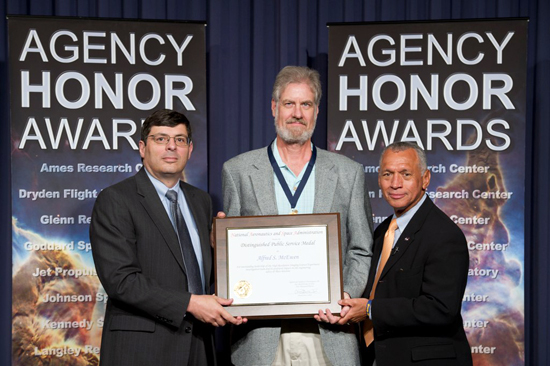 Alfred McEwen, professor of planetary science at the UA's Lunar and Planetary Laboratory and principal investigator of the largest imaging campaign ever launched to another planet, has been awarded NASA's Distinguished Public Service Medal, the highest NASA honor given to a non-government employee.

McEwen accepted the award on June 30 during a ceremony at the NASA headquarters in Washington, D.C.

As the principal investigator on the High Resolution Imaging Science Experiment, or HiRISE, for the Mars Reconnaissance Orbiter, or MRO, McEwen oversees the most ambitious undertaking ever launched to image another planet. HiRISE has yielded stunning photographs in unprecedented detail that have dramatically changed our view of the Red Planet.

Under McEwen's leadership, the HiRISE mission team has gone out of its way to serve not only the science community but also the general public by making efforts to release the data as quickly as possible after they become available and making them accessible via user-friendly tools.

Nicknamed the "people's camera," the HiRISE camera has been aimed at imaging targets on Mars chosen by members of the public through a program called HiWish, which started last year.

"This award really recognizes the whole HiRISE team," McEwen said. "It's a joint effort involving hundreds of people, including those who developed the instrument, especially at Ball Aerospace, to the experts at NASA's Jet Propulsion Laboratory who have run the mission, to the people at Lockheed Martin where the spacecraft was built. And then there are those here at the UA of course, who run the camera and collect the scientific data, interpret them and make them available to the scientific community as well as the public."

According to NASA, the Distinguished Public Service Medal is granted only to individuals whose distinguished accomplishments contributed substantially to the NASA mission. The contribution must be so extraordinary that other forms of recognition would be inadequate.

McEwen said the HiRISE mission has made it possible to really understand active surface processes on Mars.

"For the first time we have the resolution and the capability to repeatedly image places to observe change of the surface that we did not know about before. We did not know whether the Martian sand dunes were active or not ÃƒÂ¢Ã¯Â¿Â½Ã¯Â¿Â½ now we do. We now know there are gullies that are active in the wintertime when there is carbon dioxide in the ground. Other features are active in the summer. If we want to understand geology, it's so much better to see things change instead of trying to interpret a static picture."

After working at the U.S. Geological Survey's Branch of Astrogeology in Flagstaff, McEwen obtained a doctorate in planetary geology at Arizona State University before joining LPL in 1996.

He has published more than 150 peer-reviewed publications and is the recipient of numerous NASA Group Achievement Awards for his contributions to planetary missions.

HiRISE has been crucial in helping NASA assess and select landing sites for future missions such as the Mars Science Laboratory, or MSL, set to launch this fall. The size of a small SUV, MSL is the largest rover ever built to explore the Martian surface.

"Selecting a site for landing and roving is a balance of science potential and engineering constraints or risk," McEwen explained. "One site may be more scientifically promising but also more risky."

To date, after five years of circling the Red Planet, the HiRISE camera has imaged 1.3 percent of its surface. But according to McEwen, global coverage was never intended to or even hoped for this experiment.

At a resolution of roughly a foot per pixel, it would take many pixels to cover Mars, and even at the highest data rate of any previous deep space mission it takes a long time to cover Mars at that scale.

HiRISE is complemented by another camera, called the Context Camera, or CTX, which shoots pictures at 6 meters per pixel. CTX already has covered 60 percent and with a few more mission extension, probably could achieve full coverage of the Martian terrain.

McEwen is also the principal investigator on an upcoming Mars imaging program called High-resolution Stereo Color Imager, or HiSCI, for the ExoMars Trace Gas Orbiter, set to launch in January 2016. As part of the joint mission between NASA and the European Space Agency, or ESA, the UA-operated HiSCI camera will deliver high-resolution stereo color imaging at a much wider coverage than HiRISE.

HiSCI's primary mission is to measure trace gases in the Martian atmosphere. For this purpose, the spacecraft will carry two spectrometers to analyze trace gases using ultraviolet to infrared spectroscopy.