On November 4, 2011, LPL hosted a celebration of a life well lived, to honor the life and career of Michael J. Drake. Approximately 250 colleagues and friends attended. The event was streamed live by Arizona Public Media. 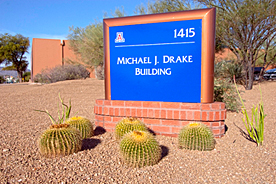 Dean Ruiz announced at the start of the program that the building at 1415 N. Sixth Avenue, formerly known as both the PHOENIX Science Operations Center and the OSIRIS-REx building, had been officially re-named the Michael J. Drake Building.

Guests, including many LPL alumni, shared stories and memories at a reception following the program.