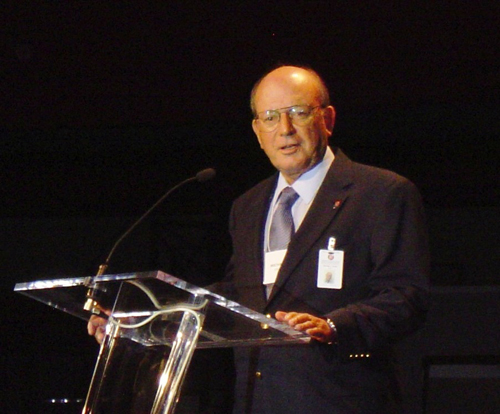 Michael J. Drake was born July 8, 1946 in Bristol, England. He grew up in England and attended college at Victoria University of Manchester where he received a Bachelor of Science degree in Geology with honors in 1967. Mike earned his Ph.D. in Geology working with Dan Weill at the University of Oregon. After a spending a year as a postdoctoral research associate with John Wood at the Smithsonian Astrophysical Observatory, Mike migrated to the University of Arizona, where he remained for the rest of his career. In Tucson he met and married his wife Gail Georgenson and together they have two well-accomplished children Matthew and Melissa and one granddaughter Elsie. Mike became a naturalized citizen of the United States and was a proud American.

Mike was an accomplished scientist with well over 100 published peer-reviewed papers. He was a master at synthesizing diverse constraints and constructing a coherent picture of events of huge scale. Some examples are his models for lunar basalt petrogenesis, magma ocean crystallization on the Earth, Mars, and Vesta, and the impact origin of the Moon. His body of published work contributed an enormous amount to our understanding of the formation, differentiation, solidification, and outgassing of planetesimals and planets. For his doctoral research Mike studied trace-element partitioning by developing an electron probe technique for rare earth element (REE) analysis. Mike focused especially on REE partitioning in plagioclase, which proved critical to understanding the formation of the feldspathic lunar crust. His work on REE geochemistry also led to his convincing study that Vesta is the source of the HED meteorites.

Mike went on to study a wide range of planetary materials including lunar and Martian meteorites. His principal research interests involved "big picture" questions of the formation and evolution of the solar system. Mike is best known for his studies on the partitioning of elements with affinities for metal or sulfide phases (Ga, Ge, P, V, Cr, Ru, Rh, Pd, Ag, Mo, Sn, Co, W). Many of his experiments were carried out at very high pressures to simulate fractionation during core formation. These very difficult experiments provided critical data for assessing the accretion and differentiation histories of the Earth, the Moon, the terrestrial planets, and their meteorite building blocks. Mike's careful experiments had a profound effect because he has used the results with great insight to understand the geochemical processes that happen as planets evolve. In his final years he studied the origin of water in the terrestrial planets and pioneered the idea that adsorption of water on silicate grain surfaces was a mechanism by which the terrestrial planets accreted.

Mike's breadth of research expertise led to his achieving the rank of Professor in the Lunar and Planetary Laboratory (LPL), the Arizona Research Laboratories, and the Department of Geosciences at the University of Arizona. He was appointed Head of the Department of Planetary Sciences and Director of the Lunar and Planetary Laboratory in 1994, a position he held until 2011. His numerous contributions to the University of Arizona were recognized in 2005 when he was appointed as Regents' Professor. Under his leadership LPL successfully built and flew a variety of spacecraft instruments including the Imager for Mars Pathfinder, the Descent Imager/Spectral Radiometer (DISR) on Cassini/Huygens, the IMAGE Extreme Ultraviolet Imager, and the Gamma-ray Spectrometer Suite on Mars Odyssey. In addition, under Mike's leadership LPL scientists were selected as Team Leader on the Visible and Infrared Mapping Spectrometer on the Cassini mission and the High-Resolution Imaging Science Experiment on Mars Reconnaissance Orbiter. Under his watch, LPL built the Surface Stereo Imager and Robotic Arm cameras and the TEGA instrument on Phoenix, and successfully operated Phoenix on the Martian surface from the University of Arizona campus.

As his crowning achievement, Mike had the vision to develop the OSIRIS-REx Asteroid Sample Return mission concept. His leadership of the OSIRIS-REx team was instrumental in its success of moving into a selected flight mission project. The scientific goals of the mission are to investigate the possibility of asteroid delivery of prebiotic molecules to Earth and Mars, to connect the meteorite collection to the astronomical asteroid spectral database, to investigate near-Earth resources that may be used by humans going to the Moon and Mars, and to improve our ability to mitigate against devastating near-Earth object impacts. As the mission leader Mike established the OSIRIS-REx guiding philosophy of obtaining excellence at every level, allowing for clear and open communication across all levels of the team, and staying focused on the mission objectives. He left no stone unturned and took extreme efforts to establish a multi-generational strategy for mission management that will ensure mission success.

Mike was a leader in the scientific community. More importantly he had the insight to ensure he had the time for his students and always encouraged them to follow their own ideas and take chances. Mike was a dedicated educator and a strong believer in supporting the next generation of scientists and leaders. He received the UA College of Science Career Distinguished Teaching Award in 1999 and the University of Arizona Senior Honorary BobCats Outstanding Faculty Member Award in 2006. He inspired many young planetary scientists as the Director of State of Arizona Space Grant Consortium from 2000 to 2011. He served as the University of Arizona representative to the Universities Space Research Association from 2000 to 2011 and served on the Board of Trustees for the Universities Space Research Association from 2007 to 2011. Mike's ability to inspire and support the next generation of scientific leaders ensures that his legacy will continue well into the future.