Get to Know a Staff Scientist: Federico Fraschetti 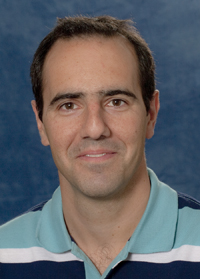 Federico Fraschetti is an Associate Staff Scientist at LPL and Guest Lecturer/Faculty Affiliate Member of the Theoretical Astrophysics Program at the University of Arizona. He joined the department in 2009. His research interests are in the origin of cosmic-rays, the particle acceleration/transport and the turbulence generation at shocks emitted in multi-scale explosive phenomena, as well as coronal mass ejections from the Sun, supernovae, and gamma-ray bursts (GRBs).

Prior to joining LPL, Federico held a postdoctoral appointment at Brera Astronomical Observatory (Italy) with the Swift mission for GRBs, before moving on to work as a Postdoctoral Fellow at CEA/Saclay (France), where his research was on numerical simulations of cosmic-rays and convective instabilities at supernova remnant shocks.

In his free time, Federico enjoys swimming and tennis, playing the violin, and cooking. He also enjoys time with his wife, renaissance art historian Evgenia Diakonenko, and his two children.