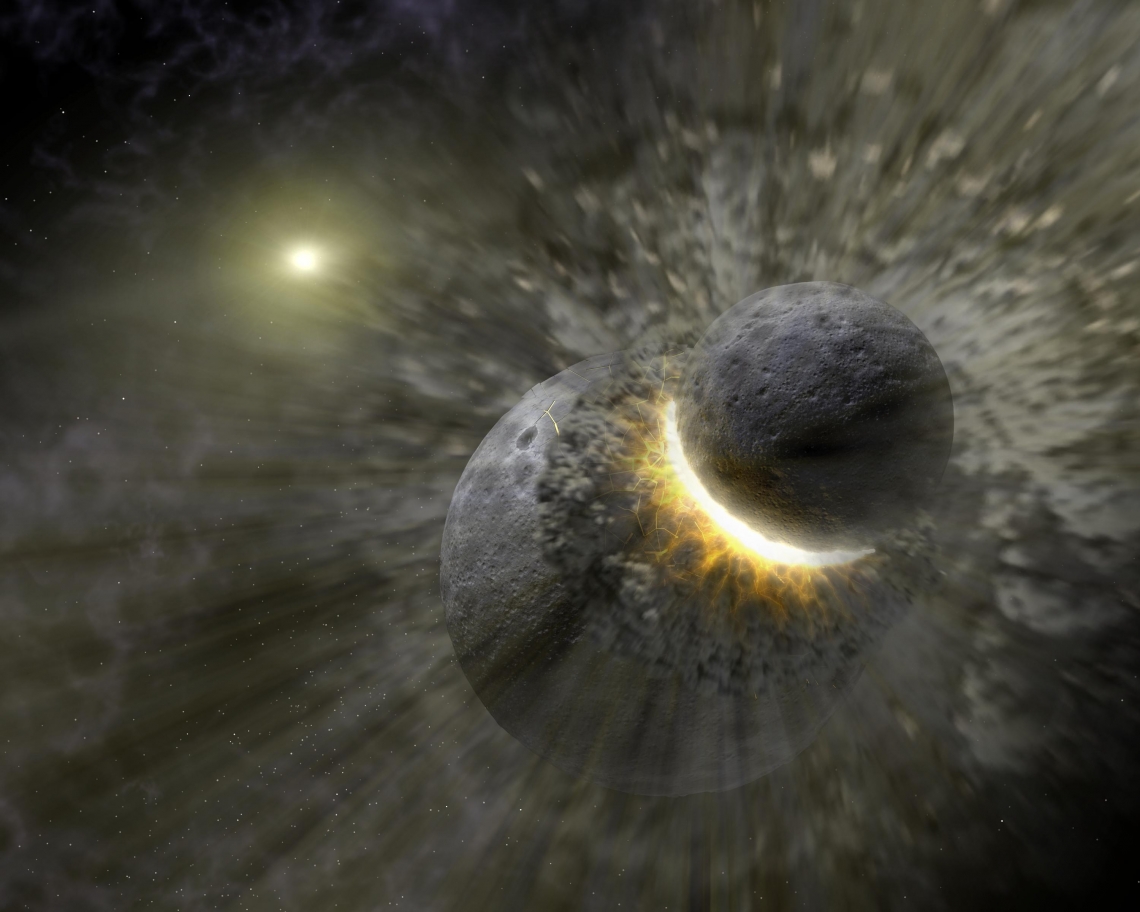 Based on analyses of lunar rock samples that Apollo and other space missions brought back to Earth, scientists know more about Earth's moon than any other planetary body. However, questions continue to vex scientists regarding how a planet forms a moon, and why some planets have moons while others do not.

In a new paper published in Nature Communications, researchers from the University of Rochester, University of Arizona and Tokyo Institute of Technology have made an important discovery that helps unravel the mysteries of the moon. The new study proposes that planets have to be of a certain makeup and within a limited mass range for moons to form.

"The question we set out to answer is: Can all planets form substantial moons?" said study co-author Erik Asphaug, a professor in UArizona Lunar and Planetary Laboratory.

As scientists continue to explore the possibility of other life in the universe, the research has important implications for determining the factors that make a planet habitable. A planet may not require a large moon to be habitable, but Earth's moon is vitally important in shaping life as we know it: It controls the length of the day and ocean tides, which affect the planet's biological cycles. The moon also contributes to Earth's climate by stabilizing its spin axis, offering an ideal environment for life to develop and evolve.

"By understanding moon formations, we have a better constraint on what to look for when searching for Earthlike planets," said lead study author Miki Nakajima, an assistant professor of Earth and environmental sciences at the University of Rochester. "We expect that exomoons (moons orbiting planets outside our solar system) should be everywhere, but so far we haven't confirmed any. Our constraints will be helpful for future observations."

Earth is the only known planet to host life and has a number of features that make it unique. These include active plate tectonics, a strong magnetic field and a moon that is quite large. More than a quarter of the size of Earth, the moon raises tides in the oceans that are important to life, so researchers have conjectured that a moon may be a potentially beneficial feature for harboring life on other planets.

It is generally accepted that Earth's large moon was generated by a collision between proto-Earth and another planet about 4.5 billion years ago. The collision resulted in the formation of a disc of mostly melted, partially vaporized rock that eventually became the moon.

To find out whether other planets can form similarly large moons, the researchers conducted 3D computer simulations, starting with a number of hypothetical planets of varying masses. The fledgling planets either had an architecture similar to Earth's – namely a mantle of rock and a core of iron – or they were icy planets in which the mantle is water ice and the core is rock.

They found that if the planet is too massive, giant impacts produce discs consisting entirely of vapor. This is because impacts between more massive planets are more energetic and happen at higher velocity. Over time, the vapor disc from such an impact cools, and liquid moonlets – the building blocks of moons – are formed.

"These growing moonlets experience a strong drag force as they plow through the vapor disc, which slows them down," Asphaug said. "Before long, they succumb to the gravity of the planet and fall into it, without making a moon."

Once the disc has cooled off and its vapor has begun to dissipate, moonlets face less drag and stand a better chance of growing into moons. However, by that time, a significant portion of them have been lost to the planet. The researchers conclude that a vapor-only disc is not capable of forming large moons. The disc has to start off initially low in vapor for the moonlets to grow without experiencing strong gas drag.

"Giant impacts work great at making moons, but only to a point," Asphaug said.

The results provide important guideposts for researchers studying planets in other solar systems, according to the authors. In particular, some planets are too massive to form a sizable moon. Computer simulations showed that rocky planets more than six times the mass of Earth – so-called super-Earths – end up with vapor-only discs, meaning that a large moon could not grow. The same is true for planets with a water-rich or icy composition whose mass exceeds that of Earth; they, too, will end up with vapor-only disks and no moon.

Thousands of exoplanets have been discovered, but astronomers have yet to definitively spot a moon orbiting a planet outside our solar system.

"We're still a long way off until we learn the different kinds of moons that orbit the exoplanets that are out there," Asphaug said.

"The exoplanet search has been focused on large planets, typically larger than 1.6 Earth radii (60% larger than Earth)," Nakajima said. "We are proposing that, instead, we should look at smaller planets because they are probably better candidates to host fractionally large moons."

The research is based on computer simulations that are the result of efforts since the 1980s to understand how Earth's moon formed as the result of a giant impact at the end of Earth’s formation, Asphaug said.

"Most of the focus so far has been on how the Earth's moon came to be, but we think the moon started off as a flying magma ocean, not mostly vapor,” he said, referring to the disc of molten rock around the early Earth. "These moonlets were able to accrete into the major body that we know and love."