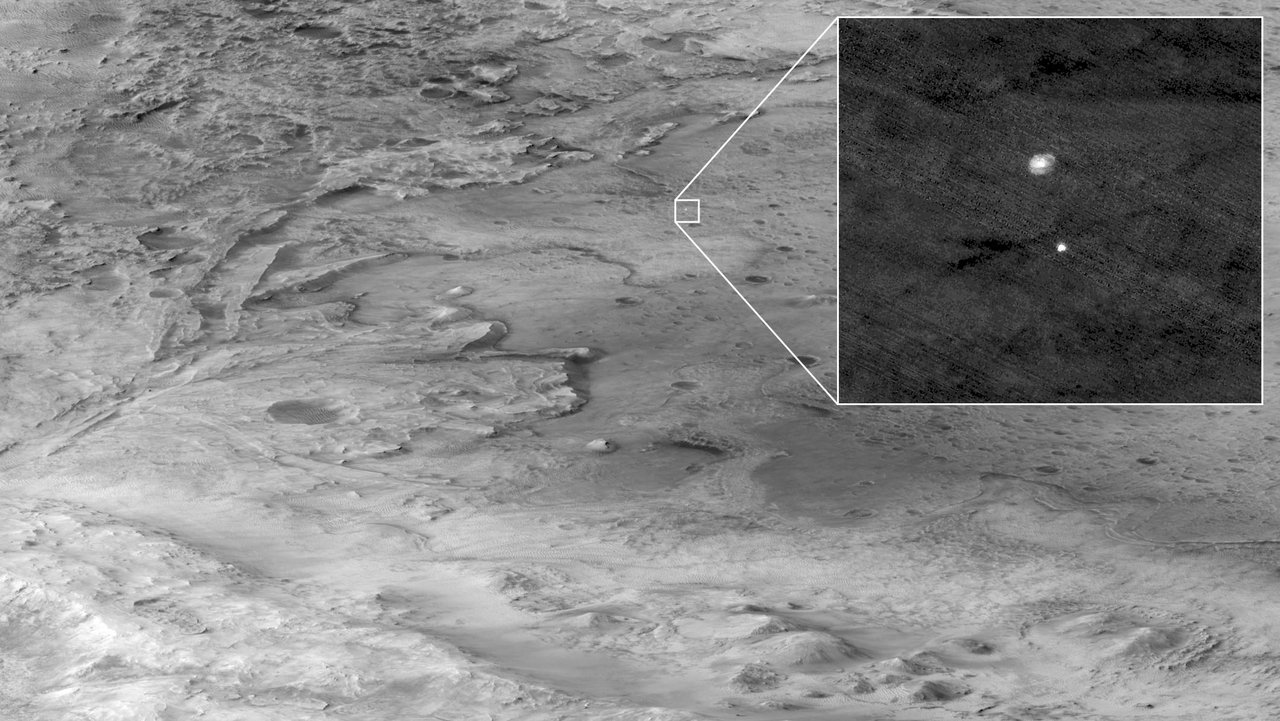 The University of Arizona-operated High Resolution Imaging Experiment camera aboard the Mars Reconnaissance Orbiter captured the Feb. 18 descent of NASA's Mars 2020 Perseverance rover, the latest rover to touch down on the Red Planet. In the image above, Perseverance's landing capsule can be seen falling through the Martian atmosphere, with its parachute trailing behind.

Since entering the orbit of Mars in March of 2006, the HiRISE camera, provided and operated by the UArizona Lunar Planetary Laboratory, has photographed the surface of the Red Planet in unprecedented detail. The camera also provided data that helped Perseverance navigate to its designated landing site.

NASA's Mars 2020 mission is the first to land not just a surface vehicle, but also an air-going vehicle in the form of a drone strapped to the underside of the rover.

The mission faced a challenging landing on the Red Planet. It touched down in Jezero Crater, a 28-mile-wide expanse full of steep cliffs, boulder fields and other obstacles that could have jeopardized the landing. In the HiRISE image, an ancient river delta, which is the target of the Perseverance mission, can be seen entering Jezero Crater from the left.

Shane Byrne, a UArizona planetary sciences professor and acting principal investigator of HiRISE, explained how TRN works: "The lander takes pictures of the ground as it approaches and compares that to an onboard map of the surface, so it can figure out where it is and can actually fly to the right location and achieve a very accurate landing position."

The HiRISE camera captured images of the landing site at a resolution of less than a foot per pixel, Byrne explained. Maps were then created from that data and stored in the memory of the Perseverance lander.

"Especially when the rover gets close to the surface, it needs the higher resolution images to be able to compare what its cameras are seeing to what is actually on the ground below," he said.

At the time the descent image was taken, HiRISE was approximately 435 miles from Perseverance and traveling at about 6,750 mph. The extreme distance and high speeds of the two spacecraft were challenging conditions that required precise timing and for the Mars Reconnaissance Orbiter to pitch upward and roll hard to the left so that Perseverance was viewable by HiRISE at just the right moment.

To make the descent image possible, the HiRISE team worked closely with the spacecraft team at Lockheed Martin and the mission team at NASA's Jet Propulsion Laboratory. The group put together a sequence of maneuvers so that HiRISE's field of view swept across the descending rover at exactly the right time and exactly the right speed, Byrne said.

"On our end, we take parameters for the settings of the camera, such as exposure times and the best amount of contrast, that will result in the best possible image," Byrne said. "So, there are some calculations that go into this, but there also is some intuitive skill involved that our team has accumulated by taking these pictures for over a decade now."

Even prior to the Perseverance landing, HiRISE had been instrumental in determining landing sites for surface missions, including NASA's UArizona-led Phoenix Mars Lander and the Mars Curiosity Rover, which has been roaming the surface of the Red Planet since 2012.

Maneuvering the Mars Reconnaissance Orbiter into position for taking a descent image like this one takes fuel, obviously, but according to Byrne, the orbiter carries enough fuel onboard to continue operating at least until the late 2020s and possibly beyond.