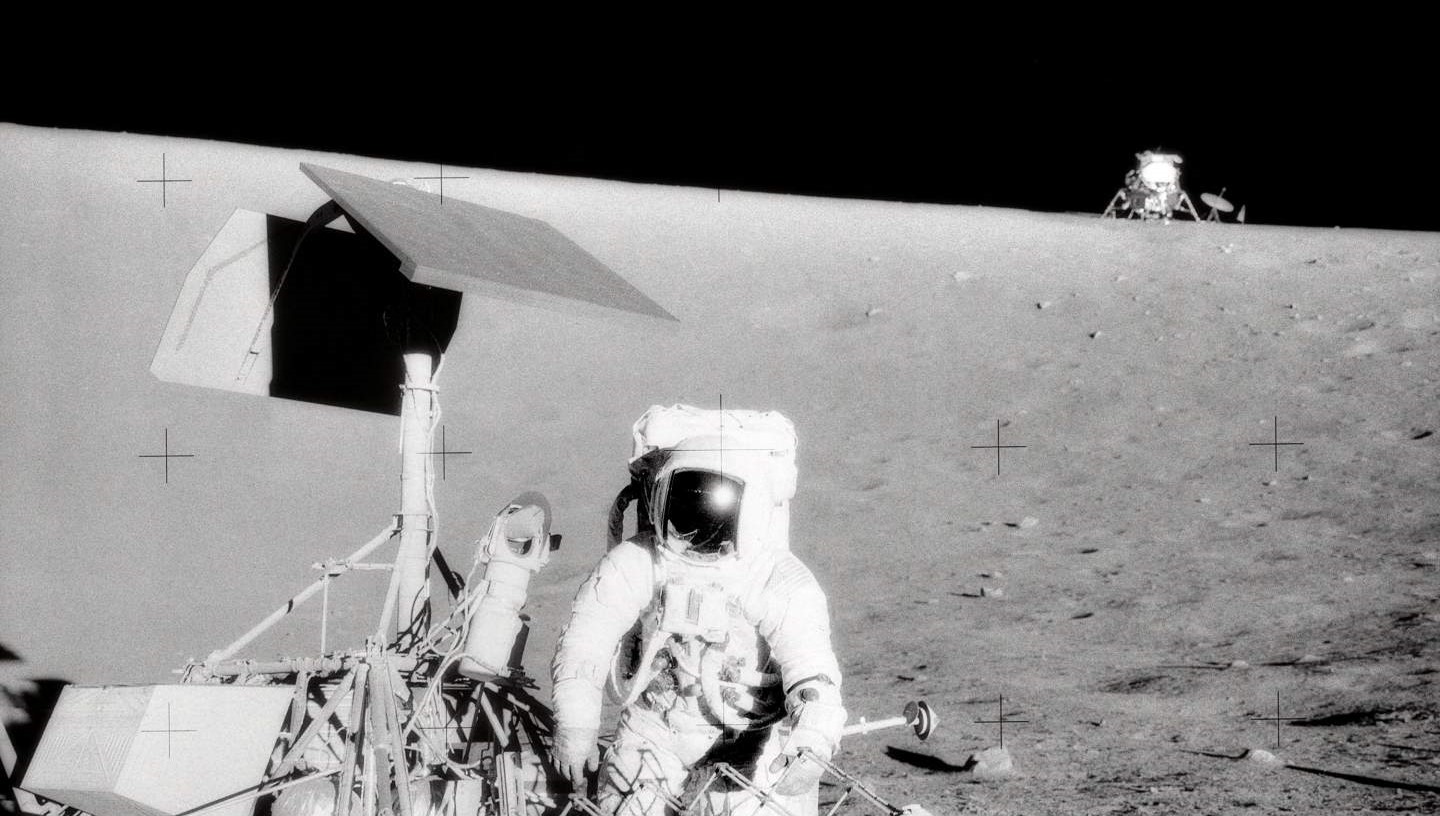 The Eagle swooped over the craggy, monochromatic terrain, keenly searching for a smooth landing place. Nothing but an unwelcoming host of craters and boulders streamed below. Pushing its limits, it flew on.

The Apollo 11 Lunar Module touched down in the Sea of Tranquility, in what could be considered one of the greatest human accomplishments. But with its fuel nearly drained, the Eagle landed nearly four miles from the intended landing site. During the next mission, NASA sought to demonstrate a pinpoint landing with “Intrepid,” the Lunar Module of the Apollo 12 mission, which launched 50 years ago on Nov. 14, 1969.

Five days later, two Apollo 12 astronauts – Pete Conrad and Alan Bean – climbed out of Intrepid. They were only 600 feet (about two football fields) from their target location – the landing site of lunar lander Surveyor 3.

The feat was accomplished thanks to the work of University of Arizona planetary scientist Ewen Whitaker and a team led by Gerard Kuiper, the father of modern-day planetary science and founder of the Lunar and Planetary Laboratory.

When President John F. Kennedy announced in 1961 that Americans would walk on the surface of the moon by the decade’s end, Whitaker, Kuiper and their team were already imaging and mapping the lunar surface. Their efforts to produce the first photographic lunar atlases of the moon and their partnerships with the university’s geology department and the astrogeology branch of the United States Geological Survey gave them a deep understanding of the moon’s geology and geography.

As a result, the team played a key role in the series of robotic spacecraft that visited the moon ahead of the Apollo missions.

Surveyor 1, the first of seven unmanned lunar landers in a program that ran from June 1966 through January 1968, reached the surface of the moon on June 2, 1966 and sent back panoramic photos from its travels. Surveyor 1’s success reassured the astronauts they would not be swallowed by dust.

When NASA published what they thought was Surveyor 1's correct landing site in the journal Science, Whitaker disagreed. He demonstrated his peerless prowess of lunar geography when he correctly identified Surveyor 1’s landing site after poring over images taken by the Lunar Orbiter and matching lunar features in photos with moon maps. Whitaker published the alternate location in the September issue of Science. His skills earned him the task of locating four more Surveyor landing sites, including Surveyor 3, which landed on the moon in the western Oceanus Procellarum (Ocean of Storms) on  April 20, 1967.

To demonstrate a pinpoint landing with Apollo 12, NASA used Whitaker’s location of Surveyor 3 as the target. The location also gave the crew a chance to return parts of the robotic explorer Surveyor 3, which had been on the moon since 1967, for assessment after more than two years in space.

Finding Surveyor 3 was more difficult than Surveyor 1 because Surveyor 3 had landed in a crater, meaning there were limited landmarks to rely upon.

“I’m sure Ewen Whitaker was holding his breath as the astronauts climbed out of the lunar module,” said Jim Scotti, an astronomer with SPACEWATCH, the UArizona group dedicated to detecting near-earth objects. “Surveyor 3 had been in darkness as the Lunar Module came in for a landing.”

Whitaker’s location was so spot on that the astronauts were able to walk to Surveyor 3.

“The iconic image, for me, of Apollo 12 is the astronaut Pete Conrad standing by Surveyor 3 with the lunar lander in the background,” said Tim Swindle, director of the UArizona Lunar and Planetary Laboratory.

Scotti has often joked that by becoming a space artist, astronaut Alan Bean, who snapped that iconic image, made up for damaging the sensors of the first color television camera on the moon’s surface when he accidentally pointed it toward the sun.

Luckily, becoming an artist also brought Bean to Tucson – a hub for space art – where he met Whitaker about 30 years after leaving the moon.

Scotti, a space artist himself, was there to witness the first meeting of the two people responsible for the success of Apollo 12.

“Ewen Whitaker and I were in line together to meet Alan Bean,” Scotti said. “He had brought photographs that he used to find Surveyor and was going to ask Bean to sign them. When he eventually did, it was like watching two best friends chatting back and forth like they’d known each other for years.”