To Understand the Machinery of Life, a UArizona Scientist Breaks it on Purpose 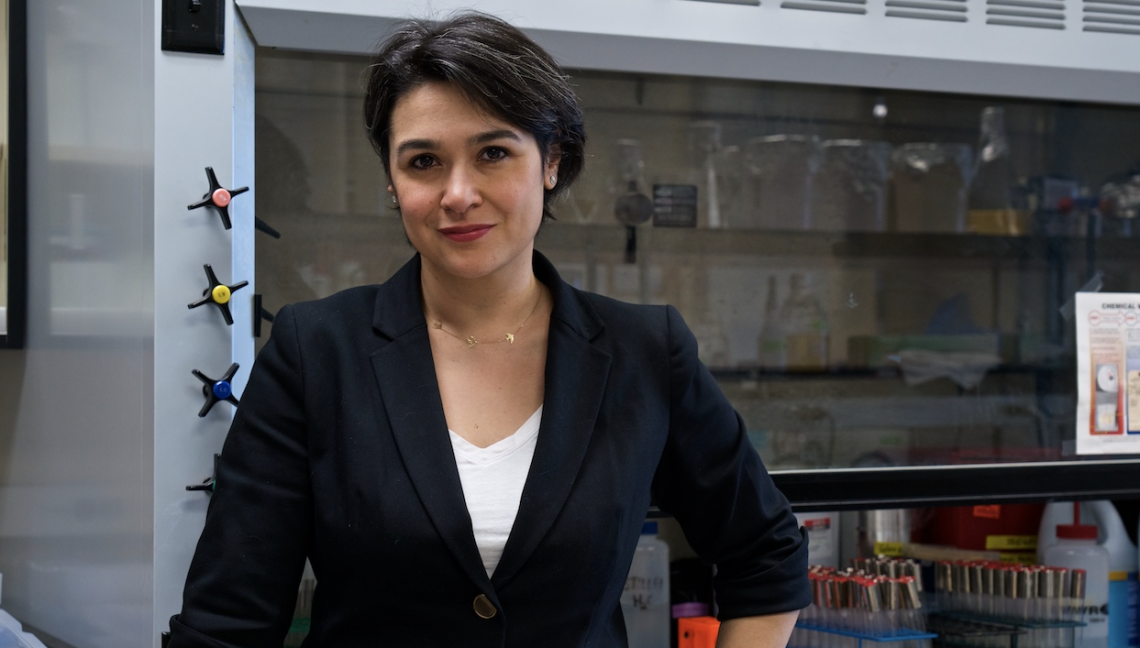 "I'm fascinated with life, and that's why I want to break it."

This is how Betül Kaçar, an assistant professor at the University of Arizona with appointments in the Department of Molecular and Cellular Biology, Department of Astronomy and the Lunar and Planetary Laboratory, describes her research. What may sound callous is a legitimate scientific approach in astrobiology. Known as ancestral sequencing, the idea is to "resurrect" genetic sequences from the dawn of life, put them to work in the cellular pathways of modern microbes – think Jurassic Park but with extinct genes in place of dinosaurs, and study how the organism copes.

In a recent paper published in the Proceedings of the National Academy of Sciences, Kaçar's research team reports an unexpected discovery: Evolution, it seems, is not very good at multitasking.

Kaçar uses ancestral sequencing to find out what makes life tick and how organisms are shaped by evolutionary selection pressure. The insights gained may, in turn, offer clues as to what it takes for organic precursor molecules to give rise to life – be it on Earth or faraway worlds. In her lab, Kaçar specializes in designing molecules that act like tiny invisible wrenches, wreaking havoc with the delicate cellular machinery that allows organisms to eat, move and multiply – in short, to live.

Kaçar has focused her attention on the translation machinery, a labyrinthine molecular clockwork that translates the information encoded in the bacteria's DNA into proteins. All organisms – from microbes to algae to trees to humans – possess this piece of machinery in their cells.

The translational machinery is a vital component in the cells of all organisms. Having undergone very little change over billions of years of evolution, it has been referred to as "an evolutionary accident frozen in time." At its core is the ribosome (blue), which translates genetic information stored in RNA strands into proteins, the building blocks of life.National Science Foundation

"We approximate everything about the past based on what we have today," Kaçar said. "All life needs a coding system – something that takes information and turns it into molecules that can perform tasks – and the translational machinery does just that. It creates life's alphabet. That's why we think of it as a fossil that has remained largely unchanged, at least at its core. If we ever find life elsewhere, you bet that the first thing we'll look at is its information processing systems, and the translational machinery is just that."

So critical is the translational machinery to life on Earth that even over the course of more than 3.5 billion years of evolution, its parts have undergone little substantial change. Scientists have referred to it as "an evolutionary accident frozen in time."

"I guess I tend to mess with things I'm not supposed to," Kaçar said. "Locked in time? Let's unlock it. Breaking it would lead the cell to destruction? Let's break it."

The researchers took six different strains of Escherichia coli bacteria and genetically engineered the cells with mutated components of their translational machinery. They targeted the step that feeds the unit with genetic information by swapping the shuttle protein with evolutionary cousins taken from other microbes, including a reconstructed ancestor from about 700 million years ago.

"We get into the heart of the heart of what we think is one of the earliest machineries of life," Kaçar said. "We purposely break it a little, and a lot, to see how the cells deal with this problem. In doing this, we think we create an urgent problem for the cell, and it will fix that."

Next, the team mimicked evolution by having the manipulated bacterial strains compete with each other – like a microbial version of "The Hunger Games." A thousand generations later, some strains fared better than others, as was expected. But when Kaçar's team analyzed exactly how the bacteria responded to perturbations in their translational components, they discovered something unexpected: Initially, natural selection improved the compromised translational machinery, but its focus shifted away to other cellular modules before the machinery's performance was fully restored.

To find out why, Kaçar enlisted Sandeep Venkataram, a population genetics expert at the University of California, San Diego.

Venkataram likens the process to a game of whack-a-mole, with each mole representing a cellular module. Whenever a module experiences a mutation, it pops up. The hammer smashing it back down is the action of natural selection. Mutations are randomly spread across all modules, so that all moles pop up randomly.

"We expected that the hammer of natural selection also comes down randomly, but that is not what we found," he said. "Rather, it does not act randomly but has a strong bias, favoring those mutations that provide the largest fitness advantage while it smashes down other less beneficial mutations, even though they also provide a benefit to the organism."

In other words, evolution is not a multitasker when it comes to fixing problems.

"It seems that evolution is myopic," Venkataram said. "It focuses on the most immediate problem, puts a Band-Aid on and then it moves on to the next problem, without thoroughly finishing the problem it was working on before."

"It turns out the cells do fix their problems but not in the way we might fix them," Kaçar added. "In a way, it's a bit like organizing a delivery truck as it drives down a bumpy road. You can stack and organize only so many boxes at a time before they inevitably get jumbled around. You never really get the chance to make any large, orderly arrangement."

Why natural selection acts in this way remains to be studied, but what the research showed is that, overall, the process results in what the authors call "evolutionary stalling" – while evolution is busy fixing one problem, it does at the expense of all other issues that need fixing. They conclude that at least in rapidly evolving populations, such as bacteria, adaptation in some modules would stall despite the availability of beneficial mutations. This results in a situation in which organisms can never reach a fully optimized state.

"The system has to be capable of being less than optimal so that evolution has something to act on in the face of disturbance – in other words, there needs to be room for improvement," Kaçar said.

Kaçar believes this feature of evolution may be a signature of any self-organizing system, and she suspects that this principle has counterparts at all levels of biological hierarchy, going back to life's beginnings, possibly even to prebiotic times when life had not yet materialized.

With continued funding from the John Templeton Foundation and NASA, the research group is now working on using ancestral sequencing to go back even further in time, Kaçar said.

"We want to strip things down even more and create systems that start out as what we would consider pre-life and then transition into what we consider life."