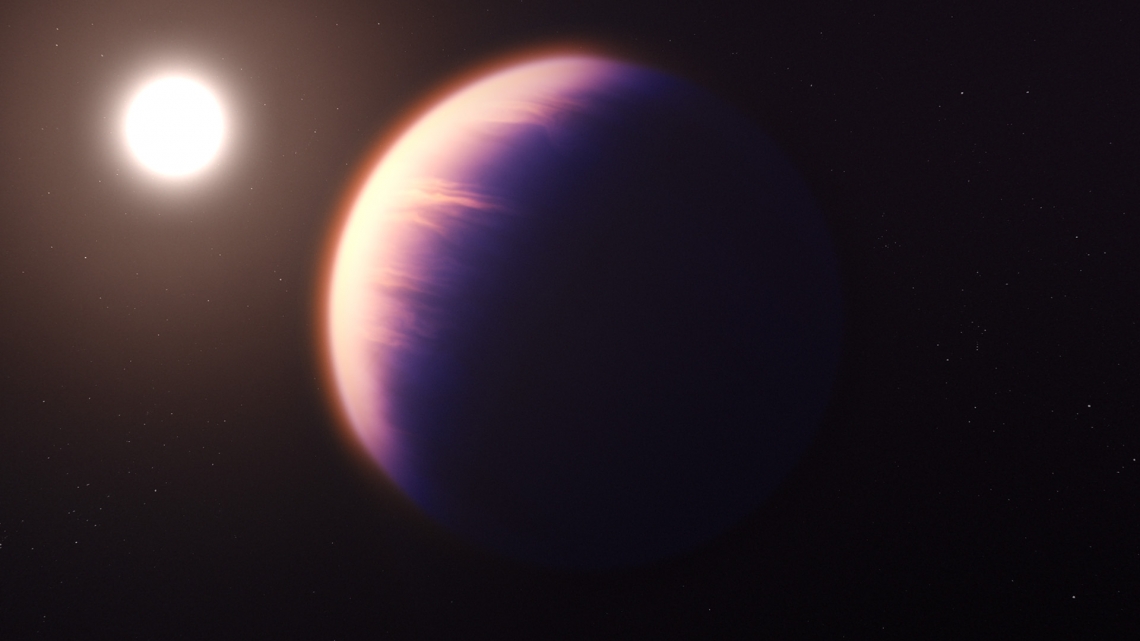 Since NASA's James Webb Space Telescope began operations, breathtaking images offering never-before-seen views of the Milky Way have captured the imagination of people around the world. But for a team of astronomers at the University of Arizona, the most exciting finding so far is an unassuming diagram showing a squiggly line with a bump in it.

An international research team used Webb's Near-Infrared Spectrograph, or NIRSpec, to observe the exoplanet WASP-39 b. In the spectrum of the exoplanet's atmosphere, a small bump or "hill" in wavelengths between 4.1 and 4.6 microns presents the first-ever clear, detailed evidence of carbon dioxide in a planet outside the solar system.

"There are lots of things that absorb around that range," said Sarah Moran, a postdoctoral research associate in the UArizona Lunar and Planetary Laboratory and co-author of a forthcoming Nature paper detailing the discovery. "Based on observations with Hubble, we could only guess what the atmosphere of this planet is like, and we suspected it might carbon dioxide, but seeing this exact point in the JWST data, we know that it's CO2."

The discovery marks the first time carbon dioxide has been detected in the atmosphere of a planet outside the solar system, in this case in the atmosphere of WASP-39 b, a giant gas planet orbiting a sun-like star 700 light-years away. The discovery showcases the extraordinary capabilities of JWST and ushers in a new era of scanning the Milky Way for planets that may support life.

WASP-39 b is a hot gas giant with a mass roughly one-quarter that of Jupiter (about the same as Saturn) and a diameter 1.3 times greater than Jupiter. Unlike the cooler, more compact gas giants in our solar system, WASP-39 b orbits very close to its star – only about one-eighth the distance between the sun and Mercury – completing one circuit in just over four Earth days. The planet's discovery, reported in 2011, was made based on ground-based detections of the subtle, periodic dimming of light from its host star as the planet transits, or passes in front of the star.

Understanding the composition of a planet's atmosphere is important because it tells scientists something about the origin of a planet and how it evolved. Carbon dioxide molecules specifically contain information about the way a planet formed, for example how much gaseous material was used to form a gas giant planet.

"Previous observations with radio telescopes allowed us to see the individual ingredients that go into making planets, but now we can really start pulling apart what they look like after planet formation," said paper co-author Thomas Beatty, a former assistant research professor in UArizona's Steward Observatory who is now a faculty member at the University of Wisconsin.

"You could say we have seen the flour, the eggs and the butter sitting on the counter, but until the JWST became operational, we haven't been able to actually pick apart the cake and figure out how it's put together," Beatty said.

No observatory has ever measured such subtle differences in brightness of so many individual colors across the 3 to 5.5-micron range in an exoplanet transmission spectrum before. Access to this part of the spectrum is crucial for measuring abundances of gases like water and methane, as well as carbon dioxide, all of which are thought to exist in many different types of exoplanets.

Transiting planets like WASP-39 b, whose orbits we observe edge-on rather than from above, can provide researchers with ideal opportunities to probe planetary atmospheres. During a transit, some of the starlight is eclipsed by the planet completely – causing the overall dimming – and some is transmitted through the planet's atmosphere. Because different gases absorb different combinations of colors, researchers can analyze small differences in brightness of the transmitted light across a spectrum of wavelengths to determine exactly what an atmosphere is made of. With its combination of inflated atmosphere and frequent transits, WASP-39 b is an ideal target for this technique known as transmission spectroscopy . While JWST is not designed to spot life on other planets – if it exists – it is poised to identify potentially habitable planets, according to Beatty.

"There probably are a lot of places out there that are just lumps of rock with no atmosphere, so distinguishing between those and a world that does have an atmosphere is important at this stage," he said. "At this point, we have no idea we see all these planets that are roughly the same size of Earth, and for all we know, they could be worlds as hostile as Venus or as habitable as Earth."

This NIRSpec observation of WASP-39 b is just one part of a larger investigation that includes observations of the planet using multiple Webb instruments, as well as observations of two other transiting planets. The investigation, which is part of the Early Release Science program, was designed to provide the exoplanet research community with robust Webb data as soon as possible.

"The goal is to analyze the Early Release Science observations quickly and develop open-source tools for the science community to use," explained Vivien Parmentier, a co-investigator at Oxford University. "This enables contributions from all over the world and ensures that the best possible science will come out of the coming decades of observations."

According to co-author Everett Schlawin, an assistant research professor at UArizona's Steward Observatory, many steps are necessary to tease out a result like the this from the raw data recorded by the space telescope. When starlight passes through a planet's atmosphere, it is spread out into its different colors, which the researchers have to convert into what is known as a light curve.

"There is a lot of noise in the data because you have all this starlight come at you, but you only want to analyze the tiny sliver of light that passed through the atmosphere," he said.

According to Moran, an important part of this work involves creating computer models that take into account various atmospheric compositions and conditions.

"To borrow the analogy of the cake, we know that you need eggs and butter and flour, but the tricky part is getting the balance of those things right," Moran said. "For example, we put this amount of hydrogen, this amount of CO2 or this amount of water our models. We then play with the balances of those ingredients and the temperature to see which 'recipe' best matches the observational data to understand what the planet is like."

Not surprisingly, it took the team a while to really be sure of the data, Schlawin said, but the end results surpassed expectations.

"When I showed the very first image to colleagues, they asked, 'Am I looking at your modeling data or the actual data from the telescope?' – that's how good these observations are," he said.

Beatty said the difference in the quality of the JWST data compared to what was previously available is like "jumping from an old-school TV to a 4K high-definition TV."

"Being able to see these things suddenly in this sharp detail is very exciting," he said. "I think our understanding of exoplanets is going to be completely different five years from now than what it is today."

UArizona exoplanet researchers are particularly excited about what the new space observatory will reveal about new categories of planets that have no counterpart in the solar system, like super Earths – worlds that rival gas giants in size but whose composition resembles that of terrestrial planets. The observations reported here are indicative of Webb's ability to detect and measure carbon dioxide in exoplanet atmospheres, whether they be thick, puffy atmospheres of giants like WASP-39b or tenuous gas envelopes of small, rocky planets.

"We really have no idea how many of these planets have atmospheres at all, which is definitely the first thing you would need to form life on the surface of the planet," said Megan Mansfield, a NASA Sagan Fellow at Steward Observatory who also is a co-author of the Nature paper. "We are going to be able to start taking these first steps to look for life on other planets."

The UArizona contributions to this effort included atmospheric chemistry studies by Mark Marley, head of the Lunar and Planetary Laboratory. The James Webb Space Telescope is the world's premier space science observatory. Webb will solve mysteries in our solar system, look beyond to distant worlds around other stars, and probe the mysterious structures and origins of our universe and our place in it. Webb is an international program led by NASA with the European Space Agency and the Canadian Space Agency.