From Points of Light to Worlds: UA Explores the Solar System 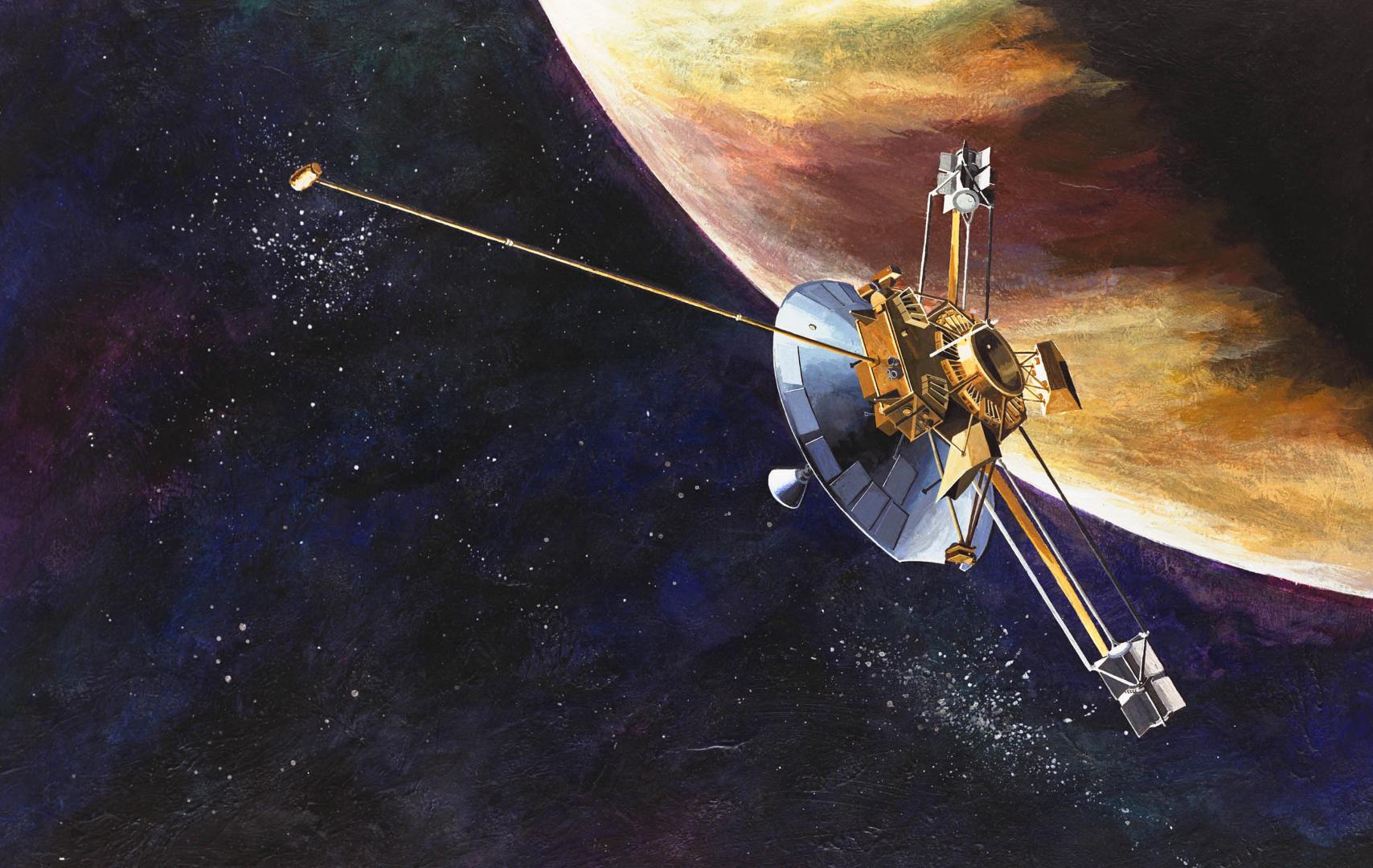 Here's a fun thought: Imagine if University of Arizona scientists got to keep a replica of the spacecraft for every space mission in which they've been involved.

The collection of space-faring gadgets they would have amassed by now likely would fill all five stories of the UA's Kuiper Space Sciences Building. Tourists from around the world would flock to campus, drawn by an array unlike any other, bristling with space probes, robotic rovers, extraterrestrial telescopes, glinting satellites and other ingenious apparatuses designed and launched over the past half-century of space exploration.

From Probes to Planetary Science

The first exhibit a visitor to our imaginary exhibit of space memorabilia would come across is Ranger, a series of lunar reconnaissance probes designed to record high-resolution images of the lunar surface during a descent ended by a deliberate crash-landing.

Next would be Surveyor, a series of three-legged, solar-panel-topped contraptions NASA sent to the moon between 1966 and 1968 to test the feasibility of soft landings on the moon's sea of dust. Both missions have deep ties to the beginnings of planetary science at the UA.

Not many people can say they were there when a new area of science was born, but Steve Larson can. Larson first got his feet wet – or rather, his boots dusty – trotting across lava fields and volcanic craters during field trips as one of the first freshmen to study planetary science at the UA, soon after Gerard Kuiper founded the university's Lunar and Planetary Laboratory, or LPL.

Ranger and Surveyor were crucial in paving the way for the first manned moon landing in at the end of the decade, and NASA enlisted the help of Kuiper and Eugene Shoemaker, a contemporary planetary scientist who served as the first director of the United States Geological Survey's Astrogeology Research Program.

"Those two were the only people who knew about this stuff," Larson says. "They agreed that Kuiper would do Ranger, and Shoemaker would do Surveyor."

Larson remembers being in Kuiper's' office once with Shoemaker there. Spread out on the table was a large print of the moon surface.

"Kuiper was used to observing through telescopes, so he wanted south to be up, and Shoemaker worked with maps, so he wanted north to be up," Larson says. "They ended up standing at opposite ends of the table, pointing out features on the map, and both were perfectly happy."

The episode illustrates how planetary science came into existence – through an enthusiastic, at times rocky, marriage of disciplines that traditionally didn’t have much to do with each other. Astronomers who knew how to operate telescopes were needed just as much as geologists who understood the inner workings of planetary bodies; physicists and engineers were crucial in inventing and advancing various methods of imaging and detection, as well as chemists adept at teasing out mineral compositions from meteorite samples.

Hubbard, who was trained as an astronomer, remembers teaching the first planetary science course offered to undergraduate students. Unsure of what such a course should entail, Hubbard teamed up with Mike Drake, a young and energetic colleague who, like Hubbard, would later serve as department head. Each would teach half of the course, and to help each other evaluate and improve their teaching, the two sat in on each other's lectures to observe.

"After I had sat through one of Mike's lectures, I said, 'Gee, I didn’t' know all this stuff,'" Hubbard says, "and Mike just laughed and said the same about my lecture. That taught us we had to be more aware of what other departments and other disciplines were doing."

Hubbard dedicated much of his career to unlocking the inner workings of planets in the outer solar system such as Jupiter, and although formally retired, he is involved with NASA's Juno spacecraft.

Juno's replica would be a commanding sight: The furthest venturing craft to rely on the sun for power, Juno is mostly solar panels that loom overhead like a windmill, large enough to cover a basketball court.

After Juno, tucked into a corner of the the LPL's imaginary hall of fame is what looks like a shoebox with an upside-down tripod mounted on its top. Built by Charles Sonett, the instrument, a magnetometer, traveled to the moon with Apollo 16 and gathered clues about the moon's core.

In 1973, Sonett had been invited by Kuiper to succeed him as the director of the LPL and first head of the newly minted planetary science department. Sonett was involved in spacecraft missions that dramatically advanced our understanding of the solar system and beyond, including the Pioneer, Explorer and Apollo programs. He is credited for expanding the LPL's research into cosmic riddles that could only be solved by sending robotic explorers out to space to investigate phenomena such as interplanetary plasma, a soup of particles, cosmic rays and dust embathing the solar system.

Planetary science had come into its own. Larson, one of the new department's first students and now a senior staff scientist at the LPL, remembers what he calls "electrifying times."

"If you wanted to study anything in the solar system, the UA simply was the place to be," he says. "Our planets evolved from points of light to actual worlds, and LPL has driven that evolution. When I first started, we looked at the points of light, and they became little discs. Now, a half century later, we land on them, we dig on them, and we bring samples back to Earth."

The plethora of spacecraft in the LPL's imaginary museum would bear witness to the story of how discs of light, one by one, were turning into worlds with exotic interiors, alien atmospheres and – in some cases – menageries of moons.

There was Pioneer, with its famous golden plaque sporting depictions of human figures in what was meant to be a greeting to other civilizations should any ever encounter the spacecraft. As the probe flew by Jupiter and Saturn, its spin swept a photopolarimeter, developed by former LPL professor Tom Gehrels, across the planets, assembling the first close-up images of the giant planets.

There were the Voyager probes, bearers of the famous "golden record." Voyager 2 took the only close-up images we have of Uranus and Neptune to this day, and its twin, Voyager 1, became the first manmade object to leave the solar system. The imaging team was led by former LPL professor Brad Smith.

Further down the hall would be Cassini-Huygens. A towering probe the size of a school bus, Cassini-Huygens brought the exquisite, otherworldly beauty of Saturn and its moons to desktop wallpapers worldwide. Many UA planetary scientists and their students were directly involved in this mission, which included the first landing on a moon other than Earth's. The descent imager aboard the Huygens lander, developed by an LPL team led by Martin Tomasko, captured its descent through the thick, hazy atmosphere of Saturn's moon Titan onto a frozen, alien landscape, including lakes of liquid methane.

Titan is also the target of Dragonfly, NASA's newly selected New Frontiers mission. Dragonfly will send a quadcopter drone to look for signs of life the icy moon's origins. The mission team includes – you guessed it – many former UA planetary science students.

"The first time you go to one of these places, you learn a lot," says current LPL Director Tim Swindle. "It's completely different from what you thought you knew from when you looked at it from afar. At LPL, we have been part of many of those first looks at these worlds."

Back to the Moon and on to Mars

Swindle is excited about the possibilities the next 50 years may hold in store for planetary exploration.

"We are going back to the moon, where we'll be doing all sorts of new experiments on the surface," he says. "The things we are doing right now with OSIRIS-REx to prepare for sample return from asteroid Bennu are the same things we'll be doing to prepare to bring back samples from Mars."

Swindle also is confident that LPL programs, which have found about half of the known near-Earth asteroids, will continue to lead the way in discovering more.

"Once we start further exploring asteroids, we'll send mining robots rather than exploration robots," he says, "and perhaps some day, even people. I think LPL will be a part of all that."

Who knows, 50 years from now, a space exploration museum on the UA campus may be a reality, as well. Until then, visitors to the Charles P. Sonett Space Science building, across the street from Flandrau Science Center & Planetarium, can peer down the telescope barrel on a life-size model of the UA-led HiRISE camera, which has been photographing Mars in stunning detail for more than 10 years.

Learn more about the Lunar and Planetary Laboratory's space exploration efforts in the current and former space mission rosters.