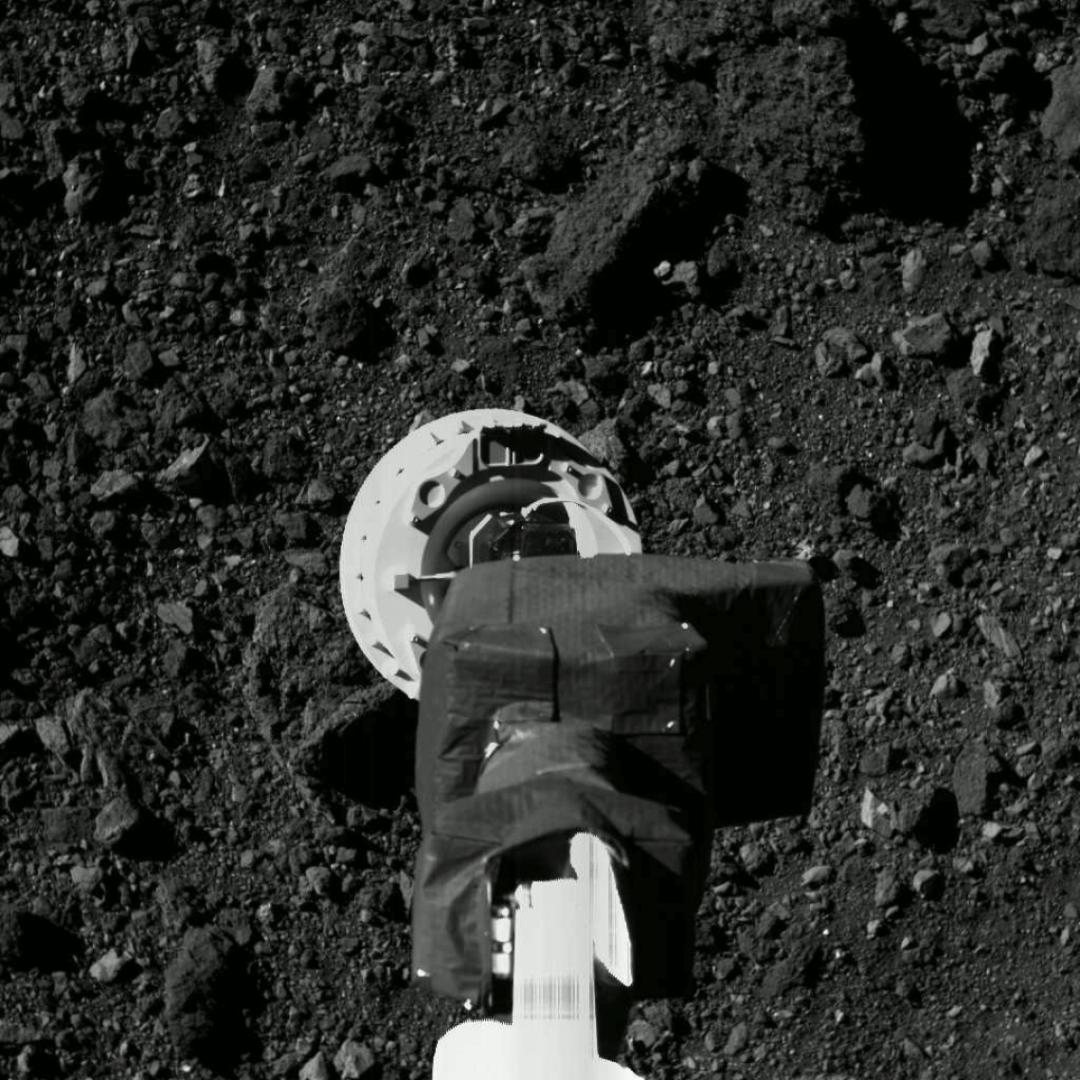 The University of Arizona-led OSIRIS-REx mission is poised to accomplish a first for NASA in planetary science: collect a sample from a near-Earth asteroid and bring it back home. The composition of the asteroid Bennu could shed more light on the origins and evolution of the 4.5 billion-year-old solar system.

On Oct. 20, the spacecraft will begin a flight trajectory to descend to the asteroid’s surface. Then, it will extend a sample collection arm that will briefly touch the surface, fire a small puff of compressed nitrogen to kick up debris and capture it before storing it in the body of the spacecraft for safekeeping on the two-year journey home.

Sept. 26 marks 25 days until the Touch-And-Go, or TAG, sample collection event, after which the spacecraft will stow the sample for its return to Earth on Sept. 24. 2023.

To celebrate the historic moment, UANews is counting down the 25 Days of "O-REx" with 25 facts.

25. This mission is a first for NASA. Several NASA spacecraft have studied asteroids from a distance, but none have touched an asteroid and returned with material. The mission was designed to return at least 60 grams (slightly over 2 ounces) of pristine asteroid material to Earth for analysis.

24. This image shows sample site Nightingale Crater, OSIRIS-REx’s primary sample collection site on asteroid Bennu. The image is overlaid with a graphic of the OSIRIS-REx spacecraft to illustrate the scale of the site.NASA/Goddard/University of Arizona

While scientists had predicted the asteroid's shape with uncanny accuracy, the surface of Bennu was unexpectedly rocky. The mission team spent over 18 months extensively surveying the surface for a boulder-free area before identifying Nightingale as the primary sample collection site and Osprey as the backup sample site.

23. The primary sample site, Nightingale, is located in a crater in Bennu's northern hemisphere and was determined to be the safest spot for the Touch-And-Go sample collection maneuver. For scale, the spacecraft's brief touchdown will be like parking a shuttle van in an area about as wide as three parking spaces. The site is one-tenth as large as the original mission plan envisioned.

22. On the journey back to Earth, the spacecraft will eject its sample return capsule containing the bits of Bennu for landing in the Utah desert on Sept. 24, 2023. The entire trip from launch to landing will have spanned seven years and 4.4 billion miles of space travel.

21. The asteroid is a time capsule from the early solar system. Made from the crumbs of what was left over after the formation of the solar system, it is rich with organic compounds that may have seeded life on Earth.

20. Bennu is about the same size as Pusch Ridge in the Santa Catalina Mountains, measuring about 500 meters, or about one-third of a mile, in diameter.

19. The asteroid Bennu is a near-Earth asteroid – meaning it is not part of the main asteroid belt – and is situated between 241,000 and 209 million miles away, depending on its orbit relative to Earth's. Right now, the asteroid and spacecraft are about 200 million miles from Earth.

18. Bennu is in an unstable orbit, meaning it likely won't last more than 10 million years before it collides with a planet or falls into the sun.

17. Evidence of water was discovered locked within the clays that make up the asteroid. While Bennu itself is too small to have ever hosted liquid water, liquid water was likely present at some time on Bennu's parent body, a much larger asteroid.

16. Bennu's temperatures range from 240 degrees Fahrenheit during the day to 100 below zero at night.

15. The mission marked a milestone recognized by the Guinness World Records. The spacecraft made the closest orbit of a planetary body and made the asteroid the smallest planetary object ever orbited by a spacecraft.

14. Bennu is shedding. It regularly ejects particles from its surface, highlighting just how dynamic the miniature world can be.

13. This global map of asteroid Bennu’s surface was created by stitching and correcting 2,155 PolyCam images. At 2 inches (5 cm) per pixel, this is the highest resolution at which a planetary body has been globally mapped.NASA/Goddard/University of Arizona.

The OSIRIS-REx mission's science team, headquartered at UArizona, created the most detailed image of any body in the solar system with its global mosaic of the asteroid Bennu. The mosaic was created by stitching together 2,155 images at a scale of 2 inches per pixel. The map was used to choose the primary and secondary sample sites.

12. When the spacecraft touches down for sampling, it will do so on autopilot due to the 18.5-minute time delay between Earth and the spacecraft.

11. The UArizona-built PolyCam is so named because it is a master of all trades and the world's best zoom lens – it can be a microscope and a telescope, and anything in between. It captured OSIRIS-REx's first image of the asteroid, helped with mapping large boulders and rocks and is expected to microscopically scrutinize tiny rocks and pebbles on the surface to ensure that they are small enough for sample collection.

10. UArizona also built the two other on-board cameras – MapCam, which was used to map the surface of the asteroid, and SamCam, which will record the entire sample collection event and verify that a sample was collected.

9. During its descent to site Nightingale, OSIRIS-REx could encounter several hazardous scenarios that would prevent it from collecting a sample of asteroid Bennu on its first attempt.NASA/Goddard/CI Lab

8. O-REx will perform a pirouette in space to weigh how much material was collected during the Touch-and-Go sample collection event.

7. While flying through space, the OSIRIS-REx spacecraft navigates using the stars, similar to ocean-going explorers.

6. Bits of the asteroid Vesta were recently found on Bennu.

5. A total of 150 UArizona undergraduate and graduate students have worked on OSIRIS-REx. More than 30 alumni have been hired to join the mission as staff after graduating.

4. The mission's economic impact on Arizona is around $230.5 million. Of that, approximately $173 million comes to Tucson.

3. UArizona professor Dante Lauretta is the principal investigator of the OSIRIS-REx mission, a $1 billion project led by the University of Arizona. The mission's science operations command center is at the UArizona Lunar and Planetary Laboratory.

2. OSIRIS-REx builds on the university's long legacy of successful planetary exploration. The university has been part of almost every major NASA planetary mission since they began. The most recent NASA missions include HiRISE (Alfred McEwen, principal investigator), Dawn Mission (Mark Sykes, co-investigator, and Shane Byrne, guest investigator); Juno Mission (William Hubbard, co-investigator); and the New Horizons Mission to Pluto (Veronica Bray, science team member). UArizona was the first public university to be awarded a principal investigator-led mission when it was chosen to lead the Phoenix Mars mission.

1. The mission is officially named the Origins, Spectral Interpretation, Resource Identification, Security-Regolith Explorer. Osiris is the Egyptian god of the underworld and "rex" means king in Latin. The mission objectives to return asteroid samples and analyze them in lab around the world loosely matches the mythological story of Osiris, whose body was cut into pieces and sprinkled all over Egypt, marking the spread of agriculture.

What Touching an Asteroid Can Teach Us